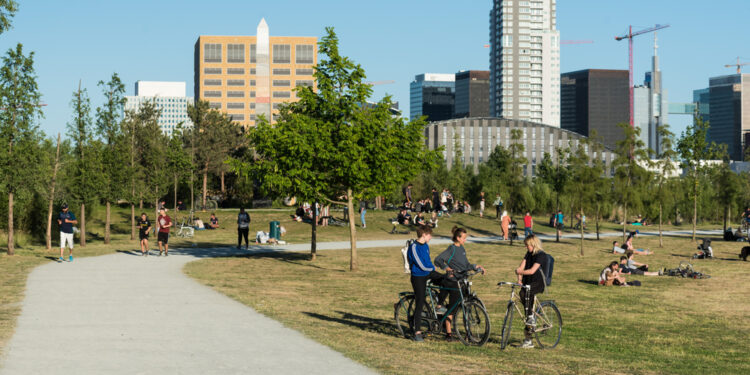 Brussels, (Brussels Morning)- A drama was avoided on Wednesday during the Peterbos fire, and that is partly due to the young people in the neighbourhood. “We carried the children, the elderly and people with limited mobility outside on our backs,” says a local resident. “People always talk bad about us, but these young people have put their lives and health on the line.”

It is calm around the residential blocks in Peterbos. Colored birthday flags at the community centre at block nine: resident Louis is allowed to blow out 94 candles. There’s nothing to suggest that a major conflagration was raging a little further than 48 hours ago , except near the eighteen-story apartment building, where the smell of smouldering smoke still lingers in the air at times.

The fire in a flat on the sixth floor of a recently renovated residential block is the third in as many years. As with a fire last year in September, young people came to the rescue of the fire brigade.

Then by trying to extinguish the fire with his own hands . Now by quickly bringing residents to safety and literally clearing the track for law enforcement. An action that may well have saved human lives.

“They moved two parked cars (by hand, ed.). This allowed for the car ladder to safely evacuate a lady with her baby. She was about to jump down,” said Brussels fire brigade spokesman Walter Derieuw.

The young people themselves do not like to tell their story. The media has too often lumped them together.

“I understand that,” says 40-year-old Saber, who lives on the eighteenth floor of the affected building. “But what these young people have done is very courageous.”

“In less than ten minutes, I, along with a few other residents and a dozen young people, were able to evacuate more than 80 percent of the building’s residents. We carried many of them on our backs – children, the elderly and people with reduced mobility. Also We were able to bring pets to safety.”

“People always talk badly about us, but these young people have risked their lives and health for others in very difficult circumstances. Unfortunately, we did not receive any thanks from the police and fire service.”

Amine and Niels, both active in Peterbos as community workers at Saamo (formerly Community Building), praise the solidarity among the residents after disaster struck.

“Young people and parents have helped everyone in need, for example the elderly and vulnerable people, quickly and efficiently. Fortunately, the woman who got ready to jump is doing well and that is largely due to the young people from the neighbourhood.”

Nine residents were overcome by the smoke and had to be taken to hospital. Among them Sylvie and Laurence.

“Fortunately, we were able to escape from the building in time, but we still feel the physical effects of the smoke: wheezing. A lot of people got through the eye of the needle, because most emergency exits were blocked and the fire climbed up quickly.”

Despite the strong solidarity, some affected residents feel abandoned in the aftermath of the fire. Not only Sylvie and Laurence, but also Danny – who lives just below the flat where the fire started – are thinking about leaving Peterbos, says BRUZZ.

“We wonder when everything will be technically in order again. We already live in precarious conditions here anyway and that makes it mentally difficult. And when a fire breaks out, there is unfortunately no follow-up or a psychologist who comes to visit.”

Saamo is in any case ready to assist the residents. “We also work here together with the OCMW and other organisations. Anyone with individual and specific questions can contact us. There are also many residents who feel lonely and such a fire can amplify certain feelings. That is why we strongly focus on meeting moments. It is very important to continue to work on social cohesion. The solidarity during the fire has shown that it is possible.”