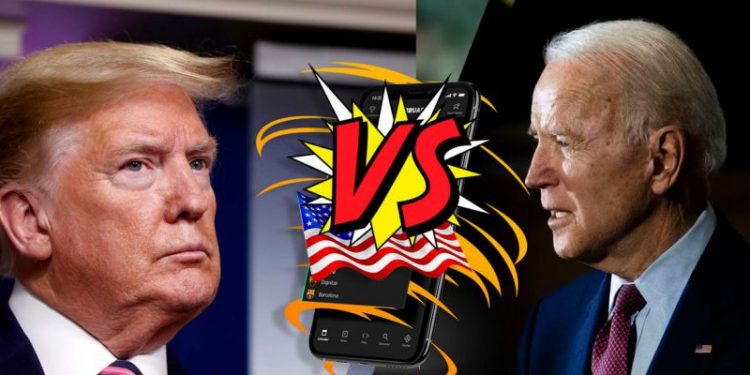 US election predictions emerge every day from both the general public and private pollsters eager to project the results on November 3. Here is all the latest on the presidential race so far.

Donald Trump and Joe Biden have now both secured official nominations to stand for their respective parties following the Republican and Democrat national conventions. Public favour has so far skewed towards Mr Biden as COVID-19 has caused a sharp drop in the incumbent President’s popularity. The polls have, at times, shown a gap of up to 10 points between them, but they remain in flux.

Will Donald Trump or Joe Biden win the US election?

The outcome of this year’s election seems cut and dried so far, as Mr Biden has commanded a consistent majority over his rival.

Aggregators have noted distinct peaks and troughs over the last few months, but the Democrat candidate has remained at least five points ahead.

Last week, Mr Biden commanded a nine-point lead over his rival, who had just a 41 percent chance to remain in the Oval Office.

Now, the lead has collapsed to just 7.3 percent, and the numbers will continue to shift like this until November 3.

Odds have fallen in line with the latest polls, according to analysts with The Pools.

Speaking to Express.co.uk, The Pools spokesman David Prentice said: “Donald Trump has eaten into Joe Biden’s early lead in the US Presidential race, and the POTUS has now nosed ahead of his rival for the first time.

“The polls initially had Biden consistently ahead of Trump, but the most recent odds from thepools.com have seen the President mount a stirring comeback.

“Trump is now 19/20 favourite to win the presidential race, with Biden drifting to 4/5.

“The US Presidential Election Popular Vote winner, however, is cut and dried. Biden is 1/6 and Trump 7/2.”

Who has the highest approval rating?

Analysts provide several different types, as some measure a candidate’s popularity within their own party, and others with the general public.

Here, the lead remains in favour of Mr Biden, but much slimmer compared to overall polls.

Mr Trump currently has an aggregated approval rating of 41.9 percent, with a net loss according to RealClearPolitics.

His disapproval rating sits at 55.6 percent, capturing an over-all picture for the President, who has failed to break the 50 percent mark throughout his first term.

Polls have also shown voters looking unfavourably on Mr Biden, who has an approval rating of 44.5 percent.

He has a disapproval rate of 46.1 percent, showing a much closer competition than other polls suggest.