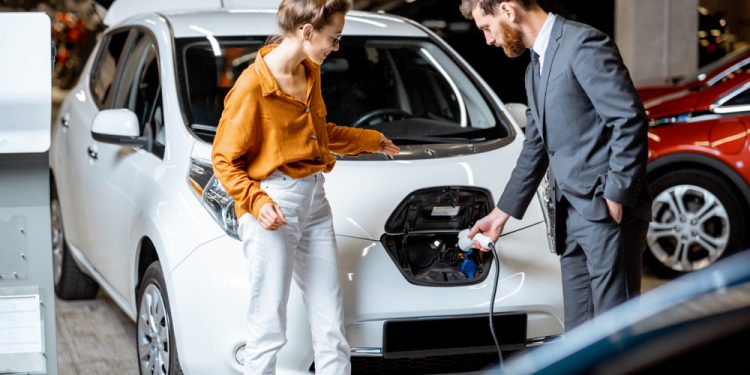 Sales manager showing how to charge electric car to a young client, plugging wire into the car socket at the car dealership

Brussels (Brussels Morning) The sale of all-electric cars in Norway last year overtook sales of internal combustion engine-powered cars and hybrids. According to the most recent data, German manufacturer Volkswagen replaced US-based Tesla as the producer of most battery-powered cars sold in the Scandinavian country, Reuters reported on Tuesday.

Battery-powerd electric vehicles – those without any primary or backup internal combustion power source – made up 54.3% of all new cars sold in Norway during 2020, a significant increase compared to the 42.4% market share they enjoyed in 2019. The Norwegian Road Federation (OFV) noted that, only a decade ago, their market share was a mere 1%.

The Nordic country is set on a path to end the sale of all petrol and diesel cars by 2025, exempting all electric vehicles from the taxes imposed on internal combustion powered cars. Speaking at a news conference, OFV chief executive Oeyvind Thorsen said the country is definitely on track to reach the 2025 goal.

Volkswagen topped the bestseller list in Norway in 2020, with its Audi brand e-tron sports utility and sportsback vehicles. Tesla’s mid-range Model 3, which topped the sales charts in 2019, dropped into second place last year.

According to Christina Bu ,head of the Norwegian interest group EV Association, the group’s preliminary forecasts indicate that all-electric vehicles are set to reach a 65% market share in the current year. “If we manage that, the goal of selling only zero-emission cars in 2025 will be within reach”, Bu said.

Several manufacturers plan to launch a number of new models in the Norwegian market this year. Tesla’s sports utility vehicle, Model Y, aims for the part of the market dominated by Audi past year, as do the all-electric SUVs produced by Ford, BMW and Volkswagen.