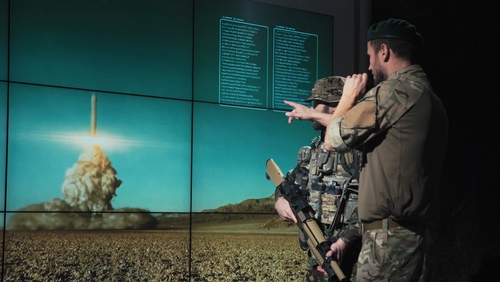 Brussels (Brussels Morning) Concerns about the possibility of remilitarisation in Europe have prompted MEPs to adopt a report calling for the decrease of nuclear weapons in military strategy scenarios and saluting the binding treaties they consider to be key to maintaining peace and stability.

The European Parliament is calling for the reduction and elimination of all nuclear arsenals as a move to create conditions for achieving a world free of nuclear weapons. The report was adopted by 536 votes in favour, with 128 against and 31 abstentions.

From a geopolitical viewpoint, MEPs consider that the ongoing erosion of the global non-proliferation, disarmament and arms control architecture has been worsened by the rapid development of new and potentially destabilising technologies  such as artificial intelligence-enabled weapon systems, hypersonic missiles, and drone technologies.

“While this report voices concern over the ongoing erosion of some key components of this architecture, it is also an expression of the European Parliament’s conviction that the EU can and must play a leading role in weapons of mass destruction disarmament and non-proliferation efforts”, MEP Sven Mikser (S&D) declared.

In the report, which analyses challenges and prospects for multilateral arms control and disarmament regimes for weapons of mass destruction, MEPs express their fears that withdrawal from major arms control treaties, or the lack of such treaties, would seriously damage the international arms control regimes that have provided certain stability for decades.

The Parliament further expressed its full support for the Treaty on the Non-Proliferation of Nuclear Weapons (NPT) as one of the most universally accepted and legally binding instruments.

They call on States Parties to the Treaty to do their utmost to contribute to a successful and ambitious outcome of the upcoming 10th Review Conference on the NPT, concerning disarmament, non-proliferation and the peaceful use of nuclear energy.

“Solid and comprehensive arms control, non-proliferation and disarmament architecture based on binding treaties and reinforced by a reliable and transparent verification mechanism is a key to maintaining peace and stability in the world”, Mikser noted.

Moreover, the report points to the need to ensure the EU plays a strong role in global. rules-based non-proliferation efforts and arms control and disarmament architecture as well as when it comes to preventing the use of any chemical, biological, radiological and nuclear weapon.

Overall, MEPs reaffirmed their full support for the Joint Comprehensive Plan of Action (JCPOA) as a key element of the global nuclear non-proliferation architecture.

The report welcomes the EU’s continued engagement with Iran on issues related to civil nuclear cooperation while it calls on Iran to immediately cease its nuclear activities that violate the JCPOA. This should go hand-in-hand with the lifting of all nuclear-related sanctions, MEPs said.

MEPs regretted the withdrawal from the Intermediate-Range Nuclear Forces Treaty (INF) by the US and the Russian Federation following Russia’s persistent failure to comply with the treaty.

They revealed their particular concern about the possible re-emergence of ground-based intermediate-range missiles in the European theatre of operations, the implications for a new arms race, and the remilitarisation in Europe.

Turning to China, the Parliament indicated its concerns about Beijing’s modernisation and broadening of its nuclear arsenal, including hypersonic nuclear-capable missiles. MEPs called on Beijing to “actively and in good faith” engage in international arms control, disarmament, and non-proliferation negotiations.