Nuclear Disarmament is a precondition for real security in Europe

by Ludo De Brabander
in Opinion 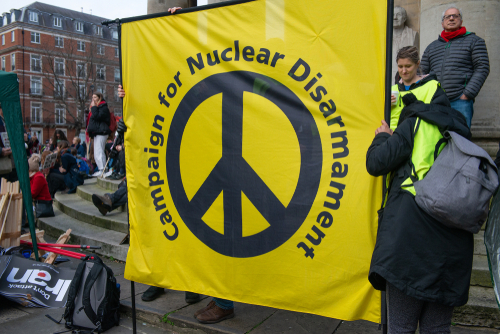 London, UK. 11th January 2020. Anti war protesters with CND banner at the NO WAR WITH IRAN demonstration in Portland Place, London, campaigning for peace and de-escalation in the Middle East.

We can look with optimism or pessimism to the future.

Brussels (Brussels Morning) On the negative side: it appears that we are living in a more dangerous decade compared to even the difficult episodes of the Cold War. For the last two years, the Bulletin of the Atomic Scientists has set the hands of the ‘Doomsday Clock’ that measures the count-down to the likelihood of man-made global catastrophe at one hundred seconds to midnight. It is now closer than it has ever been before, due to the imminent threats of nuclear war and climate disaster. Arms control treaties are no longer upheld, and governments have started updating and expanding nuclear arsenals.

But there are also hopeful developments. On 22 January, the Treaty on the Prohibition of Nuclear Weapons (TPNW) entered into force. It prohibits nations from developing, testing, producing, manufacturing, transferring, possessing, stockpiling, using or threatening to use nuclear weapons, or from allowing nuclear weapons to be stationed on their territory. It also prohibits them from assisting, encouraging or inducing anyone to engage in any of these activities.

Meanwhile 56 states ratified the Ban Treaty. A milestone in history. Four years ago (7 July, 2017), after several years of negotiations, 122 countries voted in favour of the new Ban Treaty, with one against (Netherlands), and 1 official abstention (Singapore). Unfortunately, 69 nations did not vote at all. They didn’t even take part in the negotiations. They included the nuclear weapon states and all NATO members except the Netherlands.

NATO and member state governments claim that the TPNW is incompatible with the Non-Proliferation Treaty (NPT) and that it even undermines it. It is important to recall that a key motivation of the states that negotiated the TPNW was to take forward the implementation of the nuclear disarmament obligations of article VI of the NPT. This intention is also clearly stated in the preamble of the TPNW. Article VI of the NPT legally obliges all states parties to pursue “negotiations” and “effective measures” “on a treaty on general and complete disarmament under strict and effective international control”. That is exactly what the TPNW does. In Geneva in 2018, UN Secretary-General, António Guterres, flatly rejected claims that the TPNW undermines the NPT, declaring the two treaties “fully compatible” and complementary. The research services division of the German federal parliament, wrote in a detailed paper in January 2021: “The TPNW does not undermine the NPT; it is part of a common nuclear disarmament architecture.”

Nevertheless, despite the obligations under article VI of the NPT, most NATO member states as well as all nuclear states, have been boycotting the negotiations. NATO falsely claims that the Ban Treaty undermines the nuclear disarmament regime. The real reason is that NATO sees the treaty as a threat to the organisation’s political unity over its nuclear strategy. According to NATO: “Nuclear weapons are a core component of NATO’s overall capabilities for deterrence and defence, alongside conventional and missile defence forces. NATO is committed to arms control, disarmament and non-proliferation, but as long as nuclear weapons exist, it will remain a nuclear alliance.”

However, NATO only recently defined itself as a nuclear alliance. In its earliest years, nuclear weapons were barely mentioned in the alliance’s strategic concepts. Nuclear arms were considered a responsibility of NATO’s nuclear states. It is only the last decade, that NATO has accepted a strategic concept in which it considers itself a ‘nuclear alliance’.

From the 1960s, the US began to deploy nuclear weapons in other NATO member states, giving them a role in the planning and preparation of nuclear war. In the years that followed, all countries except France became involved in the nuclear deterrent policy, which was increasingly defined as an expression of alliance solidarity. The reason? International support among the public for nuclear disarmament grew. In the 1980s hundreds of thousands demonstrated in European and US cities in opposing new deployments of nuclear arms. The strengthening of humanitarian and anti-nuclear norms during and after the Cold War played a key role in pushing NATO to adapt. This led to the collectivisation of political responsibility for nuclear weapons.

Why? First, the nuclearisation of NATO as an organisational identity allowed pro-nuclear actors to justify costly nuclear modernisation programmes and nuclear deployments as contributions to alliance “solidarity” and “cohesion”. Second, this nuclearisation of NATO undercut the potential for intra-alliance resistance to nuclear arms. Calls for nuclear disarmament could thus be seen as anti-NATO.

Nuclear sharing became a core component of NATO’s strategy. Of the three nuclear powers in NATO (France, the United Kingdom and the United States), only the United States has nuclear arms in other member states: Belgium, Germany, Italy, the Netherlands and Turkey. Previously, US nuclear arms were also in Canada (1950-1984), Greece (until 2001) and the UK (until 1992). This, by the way, shows that it was possible to send nuclear weapons back to the United States without it being considered an act of defiance against ‘NATO obligations’.

Currently, the US has about 100-to-150 tactical B61 gravity bombs deployed in Europe. In the event of war, they have to be mounted (other than in Turkey) into dual capable aircraft (DCA) This can be considered as a transfer of control by non-nuclear states of nuclear arms which would be in breach of the non-proliferation treaty (NPT) of 1970. The NPT prohibits the direct or indirect transfer of control of nuclear weapons to non-nuclear states. But according to the US, the NPT has no validity in a time of war since such an event would mean that it had failed in its intended deterrent purpose of preventing war.

These bombs are to be replaced by new B61-12 bombs between 2022 and 2025. The latter are equipped with an electronic tail unit that can guide them to their targets. They also offer lower yield options. This mixture of target precision and lower yield options places a more useable and versatile device at the disposal of war planners. Precision accuracy enables them to go after targets that previously would have been ruled out because of the risk of too much collateral damage. This is a very dangerous development. The advent of the new B61-12s will increase the danger of a war with nuclear weapons and further erode the concept of ‘deterrence’.

The world is at a crossroads and Europe has to make a strategic choice – whether to remain part of the arms race or to demonstrate global leadership by promoting a peaceful approach towards a common global security.

Growing tensions with Russia increase the risk of a nuclear war, one that no one can win. So nuclear disarmament is much needed to save Europe from a nuclear disaster. We need a clear political commitment and a time schedule. This should start with negotiations between the US/NATO and Russia to dismantle US nuclear bombs and be followed by agreements on nuclear disarmament in France, the UK and at least the European part of Russia. Once nuclear disarmament is reached, Europe can become a nuclear weapon-free zone as is the case with Africa, Latin America, South East Asia, and other regions. At the same time, the door will be open for European countries to fulfil their obligations under the NPT and to sign and ratify the TPNW.

That would be give expression to the democratic will of people in Europe. According to recent surveys in several European countries, a majority of the population in Europe is in favour of a ban on nuclear weapons. It is what 77% of those surveyed in Belgium want, 89% in Spain, 87% in Italy, and 78% in Denmark, the Netherlands, Norway and Sweden. The challenge is to convert that peoples’ support into political pressure and to place nuclear weapons back high up on the political agenda. We must not miss that opportunity because from next year on the new B61-12 bombs will be deployed in Europe.

Next year there will be two key moments for European political leaders for showing commitment to the democratic will for nuclear disarmament. The review conference of the non-proliferation treaty (NPT) will take place in January 2022 in New York, an important moment to put the obligations of that treaty into action. At the end of March there will be the first Meeting of the State Parties (MST) of the TPNW in Vienna. Austria, Ireland and Malta, all EU but not NATO members, have signed the TPNW and will attend the conference. But other European countries can also participate as observers to show their commitment to nuclear disarmament. Sweden and Norway have announced their intention to do so. Norway is the first NATO member to be an observer of the Meeting of State Parties of the TPNW. The question is whether other European NATO countries will follow. Doing so would help break the nuclear consensus within NATO that currently blocks a nuclear weapon free Europe.

To recall the iconic slogan of Greenpeace: “No time to waste!”