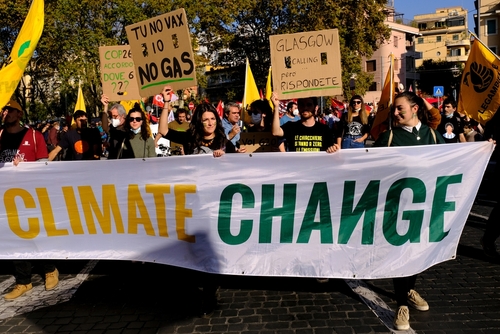 Brussels (Brussels Morning) Beyond the questionable lack of good taste of some scenes of the G20, where the “great” of the Earth seemed, at times, more interested in the tourist and promotional aspect of the meeting, than in the purpose of the Conference, the great absence of this international forum was the depth of the contents.

Certainly, the first act is not comforting: the agreement to stop deforestation by 2030 drips with hypocrisy. How is it possible to identify 2030 as the implementation date, while countries like Brazil, Indonesia, and the Democratic Republic of Congo are devastated by deforestation?

According to the annual report of Global Forest Watch, 12 million hectares of forests were lost in 2018. And an even more alarming fact, which could mark a point of no return, is that the Amazon rainforest, because of uncontrolled deforestation and indiscriminate fires deliberately set to make room for monocultures, has stopped absorbing CO2 and has become an emitter of carbon dioxide.

Deforestation must be stopped immediately, and we cannot salve our consciences by announcing to the world that a trillion trees will be planted by 2030. A project that assumes an average of 343 million trees planted per day for the next eight years serves a purpose without any prospect of realisation.

The only way forward for Europe is to accelerate the ban on imports into the EU of products that cause deforestation, such as soybeans, meat, and biofuels. Of course, this change requires our contribution too since 10% of global deforestation is caused by our consumption patterns and by trade agreements signed by the EU, such as the EU-Mercosur agreement that will increase imports of products that cause deforestation. That is why it is necessary to change many of our production and consumption models, starting from what we bring to our table.

The announcement of the move to stop international support and public funds for oil and gas extraction projects starting from 2023, which Italy managed to sign at the last minute, is certainly an important signal. However, we cannot deny that the Italian decision to join in came practically at the sound of the gong, after a clash between the Ministry of Economy and the Ministry of Ecological Transition, and clearly under pressure from the British.

And beyond this aspect, which is certainly not insignificant, there are other unresolved issues. First, it is not a legally binding commitment, so, other than the declarations, we don’t know if these commitments will be put into effect.

Secondly, India, China, France, and Germany, which are not exactly insignificant states, are missing.

Moreover, the pledge includes an important exception-cum-exemption in qualifying the commitment made by stating that it applies “except in limited and clearly defined circumstances that are consistent with a 1.5°C warming limit and the goals of the Paris Agreement”. What that sentence means is not clear, and it will remain unclear as again there is no governance framework nor concrete rules that apply to those countries that have signed up to this.

This statement – and the reference to the 2030s/2040s created a lot of confusion. Only a few hours after the statement was issued, the Polish PM – one of the signatories – clarified that he had no intention to phase out coal before 2049.

In short, we await the developments of this COP26 in hopes that the commitments will be extended to all participating states and that they will be transformed into binding, measurable and concrete objectives. Science has largely shown the way, all that remains is to pursue it with ambition, ensuring that this long-awaited International Climate Conference will not be remembered as yet another political parade ground where everyone marched around in circles going nowhere..