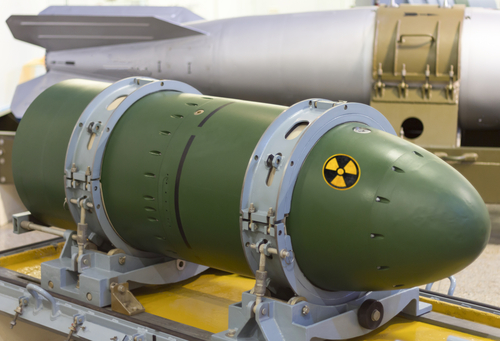 The nuclear warhead on the stand. Weapons of mass destruction. bomb.

According to the findings of the SIPRI Yearbook 2021, published by the Stockholm International Peace Research Institute (SIPRI), the US, Russia, UK, France, China, India, Pakistan, India and North Korea together possessed an estimated 13,080 nuclear weapons at the start of 2021.

While SIPRI notes that this figure represents an overall decrease from the estimated 13,400 nuclear weapons at the start of 2020, it sees no reason to celebrate the statistic. Since the 2020 Yearbook, the number of nuclear weapons currently deployed with operational forces has actually grown over the past 12 months to a total of 3,825 – 105 more deployable active weapons than at the start of 2020.

Out of all deployed weapons, nearly 2,000 were kept in a state of high operational alert, with nearly all of these weapons belonging to either Russia or the US. The vast majority of the annual increase in operational warheads can also be attributed to the two nations, each having added some 50 warheads to their respective operational arsenal.

The two countries continue to possess more than 90% of the global nuclear weapons stockpile. Both continue to run extensive and expensive programmes aimed at replacing and upgrading their warheads, delivery systems and production facilities.

The annual report’s authors warn that the overall number of warheads in global military stockpiles seems to be growing, indicating an end to the disarmament trend that was has been the mark of progress ever since the end of the Cold War. SIPRI also warns that the other nuclear states are also looking to grow and upgrade their arsenals, with all seven either developing, deploying or planning to introduce new weapons systems.