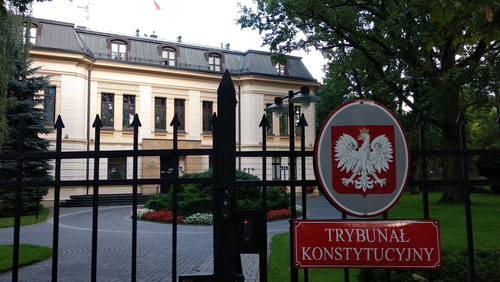 Brussels (Brussels Morning) Poland’s Constitutional Tribunal ruled on Thursday that some Treaties of the EU are unconstitutional.

The Constitutional Tribunal took on the case after Prime Minister Mateusz Morawiecki called on it to verify whether EU bodies could prevent Poland from implementing judicial reforms, Reuters reported.

The Constitutional Tribunal concluded that it has the right to verify the constitutionality of EU rules and the rulings of the Court of Justice of the EU.

The Tribunal opened the case in July, adjourning it four times before yesterday’s prnouncement.

Friction between the European Commission and Poland has been growing over a number of issues of late, including judicial reform and what Polish authorities describe as LGBT ideology.

The ruling challenges the concept of EU integration and deepens the dispute between the Commission and Poland.

The EC accuses the Polish government headed by the Law and Justice (PiS) party of undermining judicial independence as part of its reforms, while the party says the reform is aimed at improving efficiency and eradicating the last vestiges of Communist-era influence.

After the ruling was announced, PiS head Jarosław Kaczyński noted that “in Poland, the highest legal act is the Constitution and all European regulations that are in force in Poland… must comply with the Constitution.”

Critics warn that not only is Poland jeopardising its membership of the EU by challenging the supremacy of the EU rules, but it is also threatening the bloc’s stability.

PiS rejects this view, insisting that it has no plans to leave the EU, while maintaining that it does not have any say when it comes to court rulings.

MEP Jeroen Lenaers was sceptical. “it’s hard to believe the Polish authorities and the PiS party when they claim that they don’t want to put an end to Poland’s membership of the EU.”, he said. According to Lenaers, what the Polish government is doing amounts to “an attack on the EU as a whole.”