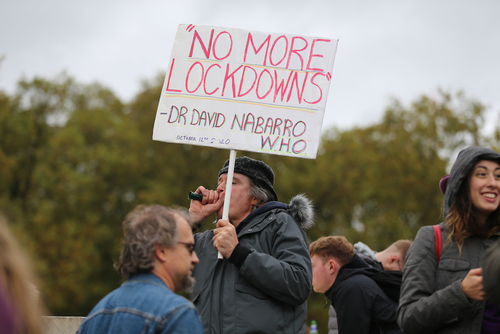 Protesters organised via social media and gathered at the Atomium museum in Brussels. Police noted most arrests were made in and around the city’s rail stations.

In the Austrian capital, Vienna, protesters faced riot police. Austrian authorities had banned a number of protests over the weekend, citing the risk that those participating might not observe the coronavirus restrictions. Authorities had imposed a third lockdown at the end of December, ordering numerous businesses to close.

Hungarians organised protests in Budapest on Sunday as restaurant workers protested against forced closure of their establishments.

Hungarian authorities had ordered high schools, coffee shops and restaurants to close in addition to imposing a night-time curfew.

Protesters pointed out that the restrictions are ruining businesses, with about 100 restaurants having announced plans to reopen despite orders not to.

Romanians protested in Bucharest on Saturday, demanding the resignations of top officials following a fire in the Matei Balş hospital that killed five people on Friday.

The fire caused severe damage to the ground floor of the hospital, forcing at least 100 patients to be evacuated. The Matei Balş is the third hospital in Romania to be hit by a fire in the last three months. Protesters attribute the fires to government corruption and a lack of investments.

In November, a fire killed 10 people in an intensive care unit in the north of the country, while in December one person dies in a fire at a psychiatric hospital in the area.