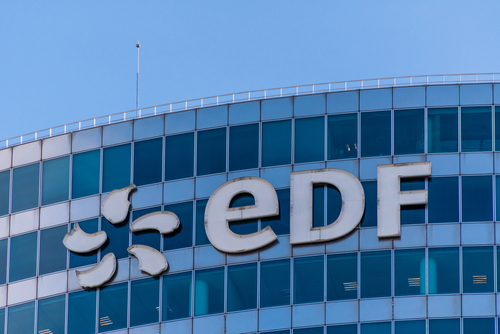 Puteaux, France - November 12, 2020: Logo at the top of the EDF tower in Paris-La Defense. EDF (Electricité de France) is the historical supplier of French electricity

The government sent its offer to buy all remaining shares of EDF to the market regulator as it seeks to take control of energy supplies, according to Reuters reporting.

The government’s offer stands at 12 euro per share, which it announced in the summer, with the offer to be launched on 10 November according to the filing sent to the regulator.

If all minority investors sell their shares to the government, it would set back the state approximately 9.7 billion euro.

The government pointed out in a statement detailing the offer that the “climate emergency and the geopolitical situation require strong decisions to ensure France’s independence and energy sovereignty.”

The move would allow the government to “commit to long-term projects that are sometimes incompatible with the shorter-term expectations of private investors, without being exposed to the volatility of equity markets.”

The state currently owns roughly 84% of EDF and is hoping that full nationalisation will lower the utility’s financing costs, among other.

The power utility is rushing to wrap up maintenance of its nuclear reactors before the start of the heating season after it closed more than 50% of reactors for maintenance, which brought the output of France’s nuclear plants to the lowest point in 30 years.

EDF’s debt has exceeded 40 billion euro, partly due to continued growth of energy prices, and the company is planning to invest approximately 50 billion in construction of new reactors.

According to a source from the Ministry of Economics and Finance, nationalisation would increase EDF’s credit rating as it would show the government’s resolve to support the company. The source added that the government is not planning to up EDF’s capital.

The government hired US financial services company Goldman Sachs and its French counterpart Société Générale to advise it on the nationalisation offer, which is to remain open for 20 trading days after launch.

The process is expected to end on 8 December and the government needs to acquire 90% of the company to delist it from the Paris Bourse.