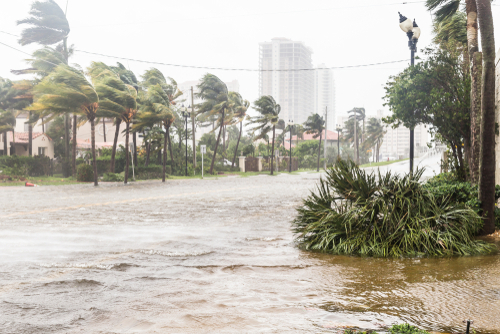 The USA, (Brussels Morning Newspaper) In late September Hurricane Ian lashed the southeastern coast of the United States causing flooding and property damage, displacing tens of thousands and killing dozens of people. No state was hit harder than Florida. This led to the spectacle of Florida’s right wing governor Ron DeSantis requesting help from the federal government as his state tries to recover from the damage. DeSantis is probably best known for his reactionary social policies and cruel stunts like flying migrants, against their will, from Texas to Massachusetts to make some obscure political point. However, he is also a fiscal conservative who disapproves of federal funding for almost anything, and while in Congress in 2013 voted against using federal aid to help the recovery from Hurricane Sandy.

The hypocrisy of DeSantis asking for federal assistance now is hard to miss, but there is another important dynamic here as well. This hurricane, like so many others in recent years, is in part due to climate change. Scientists have been telling us for years that climate change will lead to more extreme and frequent weather events. Hurricane Ian fits very clearly into that category. Unfortunately, that means that despite DeSantis’ proclamation that Ian was “basically a 500 year flood event” we are likely to have more hurricanes like Ian in the coming years.

Hurricane Ian is a reminder that climate change is real and upon us, and that ignoring it and pretending it doesn’t exist, as DeSantis and is party have done for years, will only make the problem worse. However, Ian is also evidence that when it comes to crafting policy that will save the US from the worst effects of climate change and help us transition to an economy and society that is less destructive to the environment, our federalist system is failing.

One of the reasons Hurricane Ian did so much damage is that, despite ample evidence of sea level rise and other developments caused by climate change, the state of Florida continued to facilitate development on the coasts while doing little to prepare for the inevitable climate change related storms. When those storms hit Florida, as with Hurricane Ian, the federal government helped people, but it is very likely that Florida will continue to build on the coasts. The logic of this, from the state’s perspective, is clear. There is no risk involved for the state if the storm recovery is paid for by the federal government. In other words, residents of Florida benefit from low taxes and, in the short term, limited environmental regulations, knowing the costs from storm damage will be paid for by all American taxpayers. Essentially, this incentivizes states to ignore climate change and pass the buck to Washington. As long as some states blithely ignore climate change secure in the knowledge that the federal government will come to the rescue when things get bad, the US will never get ahead of the problem.

Tragically, this is not the worst political scenario with regards to climate change because the Republican Party, of whom DeSantis is one of the most prominent leaders, is committed to the fiction that climate change is not real. Therefore, as we saw during the Trump administration, when Republicans are in power in Washington, they will implement policies that only accelerate climate change.

Federalism exacerbates this problem because even when there is an administration in Washington that recognizes the gravity of climate change and seeks to address it, sub-national governments, which are extremely powerful, can continue to undermine those policies in favor of ones that ensure that climate change has an even swifter, more devastating and costlier impact.

Climate change, like most other problems facing the US, does not respect state lines. Although different states face different climate change problems-fires in the west, hurricanes in the southeast, droughts in other parts of the country-the bigger picture impact of climate change, including the economic impacts will confront the entire country and cannot be solved on a state by state basis, particularly when some of the states engage in a climate change grift-pretending the threat isn’t real, making extremely irresponsible decisions based on climate change denial and then passing the cost on to Washington.

The grift works because Republican governors know that even if the Democrats are in power in Washington, they are still likely to help Republican states, in stark contrast to DeSantis’ 2013 vote against helping victims of a hurricane that hit hardest in New York and New Jersey. This is also a contrast to the Trump administration in the early days of the Covid pandemic when they decided that a quick response was not necessary because the pandemic was primarily effecting states that did not support Trump in 2016. That is a twisted and inhume way to address a deadly pandemic, but it is also consistent with the logic and incentives of the federalist system. American faith in our federalist system is very deep, but climate change shows that faith is misplaced.