Who Are The Main Buyers of Turkish Drones? 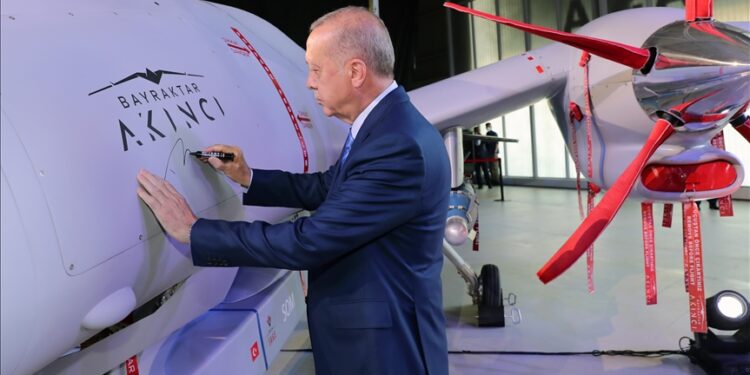 BRUSSELS (Brussels Morning) Azerbaijan and Ukraine are among the countries that are top buyers of Turkish drones. In the early 2000s, Turkey was dependent on Israeli-made drones for military use but Turkey stopped purchasing the drones due to some political reasons.

After being dependent on Israeli-made drones for years, the country decided to design and develop and produce its first indigenous drone with the name Anka drone.

Even after suffering a huge loss in producing their very first indigenous drone, Turkey drone manufacturers did not give up and in slightly over a decade Turkey emerged as the top operator and exporter of the fine drone system.

Is Turkey a drone superpower?

Turkey has emerged as the world’s top three combat drone technology producer and exporter. Turkish drones are being used by many allied countries around the world to fight enemies.

Tayyip Erdogan, Turkish President said, “ With our unmanned combat aerial vehicle Akinci Turkey has become one of the three most advanced countries in the world in this technology”.

He mentioned that the ultimate goal is to develop armed drones that can take off and land on aircraft carriers with short runways for use in missions abroad. The amount of success that Turkey has achieved in unmanned aerial vehicle technology shows its capabilities in the field of the defence industry.

He stressed the point that a lot of countries are in line to purchase the Turkish drones and several export agreements have been made with countries including NATO member Poland.

He further added that Contracts for exports of Turkey’s domestically produced Bayraktar TB2 drones have been signed for more than 10 countries.

He said, “ It is important that our national technologies contribute to the security of allied countries but we make our decision according to our strategic priorities”.

Top Buyers of Turkish drones in the World

Turkish drones are in huge demand after the massive success of its domestic-made TB2 drone. These drones have so many powerful features to accomplish tasks effectively and efficiently by staying in the air for 24 hours.

So many countries around the world are eyeing the Turkish drones to stay ahead in their respective regions and play the role to maintain peace. Among all other countries Azerbaijan, Morocco, Tunisia and Ukraine are the top buyers of Turkish drones in 2021. There are some countries who are looking to make most purchases for Turkish drones in the year 2022 are given below.

Let’s dive into the details of some of the prime buyers of Turkish buyers.

Poland is all set to purchase 24 armed drones from Turkey and this move will make them the first NATO member ever to purchase Turkish-made unmanned aerial vehicles.

He further said “ Bayraktar TB2 drones have proven themselves in wars and added that UAVs would be serviced by the military company” without mentioning the name or giving more details.

Turkish defence technology company Baykar has sold its Bayraktar armed drones to Azerbaijan, Qatar, Ukraine and Libya. The Turkish president even mentioned that Saudi Arabia was also interested in buying them.

Kyrgyzstan announced that they have decided to own Turkish drones to strengthen its defence capabilities. Kamchybek Tashiev, Chairman of the state committee for national security said that they have placed an order to buy a Bayraktar drone.

Tashiev said, “ Currently Turkey is building bayraktar armed drones for us. Only five countries have these. We will be one of those countries. These drones will be in our country soon”.

Ukraine, Qatar, Libya, Morocco, Poland, Tunisia and Azerbaijan are the only countries in the whole who have got their hands on the Turkish made Bayraktar drone and are using it for defence purposes.

Ukraine is one of the countries that have recently shown a lot of interest in purchasing Turkish made drones and even purchased them last December to solidify their defence military moves.

As the Russian forces were creating pressure from all sides on Ukraine, Ukraine used a Turkish military drone known as TB2 to destroy the howitzer used by pro-Russian separatists in the Donbas region.

The Kremlin raises its concerns over Turkey’s bold decision to sell strike drones to Ukraine. The Kremlin believes that Turkish-made drones are destabilising the situation in eastern Ukraine.