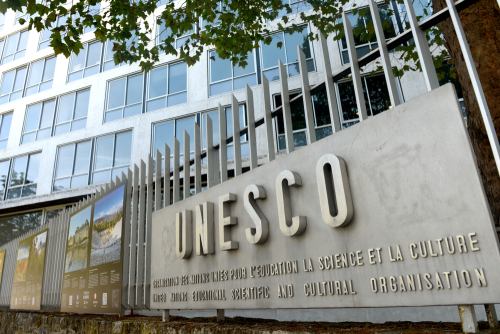 Belgium (Brussels Morning Newspaper) United Nations’ cultural agency warned on Friday that there are tens of churches, museums and other historical sites at risk of destruction due to the ongoing war in Ukraine, with the agency stressing it is particularly worried about the northern Ukrainian city of Chernihiv.

Last month, UNESCO announced it was bolstering its protection of Ukraine’s endangered cultural heritage sites, marking them with the distinctive “Blue Shield” emblem, part of the 1954 Hague Convention for the protection of Cultural Property in the Event of Armed Conflict.

Speaking at a press conference on Friday, UNESCO assistant director for culture, Ernesto Ottone, revealed that more than 50 sites were now totally or partially damaged. According to the agency’s preliminary list, the sites include 29 religious sites, 16 historical buildings, four museums and four monuments.

“We are very concerned about both the situation at the humanitarian and heritage levels,” said Ottone on Friday, warning that “humanity’s heritage is in danger” in Ukraine.

Early this month, UNESCO head Audrey Azoulay sent a formal letter to Russian Foreign Minister Sergey Lavrov, reminding him that Moscow is a signatory of the 1954 Convention. Azoulay later confirmed he received a response, in which Russia stated it was “aware” of its obligations, and that it was “committed” to them.

Ukraine also has a number of cultural sites on the tentative World Heritage list, which includes the Historic Centre of Tchernigov, located in Chernihiv, which dates to the 9th to 13th centuries, and consists of various historical buildings, among them the 11th century Transfiguration Cathedral and the 12th century Borissoglebsky Cathedra.