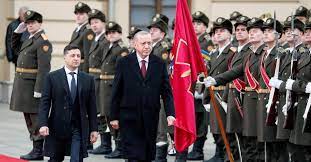 According to Turkish officials, Erdoğan said, given his scheduled meeting with his Ukrainian counterpart Volodymyr Zelensky, he was not picking any sides in the ongoing crisis. Turkey, a NATO member, maintains good relations with both Kiev and Moscow, although Erdoğan previously stated that his country would meet its NATO obligations should Russia invade Ukraine.

Before departing for Ukraine, Erdoğan told the media that Turkey was calling on both sides to seek dialogue, maintaining that the crisis should be resolved peacefully, on the basis of international law.

“God willing, we will successfully overcome this problematic period between these two countries”, he declared. Russian President Vladimir Putin is scheduled to visit Turkey, as soon as he completes his state visit to China. “Without holding these two visits, these talks, it would not be right to think about what we can do”, Erdoğan observed.

While Turkey is a member of NATO, Ankara also keeps close ties with Moscow to the point of angering some of its NATO allies. Erdoğan’s decision to acquire Russian anti-air missile systems despite US objections resulted in the country being booted from the F-35 fifth generation fighter jet programme.

Washington cancelled Turkey’s planned cooperation in the programme in July 2019, a week after the first S-400 anti-air system components arrived in the country, saying that US stealth fighter technology is “not compatible” with Russian missile systems, a euphemism for US concerns that Russia could obtain information about its latest fighter jets through the technology supplied to Turkey.

Despite its cooperation with Moscow, Ankara hasn’t shied away from confronting Russia in the past. Turkey opposed Moscow’s policies in Syria and Libya, and its annexation of the Crimean peninsula from Ukraine in 2014. Erdoğan has also supplied combat drones to Ukraine in the past, ignoring Moscow’s objections.