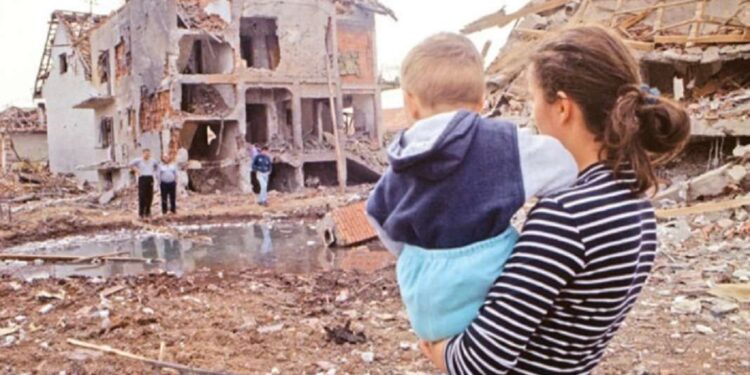 NATO bombing of Serbia in 1999

Belgium, (Brussels Morning Newspaper) Serbia’s President Aleksandar Vucic said his country will not join NATO, recalling the alliance’s aggression against Belgrade in 1999. Vucic’s declarations came yesterday during an election rally in Kikinda, at which he described NATO as “irresponsible, arrogant and presumptuous”.

“I believe that Serbia must not join NATO. Serbia is a free country and a militarily neutral country. Serbia will be defending its land and its sky on its own. But let me tell you something: our duty is to forgive and our duty is not to forget”, Vucic declared, citing the names of infants and children killed in the 1999 bombings.

“I visited that hospital, one year after the bombing in June 2000 and saw with my own eyes how they did it with utmost accuracy. These are war crimes using NATO’s so-called smart bombs”, Michel Chossudovsky wrote in his 2021 book “The US-NATO War of Agression Against Yugoslavia”.

The alliance’s leadership maintained that the primary reason for the operation was the prevention of genocide of Kosovo’s Albanians. According to NATO sources, its aircraft flew 38,000 sorties and carried out 10,000 bombing strikes during the entire operation.

The intervention, however, is claimed to have violated international law. In 1998, during the 1998 Rambouillet talks, the then President Slobodan Milosevic refused the stationing of NATO troops inside Yugoslavia. After the bombings, Milosevic was arrested and taken to The Hague to face war crime charges.

Milosevic was found dead in his prison cell on March 11, 2006, poisoned, according to his lawyer. Ten years later, on March 24, 2016, The Hague ICTY Tribunal exonerated Milosevic, stating that he was innocent of the crimes he was accused of.

“Burgeoning military alliances, with the US at the helm, are now more likely than ever to try to intervene in a similar way against any country that refuses to be a new-world-order colony by allowing its wealth and labour power to be plundered by transnational corporations”, Karen Talbot, wrote a year after the NATO bombings for JSTOR, the digital library.

Last year, the Czech Republic’s President Milos Zeman apologised for the 1999 NATO bombing of the former Yugoslavia, in which, he acknowledged, his country had taken part at a time when he was Prime Minister.

“It was lack of courage”, Zeman said in the course of a visit to Prague. “With this plea for forgiveness, I resolved my long-standing trauma, because remorse is liberating.”

The EU has described Serbia as a “launchpad for Russian disinformation operations in the Western Balkans.” Meanwhile, as reported by Euronews,  Serbian football fans have come up with their own way of drawing attention to US military interventions in the world.

When Serbia’s Crvena Zvezda and Scotland’s Glasgow Rangers met in a Europa League qualifying match on 17 March, Serbian fans raised banners listing various military interventions carried out by the US since the 1950s, under the ironic slogan, “Give Peace A Chance”.