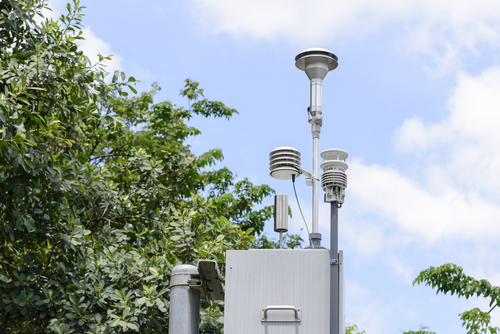 The pollution detector station in the park.

Belgium, (Brussels Morning) The cities of Umeå in Sweden, and Faro and Funchal in Portugal scored the best air quality during 2020 and 2021 out of a total of 340 cities. Cities in Finland and Estonia, Tampere and Narva, respectively, have also featured good quality air, ranking in the top 5.

The conclusion came from an updated assessment by the European Environment Agency (EEA), which ranks cities from the cleanest to the most polluted based on average levels of fine particulate matter (PM2.5). The EEA analysis is based on the latest air pollutant emission inventory data, as reported by EU countries in February 2022.

From 2020 to 2021, air quality was good in only 11 cities, EEA found, meaning that levels of PM2.5 were below the World Health Organization’s (WHO) guidelines. In contrast, the European Union’s annual limit value for PM2.5 of 25 µg/m3 was only exceeded in the three most polluted cities, including Nowy Sacz, Poland, and Cremona and Padova in Italy.

Under the European Green Deal’s Zero Pollution Action Plan, the European Commission set the 2030 goal of reducing the number of premature deaths caused by fine PM2.5 by at least 55% compared with 2005 levels.

“What is urgently needed is full alignment of EU’s legally binding air quality standards with the regularly updated WHO guidelines and the latest science,” said Anne Stauffer, Director for Strategy and Campaigns at the NGO Health and Environment Alliance (HEAL).

EU countries are expected to meet national commitments to reduce emissions for five air pollutants under the National Emission reduction Commitments (NEC) law. As of 2020, the legislation became more ambitious and just under half of member states met all their national emission reduction commitments.

EEA’s report found that the biggest challenge remains reducing emissions of ammonia from agriculture, with 11 EU countries needing to cut their emissions levels. Only 13 of them met their commitments for each of the five main pollutants — nitrogen oxides, non-methane volatile organic compounds, ammonia, sulphur dioxide and PM2.5.

Moreover, 14 EU countries failed to meet their emission reduction commitments for at least one of the five main air pollutants.

“Lowering current EU standards for PM2.5 and NO2 will reduce the adverse effects of ambient air pollution on chronic as well as infectious diseases,” said Professor Dr. Anette Peters during an online event organized by the European Public Health Alliance (EPHA).

As part of its latest assessment of air quality, the EEA also published the annual EU emission inventory report 1990-2020 which looks at air pollutant emissions reported by the EU under the United Nations Economic Commissions for Europe (UNECE) Air Convention.

As part of the European Green Deal, the EU is currently reviewing its Ambient Air Quality Directives.  With growing scientific evidence of the consequences of air pollution on health, NGOs are urging the EU to align its legally binding air pollutants limits with the WHO Global Air Quality Guidelines, which are much stricter than the standards set by the EU.