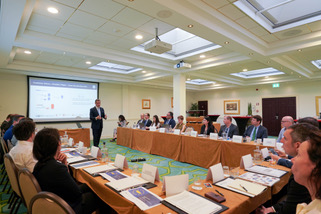 Belgium, (Brussels Morning) Business cooperation between Turkey and the EU is being discussed to modernize Turkey-EU Customs.

A joint position paper assessing the benefits and impact of revamped Customs between the two blocs was presented today by the Presidents of the Bilateral European Chambers of Commerce and Industry in Turkey during an official event in Brussels.

The occasion happened under the umbrella of the Sustainable Value Hub, founded by Ipek Tekdemir, who is currently advising EU stakeholders on matters related to trade affairs between the EU and Turkey.

One of the key takeaways is for the EU to take into account the digital economy and the European Green Deal when modernizing the existing customs agreement.

The delegation is set to meet with high-level EU officials, between 5-7 September, under the format of one-to-one meetings at the European Commission and European Parliament premises.

“All institutions here work on the same objective, which is to strengthen the diplomatic relations between Turkey and the EU. We work together to stimulate trade and to facilitate networking. We hope that this visit will create a solid basis for future dialogue,” said Veronique van Haaften, Secretary of the Bilateral European Chambers of Commerce and Industry in Turkey.

Over the past years, Turkey has been calling on the EU to revitalize its accession process, in addition to updating the EU-Turkey Customs Union, maintain regular high-level dialogues, visa liberalization and cooperation on counterterrorism.

Recently, Turkey and the EU have both agreed that their Customs Union, which has played a concrete role in enhancing their relations since 31 December 1995, requires a comprehensive modernization.

The ultimate goal of today’s visit is to underline the economic advantages of further cooperation between Turkey and the EU. In the wake of global events, there are enormous challenges for the European business sector. The immediate economic ramifications of the war in Ukraine, the recovery from the shutdowns stemming from the COVID-19 pandemic and the continued geopolitical and competitive threats from China.

“Geostrategic needs show us that the value chain built around Asian countries, be it China or Vietnam, needs to be taken closer to Europe,” said Dr Markus Slevogt, President of the German-Turkish Chamber of industry and Commerce (AHK Turkey).

Along with having systemic and structural problems, the EU- Turkey Customs Union agreement does not cover booming sectors such as services and e-commerce.

“We didn’t even have the internet when the Customs Union was implemented, now there’s e-commerce, customs, agriculture,” stressed Slevogt noting the “engine” is no longer up to speed for the current trade levels between Turkey and the EU.

For example, General Data Protection Regulation (GDPR), digital trade, and Green Deal are not part of the Customs Union upgrade agenda, developments that the delegation says should be taken into consideration.

“[We should look] not only at digitalisation, but also consider CO2 taxation — the private sector is pushing very hard for this. Turkey is ready to step up to the standards of the investors. With the collaboration of the EU, I think Turkey can overcome all these challenges,” said Nevzat Seremet, president of the Belgian/Luxembourg Chamber of Commerce in Istanbul.

Last year, the European Parliament’s Committee on International Trade (INTA) rejected the idea of replacing the Customs Union between the EU and Turkey with a free trade agreement (FTA) like those in place with the UK, Japan or Canada.

MEPs agreed that modernised Customs is the way ahead and rejected a FTA saying that abandoning the Customs Union would mean giving up the accession process and that would create political problems between the two blocs.

Turkey is among the European bloc’s top 10 markets both for exports and imports. EU exports to Turkey rose 23% annually to 39 billion euros in the first half of 2021. Moreover, Turkey’s exports to the European single market jumped 28.5% to 37 billion euros, narrowing the trade balance gap 900 million euros year on year.

According to a study commissioned by the INTA Committee, bilateral trade in goods between Turkey and the EU was worth 132.5 billion euros in 2020. Around 40% of all Turkish export in goods are sold to EU countries, while imports from the EU countries represent 33% of all Turkish imports.

Over the last decades, the EU is also by far the biggest source of foreign direct investment in Turkey. On the other hand, Turkey is the EU’s 6th biggest trade partner, representing 3.6% of the EU’s total trade in goods with the world in 2020.