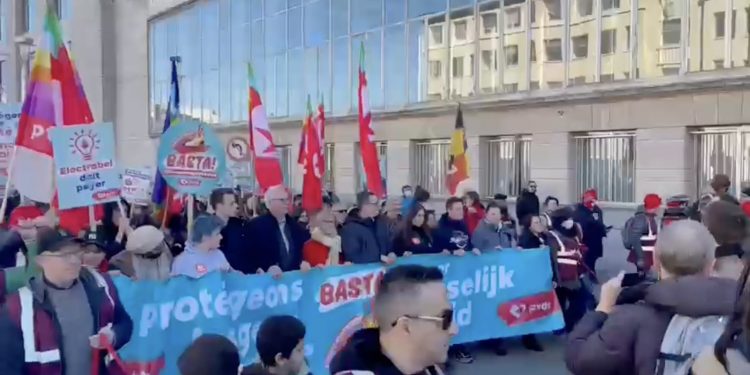 BRUSSELS (Brussels Morning) – The PVDA protested in Brussels on Sunday against the exponentially rising energy prices. Under the slogan ‘Basta! time for a humane policy’, six thousand demonstrators marched through Brussels, along the Mont des Arts.

The PVDA demands an urgent reduction of the VAT on energy to 6%. A cost that can be paid by skimming the profits of energy suppliers such as Electrabel, the party said in January.

They travel through Brussels with that requirement. According to Ilse Van de Keere, spokeswoman for the Brussels-Capital-Ixelles police zone, there are about six thousand demonstrators.

“Energy prices are exploding, people can’t do anymore. The government’s lack of decisiveness in the midst of an unprecedented energy crisis is appalling. We demand actions, not words. Structural, not temporarily. Get rid of sky-high energy bills,” said PVDA chairman Raoul Hedebouw about this in January.

The far-left PVDA organised a march through Brussels yesterday to protest against high energy prices, but also against general policy. There were thousands of people on their feet in the capital.

A young woman explained why she was joining the march: “Wages, pensions… I really don’t see a future for myself anymore. And that’s not my own fault. That’s why I think we should all send the signal together that it’s been enough.”

For another participant, the high energy bills are an important motivation to be a part of the demonstration. “A VAT of 21 percent on electricity and gas, that’s ridiculous. That’s for luxury products such as caviar and champagne or Jaguars, but not for gas and electricity. Those are basic necessities.”

Organiser PVDA therefore repeated its old demand to immediately bring the VAT on gas and electricity to 6 percent. That measure is now also back on the table with the federal government, but PVDA believed it was important to put extra pressure on the protest.

“People really need a lot more help from the state. It’s just too little,” says PVDA chairman Raoul Hedebouw. “I think it is only logical that people are furious. It is about two to three thousand euros more per year, how can you afford that? And it will increase even more in the months to come. So they must  come up with a solution.”

PVDA has been discredited in recent days. The party abstained when a resolution was voted in the Flemish Parliament to condemn the Russian invasion of Ukraine. That caused a lot of outrage. But the party strongly condemns the Russian invasion, says Hedebouw.

“We have clearly condemned that, because Putin is an autocrat of the oligarchs who simply does not recognise the Ukrainian state. But at the same time we have said that we must put peace on the table, because war rhetoric is just going to get us a war all over Europe. So Yesterday we argued with the peace movement to say: give peace a chance,” said the chairman.