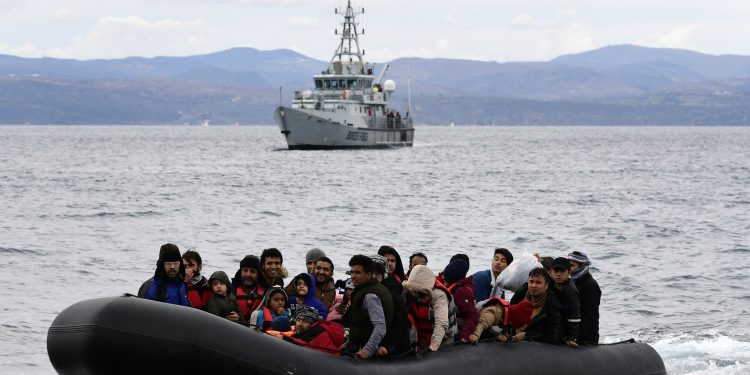 London (Brussels Morning) A joint investigation has revealed Frontex, the EU’s border and coast guard agency, has been complicit in “pushbacks” in the Aegean sea to drive away people on rubber dinghies seeking refuge on Greek soil.

Pushbacks, which are illegal under international law, occur when boats are blocked from docking on Greek soil by the Hellenic Coast Guard (HCG) until it runs out of fuel or disabling its engine. It is then pushed into Turkish waters using waves or by towing the boat.

In some cases, when the boats reach Greek soil, passengers are detained and abandoned on a life raft in the middle of the sea. Such pushbacks can result in a standoff between Greece and Turkey’s coast guards, with neither wanting to accept the stranded boat. It can result in high-speed maneuvering causing further danger to those on board the raft.

On being presented with evidence, the Greek maritime ministry denied its coast guard’s involvement in pushbacks.

This is the first time Frontex has been found to be involved in a pushback.

The principle of nonrefoulement means refugees and asylum seekers cannot be returned to an unsafe situation.

Spotting an overcrowded boat in danger compels Frontex to rescue its occupants.

Frontex has claimed it has observed only one pushback incident, but the investigation reveals a contradictory situation, even without the full data from Frontex’s vessels’ transponder information, so it provides only a snapshot.

Frontex is an EU agency that coordinates border control between EU member states and other Schengen countries.

With headquarters in Warsaw, Poland, its Operation Triton controversially replaced the Italian-run Operation Mare Nostrum, a search and rescue mission in the Mediterranean.

The investigation used open-source data to identify and record pushbacks by establishing where Frontex vessels were being used, by gaging what assets were deployed in Operation Poseidon and if they had participated in pushback operations.

The data included social media posts, videos, tracking sites and Frontex’s own information as well as questions asked in the European Parliament.

AIS and transponder data were also used to detect whether these vessels were involved in the information using sites like Marine Traffic or Flight Radar 24.

While the availability of transponder data was spotty, some was accessible and additional data was purchased from other tracking companies on dates pushbacks were reported.

This dataset was crosschecked with investigators’ own databases of incidents collected from public reports and NGOs, which included coordinates often provided by occupants of the dinghies. These revealed several pushback incidents with Frontex assets close.

Six incidents were identified through the investigation from March, involving Frontex assets directly or with them in the vicinity.

Four of them were noted as “proximity incidents”, with Frontex assets within five kilometers of the incident, while two were confirmed as being present at the pushbacks themselves.

Where these proximity incidents are concerned, it’s difficult to know what knowledge Frontex had of them exactly, but Bellingcat notes, for instance, that Operation Poseidon’s remit is surveillance with a number of tools at its disposal to observe the surrounding environment.

One Portuguese vessel and one of Frontex’s assets, Molivas, has a FLIR camera with x36 magnification capability.

While the small migrant carrying boats might not be visible on a radar, the other vessels involved in the pushback would be visible, as would the wave-generating maneuvers of these vessels blocking the dinghy.

The incidents where Frontex vessels were thought to be directly involved took place on 8 June and 15 August.

Using a range of information such as photos from social media and videos from NGOs a picture was pieced together showing Frontex blocking a dinghy and circling to make wave-like motions to push the dinghy back.

There are possible other incidents not able to be captured through the available data.

Frontex denied any involvement in the pushbacks, stating “Our operational officers are bound by the code of conduct that Frontex developed after consultation with our consultative forum. This code of conduct includes a paragraph specifically related to the prevention of refoulement and the upholding of human rights, all in line with the European charter of fundamental rights”.

It continued that the host state “has the final say in how the operations on its territory or in its search and rescue zone are conducted”.

It also said the agency’s executive director notified the Hellenic coastguard of all reported incidents and the Greek authorities had confirmed an internal inquiry had been launched.

They also noted the thousands of rescues the coastguard has carried out.

Journalist Apostolis Fotiadis responded to the investigation calling it, “More evidence of Frontex aiding and abetting push backs at the external borders of Europe. For years the EC and Frontex have avoided accountability saying it’s not their responsibility to investigate. How is the EC going to investigate now the complicity of its own agency?

“The agency’s internal monitoring system is not fit to deliver and its leadership is unwilling to react. Therefore not only the scope of the proposed independent national monitoring mechanisms within the EC’s new Pact for migration should be broadened to allow for a robust and collective framework able to address violations at the external borders. But also a discussion about transferring the management of Frontex’s monitoring system, including experts monitoring forced return flights, to an independent authority should begin”.