The human rights rollercoaster of the German Presidency 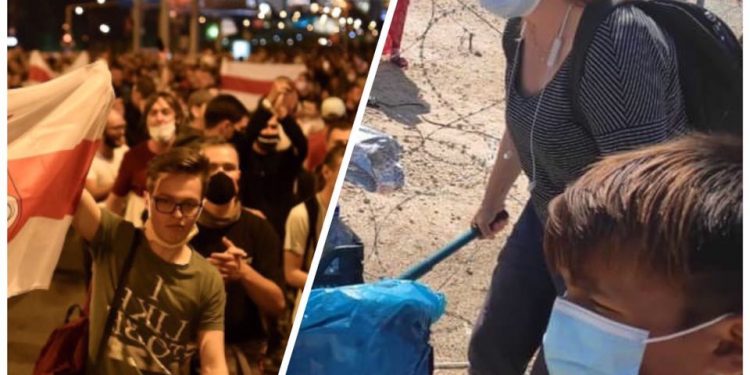 After years of trying, the European Commission has yet again failed to effectively address the overwhelming issue of the migration crisis. Clearly, the German Presidency’s ambitious hopes to resolve the challenge did not win over the faint of heart. The same could be said of the attempt to wrestle control of the COVID-19 upsurge, the looming crisis between Turkey and its Eastern Mediterranean neighbours and others over claims to disputed waters, and the ongoing political crisis in Belarus.

Brussels Morning talks to the Vice President of the European Parliament, Dimitris Papadimoulis, a veteran of the left in Brussels (GUE/NGL) and a Vice President of the European Parliament. He was in Brussels throughout the first Syrian refugee crisis, which coincided with the sovereign debt crisis. He remains in Brussels while the East Med crisis unfolds, witness to yet another refugee crisis and to Europe’s biggest economic crisis in decades.

We talk of a humanitarian crisis.

From Calais’ “Jungle” to the fires of Moria, is managing a migrant camp merely a matter of competence or is their very existence testament to a failure to manage migration flows? If the latter, is there an alternative?

We have to face up to the fact that they stem from our policy choices on the ground. Our legislation, the way we implement it or fail to do so, has actual consequences: for the people seeking protection, for the local communities and for the member states, especially those at the frontline. We cannot turn a blind eye on this if we want to address the shortcomings and the violations of human rights that are taking place.

What is needed is simple: an asylum and migration policy anchored in compliance with international law standards and requirements, in line with our values and the obligation to respect fundamental rights, that includes the right to seek asylum as stipulated by the Treaties. A common asylum system for all member states, respected by all of them, with real solidarity and fairness at its core. Now, as the Commission presents a new pact, is the best moment for all stakeholders to realise that Europe should not put in place policies that “shield” us from those in need. Instead, what we need is a humane and fair system that addresses migration, provides for proper integration, looks at the reasons people flee their homes, and sets up a proper reception system.

BM. What would be your one choice in empowering EU citizenship? Is it simply open discussion and debate? Should people go to the polls to vote for their MEPs or is there an opportunity for wider engagement?

DP. EU citizenship is part of a wider debate on deepening and strengthening the EU. The current global and regional crises clearly show that we have to work harder on common European solutions, which should touch horizontally as much as possible aspects of economic and social life. The pandemic, the continuous financial crises, regional and social inequalities, all have underlined the need for European solutions and policies, a need for inclusive growth, sustainable development, environmental protection and the protection of fundamental human rights.

In the same vein, I support the idea of international lists for European elections and a common EU citizenship. This should be the result of an inclusive process, a constructive and open dialogue with European citizens and not just a top-to-bottom decision. The forthcoming conference for the Future of Europe could be a first step, setting a framework for the debate on these important issues. I consider this dialogue rather urgent, given the rise of euro-sceptic and ultra-right and nationalistic forces in Europe. Enforcing integration for a social and just Europe is the only solution to fight these extreme and dangerous forces.

BM. As a civic movement raises its voice in Belarus, there is speculation about Russian annexation. Can Europe afford to appease Putin’s Russia? Is there any other option?

DP. It is undeniable that Belarus faces enormous challenges regarding human and civil rights. A big part of the Belarussian society expresses its dissatisfaction and asks for political change and new elections. We have to listen to them and to promote a political open and inclusive dialogue in Belarus, which will lead to consensus and political normality and respect of democratic values. The European Parliament could play a positive role in this process.

Indeed, there is speculation regarding a possible Belarus annexation, as well as comparisons with Ukraine. I don’t care to engage with these scenarios. I prefer to focus on constructive ways ahead, which means full use of the EU instruments and promotion of political dialogue in the country.

BM. There seems to be renewed symbolic hostility towards Christianity and Europe emerging in Turkey. Do you see a way back into treating World Heritage Monuments as part of a common European narrative, particularly in a Metropolis such as Istanbul?

DP. It is worrying that Turkey’s President initiated a process that converted Aghia Sophia from a UNESCO World Heritage monument to a mosque. It is a provocation for millions of Christians around the world and a threatening message to the ethnic and religious minorities in Turkey. It is also a message to the international community that Turkey is willing to act unilaterally, regardless of the reactions.

I have tabled a question to the European Commission on Aghia Sophia’s conversion and initiated debates on Turkey’s aggressive stance in the European Parliament in July and September. Let me underline the importance of the recent Parliament’s resolution on Turkey and the Eastern Mediterranean, which was passed with an overwhelming majority. The resolution clearly condemns Turkey’s unilateral and illegal actions against EU member-states, mainly Greece and Cyprus, jeopardizing as they do peace and stability in the region.

We have to pay particular attention to the violent hate-speech articulated by senior Turkish officials, including the President, against the West. This poisons Turkish public opinion and progressively creates a rift with Europe. In the long-run, this could prove detrimental to Turkey’s integration process and suggests that Ankara, at this stage, prioritises its pursuit of a leading role in the Islamic world, the Middle East and the Eastern Mediterranean. It remains to be seen, whether Turkey is willing to hold on to the EU integration process, avoiding international law violations in disregard of European values.