The UK government long ago gave racism the green card 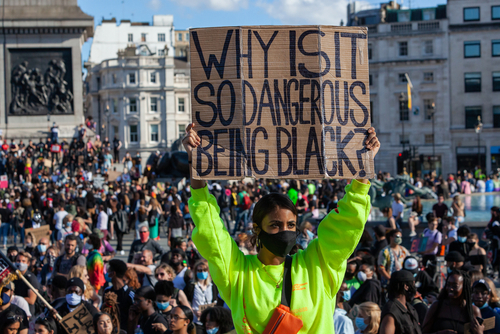 London (Brussels Morning) Whatever side you may have been on during the England v Italy Euro final, few would reasonably support the torrent of online racial abuse that followed England’s loss after three of its players failed to score in the deciding penalty shoot-out.

Those players were 23-year-old Marcus Rashford, 21-year-old, Jaden Sancho and 19-year-old Bukayo Saka — Black players, two of whom were brought on 90 seconds before the end of extra time, scapegoated for the heartbreaking defeat. In addition, caution filled social feeds, warning black and other people of colour, out and about watching the match in groups, to be safe for fear of racially motivated backlash.

Outcry and condemnation of the said abuse came from all aspects of public life and from high up as No. 10 and the Home Secretary.

“This England team deserve to be lauded as heroes, not racially abused on social media. Those responsible for this appalling abuse should be ashamed of themselves”, wrote UK Prime Minister Boris Johnson on Twitter.

Secretary of state for Home Affairs Priti Patel tweeted, “I am disgusted that @England players who have given so much for our country this summer have been subject to vile racist abuse on social media. It has no place in our country and I back the police to hold those responsible accountable”.

“You don’t get to stoke the fire at the beginning of the tournament by labelling our anti-racism message as ‘Gesture Politics’ & then pretend to be disgusted when the very thing we’re campaigning against, happens”.

What Mings was referring to was the act of ‘taking the knee’ that players performed at the beginning of tournament matches. Taking the knee was started by American football player Colin Kaepernick who knelt during the US national anthem in 2016, because he did not want to stand for the flag of a country he said continues to oppress black people.

The act is now a protest movement that has grown popular in sport, particularly after the rejuvenation of Black Lives Matter protests following the murder of George Floyd last year. The England team wanted to use their platform to demonstrate their commitment to anti-racism during the high-profile matches. Unfortunately, not everyone appreciated the symbolism, reflective of BLM’s lack of popularity among much of the British population and the team was subsequently booed.

Rather than support the team, a multi-ethnic squad more diverse than the English population as a whole, Patel said if fans wanted to boo, it was their choice and that she did not support “people participating in that type of gesture politics”.

Johnson’s spokesperson said at the time he respected “the right of those who choose to peacefully protest” but “on taking the knee, specifically, the prime minister is more focused on action rather than gestures. We have taken action with things like the Commission on Racial and Ethnic Disparities and that’s what he’s focused on delivering.”

Now, after accusations his government had given racism the “green card”, the PM has announced he would be taking practical steps to address racism, including fines on social media companies for failure to remove racist content and bans on football attendance for individual offenders.

It would be done by amending existing football banning orders that can be active for up to 10 years, usually invoked for throwing objects onto a pitch at a live game or singing racist chants.

Leader of the opposition Keir Starmer called out the moves as hypocrisy, noting the PM did not condemn the booing of people who choose to stand up against racism, which others have called “dog-whistling” to racists.

But racial prejudice doesn’t purely exist in the hearts of die-hard football fans. It permeates society and the impact is significant as seen by the inequalities between ethnic groups with black people overly represented in unemployment figures and with a higher propensity to live in overcrowded housing. Black people are also more likely to be subject to police’ stop and search’ protocols.

To strive for a post-racist society today, one can’t only be not racist, but must be anti-racist and proactively challenge overt racism and micro-aggressions.

Not much needs to be said of the Prime Minister’s own track record and use of racist language; his use of descriptors like “picaninnies” and “watermelon smiles” are well-cited, but what you shouldn’t miss is that, as a party, the Conservatives are turning a blind eye to racism.

Numerous reports have highlighted the existence and impact of racial inequality in Britain. A recent publication by the Runnymede Trust concluded racism was ‘systemic’ in Britain, but reform is still wanting.

Police reforms, targeted educational opportunities and the advocating of conscious bias training are some of the areas that the government should be looking at. Instead, it spends its time on a review lauding itself as a leader on race relations and dismissing critical race theory while calling for its teachings to be banned at schools when it could be a genuine chance to tackle early attitudes towards race and ethnicity.

Social media companies do indeed need to do more on tackling racial abuse on their platforms and online abuse is not necessarily less harmful than when it occurs offline, but Johnson’s new proposals are too little too late, themselves ‘gestures’ in response to the public mood. The truth is this government gave racism the green card a long time ago.