“But a thorn was left in our tongue …”

by Aziz Isa Elkun
in Culture and Society 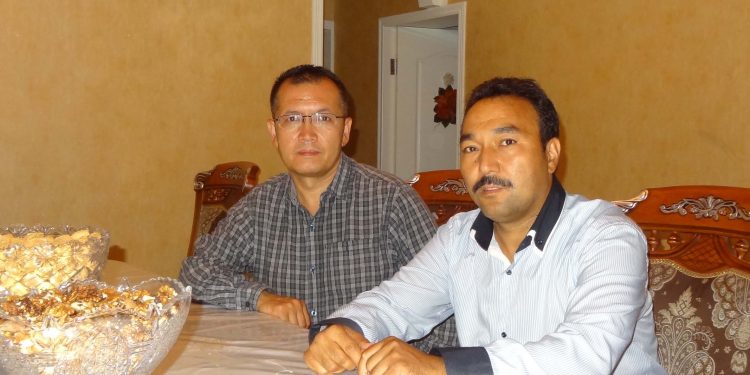 London (Brussels Morning) The Uyghurs love poetry, which is very special to them. It is an essential part of Uyghur cultural heritage and expression, and plays an important role in the continuation of creativity and developing the Uyghur language and literature.

The poet Adil Tunyaz shocked the Uyghur world with his poem, written in 1992, “Qeshqerdiki yershari” (The earth of the city of Kashgar). It was read by many Uyghurs, and he became one of our most celebrated poets, with a special place in the hearts of the Uyghurs.

The stars are soaring at dawn,

The seasons are flying in the trees,

The city is soaring in legends.

Soar in our hearts.

He was born in 1970 into a teacher’s family in Qaghiliq County of Kashgar Prefecture.  After graduating from the Literature Faculty of Xinjiang University in 1993, he worked as a reporter for the Xinjiang People’s Radio Station in Urumchi.

I first met Adil in September 1989 when both of us were studying at Xinjiang University. I studied Russian at the Foreign Languages Department, and Adil studied Literature at the Literature department. These two departments were located inside a two-storey Soviet-style building; we called it “seriq bina” (the yellow building) because its walls were painted yellow. In those years, our student lives were full of turmoil; we had experienced a series of demonstrations and protests in the fast-changing political landscape of China before the Tiananmen Student movement was brutally oppressed.

Though we were university students, our daily life was regimented; we had two compulsory evening self-study sessions after dinner.  Adil was interested in learning the Russian language, and sometimes he came to our classroom to learn. Sometimes I attended the seminars organised by the Literature department. He was already known amongst our year group as a poet.

Many years later, in August 2010, I met him for the second time when I visited Urumchi, obtaining his contact details from another university friend. At the time when many of his poetry books were published, including the famous “Qeshqerdiki yershari” (The earth of the city of Kashgar), I was in London and busy studying English. Still, I could read some of his poems from time to time via the internet.

Today, I found two of his poetry books on my bookshelves. I opened their pages, and saw that in both of the books, he had signed his name with a short message for me: “presented to my penfriend Aziz Isa. From Adil Tunyaz. 27th August 2012, Urumchi”.  On that day, we first arranged to meet at the Youth Park on Yan’an Road. At the park, finally, I met him with my family, including my two young daughters. Of course, our language was Uyghur, but my youngest daughter replied to his questions in English. We had a short but enjoyable time together. That evening, I visited his house, accepting his invitation. We had a brief chat while drinking tea.

Almost a week after that, a few of my friends invited me to have lunch in a Uyghur restaurant in Itipaq Road, in Urumchi. Adil was at that gathering, and soon after, as we were getting ready to depart, we  shook hands to say goodbye. He then handed me a piece of paper and said “this a poem for you and your London-born daughters…”.  We tried to talk a bit longer but “but a thorn was stuck in our tongues” to use an expression, as so many eyes were watching around us. I have not seen him since then, but I hope it will not be our last meeting.

I was also severely affected by the Uyghur genocide of the last three years, losing contact with family member and friends. But I didn’t forget friends like Adil and many others. I did not write or say anything about them, because I wished peace for them. But, unfortunately, this wish and silence didn’t work, it didn’t bring any respite for them. Instead, I heard that he was arrested and his family torn apart.

Finally, after attending the London Uyghur Tribunal last week, listening to camp survivors’ horrific reports of trauma from inside the Chinese concentration camps, I increasingly worried about Adil Tunyaz and his wife Nezire Muhammad Salih. I thought of all my arrested friends in Urumchi and other cities and towns in the Uyghur homeland. The situation of the Uyghurs is so tragic; it affects all of our lives, wherever we now live.

I found Adil’s poetry books and the poem he wrote for my daughters and me, and some photos that were taken when I visited him in 2012.

First on the phone –

Then as fast as before dusk falls

A red taxi parked next to us

Left no trace of misery,

But a thorn was left in our tongue.

Your blessing belongs in a foreign language

Your two daughters as white as snow

And they have no worries

They flew with the English language for a while

With their semi-transparent wings.

In to the Uyghur language –

That language that God blessed

There is a sky underneath, and its top is covered tight

It means forever, and the letters can reach.

The silence is going fast.

Faster than a sword

I pulled back my tongue with shock

Try to avoid even talking about the pigeon

The notebook erased itself in white

But my pen is louder than a bow’s string …

If a lamb was born in a stable

Grass starts to grow in the stream

My fourth son was born, and he will be coming out

To the streets where the moon and stars come out …

A stalk of black grapes

They are hanging over the white paper,

Oh readers, the night is just one page.

He also published an anthology of articles: “Nights in the land of the Prophet” (Peyghembir diyaridiki kéchiler)

According to the RFA Uyghur Service  and United States Commission on International Religious Freedom, “Adil Tuniyaz and his wife, Nezire Muhammad Salih, were both arrested in December 2017. Their eldest son, Imran (19 years old), was also arrested at a Beijing school where he was studying Arabic. Imran was reportedly sent to a detention facility in Xinjiang. It is believed that their three younger children have been placed in state-run orphanages for Uyghur youth whose guardians have been detained. Adil’s father-in-law, the well-known Uyghur scholar Muhammad Salih Hajim, died in a re-education camp in Urumchi in January 2018.”

Under the brutal apartheid policies pursued by Xi Jinping since 2016, well over a million Uyghurs are suffering inhuman treatment in the internment camps within the Uyghur region.

China is mass arresting innocent Uyghurs and deliberately targeting Uyghur intellectuals, including academics, writers, poets, artists and teachers. China claimed these internment camps’ purpose is to “re-educate Uyghurs” or for “vocational training”, but these intellectuals do not need re-educating or vocational training. They are all professionals and many used to work in the Chinese government. The targeting of Uyghur intellectuals reveals that China aims to destroy the Uyghur ethnic group and force the Uyghur to be assimilated into the Han Chinese.

Today, there are an estimated 500 Uyghur intellectuals arrested or kept in Chinese internment camps, and Adil Tunayz and Nezire Muhammad Salih are among them.

Western democracies and international institutions including the U.N. must protect these innocent people’s rights to live freely in this world. China must be held accountable for its atrocities, that constitute crimes against humanity. While I am writing these lines, I heard the Czech Senate has declared that China is perpetrating genocide against the Uyghurs ahead of the key vote in the Belgian Parliament. I hope that many European countries will join this condemnation sooner rather than later.  Keeping the promise of “never again” and protecting lives from genocide is the responsibility of all of us.