Project Palace: The Vision A Hundred Years On 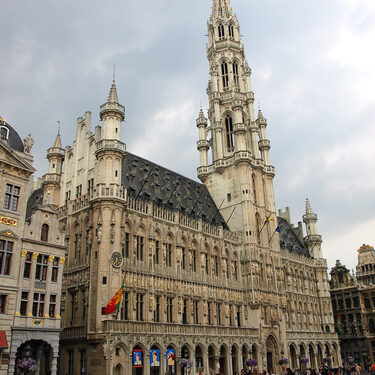 BRUSSELS BELGIUM - JULY 5: Town Hall in the Grand Place on July 5, 2009 in Brussels, Belgium. The Town Hall was completed in 1420 and is a popular tourist attraction.

Belgium, (Brussels Morning Newspaper) The horrors of the First World War are finally fading in the past. A country looks forward to the reconstruction of its social, economic and cultural life. On the 4th of April 1922, the statutes of an association are signed at the Brussels city hall. The first article of such status defines the ambition of the new art institution: “To build and manage a building that is mainly devoted to artistic exhibitions, musical performances, and literary or artistic displays or gatherings.” The mayor of Brussels, Adolphe Max, ratifies the legal basis for the creation of a cultural association with big dreams and expectations: the Centre for Fine Arts or Palais des Beaux-Arts/Paleis voor Schone Kunsten.

Max had an unbreakable commitment to his country and the city. During the years of the German occupation (1914 – 1918), he refused to obey any orders from the enemy and was thus held in captivity first in Namur (Belgium), then in Glatz (Poland) and later in Goslar (Germany). Upon his return, he was welcomed as a hero and remained the mayor of Brussels until his death in 1939. The actions he oversaw on that April spring day in 1922 laid the basis for a cultural institution that a hundred years later continues to offer a space for art to deliver its ultimate goal: invite the audience to reflect on every aspect of life.

The Centre for Fine Arts in Brussels, whose building was designed by world-renowned architect Victor Horta, officially opened its doors six years later, on the 4th of May 1928. According to professor Wouter Davidts, during the opening speech of Adolphe Max, he recounted how King Albert I of Belgium and his wife had briefed him years earlier, during a specific audience they’d had in 1913. Queen Elisabeth had expressed a profound wish for “the foundation of a Centre for Fine Arts that would serve as a temple dedicated to Music and the Visual Arts and where the various artistic expressions of our national life would be able to blossom in a suitable setting.” Albert I had instructed Max to “carry out this project with the greatest care”. Max left that meeting with a clear conviction not knowing that only a year later the war would break out. He nonetheless started to work on the project that same year. “The studies were launched immediately,” he told the guests at the opening in 1928. “The Centre for Fine Arts was born.”

The official opening date of 4th of May 1928 has up to now been taken as the anniversary date of the Centre, and so in the past the celebrations had often been linked to that date. The Centre for Fine Arts’ director, Sophie Lauwers, believes that the date when the dream became a definite project ought to be honored as well. One of the goals of Project Palace (1st April – 21st of July) is to slow down and look at the period between Adolphe Max’s audience with the king in 1913, and the opening of the Centre in 1928.

The curator of the Project Palace exhibition, Wouter Davidts, asked several artists and collectives to create multiple works that could offer a new meaning to the Centre’s centenary. Each artist touches on a particular aspect of this celebration from his or her own perspective.

Some of the examples include Lynn Cassiers, who is creating a contemporary hymn for the institution, while Sammy Baloji, Johan Lagae and Traumnovelle will explore Belgium’s colonial past and its link to institutions such as the Centre for Fine Arts. Lara Almaracegui studies the materiality of the building and, with her installation, reminds viewers of the gigantic steel structure that stood in the Horta Hall from 1972 until the early 1990s. Liam Gillick will polish the monumental steps in the Horta Hall with vodka and glitter, the remnants of a spectacular party.
Project Palace is not a chronological narrative of the highlights of the past. Rather, it offers a glimpse into how contemporary artists understand the present – and envision the future – of the Centre for Fine Arts in Brussels.