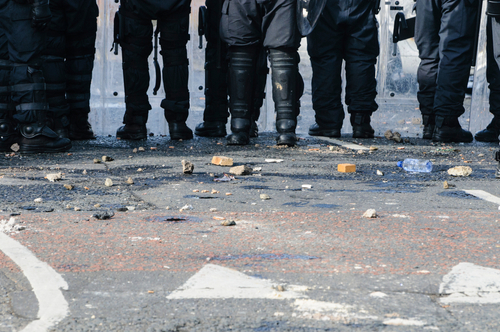 Belfast, UK, 12 July 2012 - Stones and bricks litter the road as police riot squad move forward to force a crowd of youths to retreat.

London (Brussels Morning) The UK government is considering an intergovernmental meeting to help resolve rising tensions in Northern Ireland, although concerns abound Dublin’s involvement could anger unionists. Meanwhile, the EU and UK work to amend the Northern Ireland protocol in the Brexit agreement while US President Joe Biden urges calm.

UK Prime Minister Boris Johnson did not disclude travelling to Belfast should violence continue after a mourning period had passed for Prince Philip, who died on Friday.

Ireland’s taoiseach, Micheál Martin has warned, however, Northern Ireland must not “spiral back to that dark place of sectarian murders and political discord” and that the country’s involvement could spark discord.

Renewed concern comes after riots broke out in what observers call the worst spate of violence in the province since the end of the troubles.

Reports suggest 88 police personnel have been hurt since 29 March with eight consecutive nights of violence in April, officers reportedly responding with water canons.

Various towns and cities in both unionist and nationalist areas have experienced unrest in the form of protests or young people throwing bricks at police officers. Last Wednesday, sectarian clashes emerged along the “peace wall” in west Belfast, which divides majority Protestant loyalist and Catholic nationalist communities, the former wanting to remain part of the UK while the latter seek a united Ireland.

The involvement of children has alarmed many, McAleese telling Marr young people were still being “taught to hate”.

Northern Ireland’s children’s commissioner Koulla Yiasouma said on BBC Radio 4 that “coercion by adults of vulnerable and at-risk children” was within “that safeguarding family of abuses children may suffer and experience”.

Committed to peace Last week Biden and Northern Ireland secretary Brandon Lewis urged calm while the government has stressed it is “committed to protecting the Belfast (Good Friday) Agreement”.

Meanwhile, the UK and EU are working to establish post-Brexit trade rules in Northern Ireland to help reduce tensions, which many observers warned could ensue should border checks undermine Northern Ireland’s place in the UK or a hard border emerge on the island of Ireland.

Loyalist paramilitaries wrote to Boris Johnson last month, withdrawing their support for the 1998 peace agreement — the Good Friday Agreement — which ended over 30 years of violence.

Currently, there is a border in the Irish Sea and despite early assurances there would be no customs checks, there have been safety checks on food and customs coming from Great Britain to Northern Ireland, the issues around which current negotiations seek to iron out.

While Brexit fallout has in part fuelled disenchantment in the region, some point to the enablement of violence by criminal gangs present in loyalist strongholds, including by senior figures in the Ulster Defence Association and Ulster Volunteer Force.

Some are using the opportunity to retaliate after a police crackdown in criminality in some areas, say analysts.

Others believe one of the triggers to new fighting was the decision not to prosecute Sinn Feín leader for breaching pandemic restrictions at a funeral for former IRA member Bobby Storey, which attracted around 2,000 people leading to resentment police were exercising “double standards”.

Negotiations between the UK and EU will progress during the week.