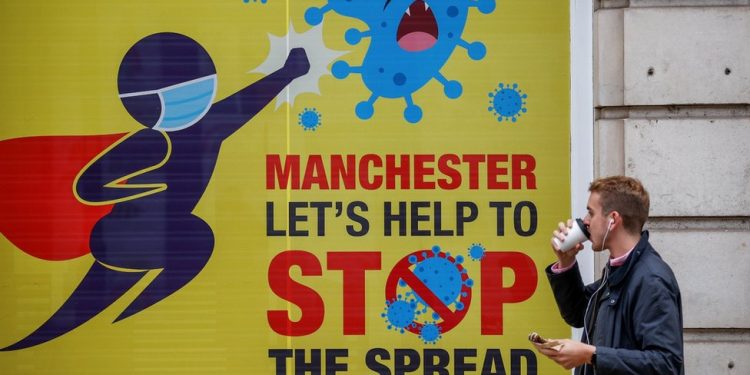 London (Brussels Morning) In the last few weeks, the UK government has unveiled a localised approach to restrictions to help stem the curb of coronavirus with areas placed on a three-tier system according to risk, based on the number of cases and infection rate.

Among those to join the highest-ranked area on tier 3, causing non-food serving pubs to close, and inter-household mixing to stop, was the Greater Manchester area, on terms its Mayor Andy Burnham was not prepared to a accept without a fight.

Delivering an impassioned speech to declare just that — that the North of England would not be sacrificed — he earned himself the label “King of the North”.

He said restrictions would be a death knell to local businesses without better support from Westminster’s coffers. And in any case, the government’s approach is not sure to work.

“The Deputy Chief Medical Officer told Greater Manchester Leaders that to bring the infection rates down any regional lockdown would require widespread closures way beyond pubs to stand any chance of working and would have to be done in tandem with other neighbouring regions. And, even then, it would not be certain to work,” he said on 15 October outside Manchester City’s Central Library.

“They are asking us to gamble our residents’ jobs, homes, and businesses – and a large chunk of our economy – on a strategy that their own experts tell them might not work”, he continued.

“The only thing certain to work, as the DCMO told us last night is a national lockdown.

But the government told us this morning it is unwilling to do that because of the damage it will do to the national economy.

“Greater Manchester, the Liverpool City-Region and Lancashire are being set up as the canaries in the coalmine for an experimental regional lockdown strategy as an attempt to prevent the expense of what is truly needed”.

His spirited words were lost on the government, however, as Prime Minister Boris Johnson vowed to intervene should Burnham not accept the move to tier three restrictions.

Among the Mayors’ demands were a “full and fair 80 percent furlough for all affected workers”, 80 percent income support for the self-employed and a business compensation scheme.

The package would have required at least £90 million to cover the furlough scheme and Manchester was reportedly prepared to accept £65 million. They ended up with an offer of £60 million as well as £22 million to help leaders “implement and enforce restrictions”, including the National Health Servce’s track and trace programme, which was purportedly an amount smaller than other tier 3 regions i.e., Lancashire and Liverpool City Region.

As they wrangled over £5 million, the £60 million was left for council leaders to secure funding from, with Bolton being the first to break from the Mayor’s forceful line.

Labour MPs have scrambled Burnham’s defence with a Labour vote scheduled to ask MPs to agree that the government should publish a “clear and fair national criteria for financial support for jobs and businesses” in areas with the greatest restrictions.

Downing Street feels like Burnham has been playing to the gallery, mused the Spectator’s journalists. They also noted that Tier 1 Tory MPs, in areas with medium restrictions, wrote to Manchester, saying ‘we know you’re in trouble’, but ‘don’t bring us down with you’, which was likely to exacerbate the North-South divide.

Some have argued that Burnham’s stand could win Labour some of those seats in the North lost to the Conservatives during the last election.

“But by rallying the north against what he portrays as a distant and uncaring southern elite – saying on Tuesday that it was people “too often forgotten by those in power” who bear the brunt of large-scale restrictions – he could have an unexpected effect across the red wall seats that were decisive at the last election”, wrote John Rentoul in his Indy Voices column.

Jennifer Williams from Manchester Evening News, meanwhile, indicates that there wasn’t as much unity within Manchester as appeared. While there was consensus on both sides of the political aisle that the restrictions were objectionable, the basis of the objections differed, particularly around economic restrictions. Various MPs begged better solutions, such as a shielding programme for the most vulnerable or a circuit break — a short period of absolute lockdown nationally.

Williams also notes something else about Burnham’s play, which she said was more about regions being trusted with more power. To those ends, Burnham has used his past Westminster experience as a shadow minister to feed into what the leadership would respond to, knowing he would also get the media’s attention.

“And so Greater Manchester’s row has played out not like a traditional dispute between local government and ministers – which usually go ignored – but like classic Westminster theatre, with a hint of Alan Bleasdale thrown in”, she wrote.

Ben Chu in the Independent also recognised the dispute as part of a wider battle over power between central government and the regions.

The Guardian’s Owen Jones argues that the Tories are now not acting in the best interests of Mancunians, but are making an example of them to punish Burnham for “daring to disobey them”.

“If the government were to concede to Burnham’s demands, other cities and regions would feel emboldened to demand support for their struggling citizens, too”, Jones wrote, drawing in comparison to the 1980s treatment by Thatcher’s government of the miners:

“In the 1980s, it was Britain’s miners who were faced down so that other workers could be taught a lesson. As Manchester‘s bartenders, bookies and taxi drivers are about to discover, the Conservatives will respond to this pandemic as they do to every crisis: with cold-blooded class warfare”.

Some have mooted that Burnham may be eyeing himself a position within Labour’s leadership — as its leader.

Archie Bland bats back on that assumption in his report in the Guardian on Burnham’s King of the North tag, as a Labour frontbench MP told him those suggestions are mere reflex saying, “I suspect he doesn’t have serious ambitions to lead the party any more, and of course that’s hugely liberating.

“He’s not calculating, he’s just being, and that’s why it’s working. It’s been a long time since the north has had such a powerful voice”.