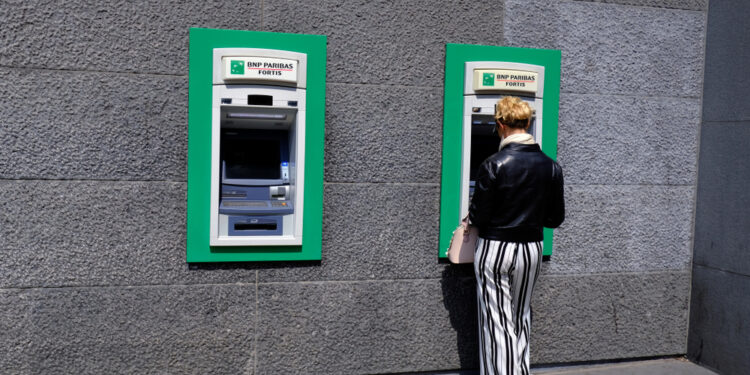 Brussels, (Brussels Morning)- Last week, the Brussels parliament opposed the plan of the four major banks to install a neutral network of ATMs in the city. They fear an unequal distribution of the number of ATMs in the capital and a wider digital divide. But Brussels does not have the power to impose restrictions on the banks, so the proposals have to be looked at at the federal level.

The ‘Batopin’ company – short for ‘Belgian ATM Optimization Initiative’ – was founded in 2020 by the major banks KBC, Belfius, ING Belgium and BNP Paribas Fortis said BRUZZ. The aim of the four participating banks is to operate neutral ATMs. With this they strive for a ‘cashless society’ and a digitization of payment methods. ‘Not cashless, but less cash’, is their slogan.

Many existing ATMs will disappear as a result of this plan. By 2024, the four major banks want to go from 6,000 to 2,400 ATMs. However, the Batopin plan promises that every resident will have access to a neutral ATM within 5 kilometres of his or her home.

Many Brussels politicians are sceptical about the plan. They fear an unequal distribution of the number of vending machines in the capital, a problem that is already occurring and leading to problems in Heembeek and Molenbeek , for example. “There are already very few vending machines in some neighbourhoods . Removing another three thousand will not solve the problem,” said Brussels MP and ex-mayor Marc-Jean Ghyssels (PS), co-initiator of a proposed resolution that Ecolo and PS put on the table, to BRUZZ. According to the initiators, the existing gap between the municipalities is widening as a result.

Ultimately, all parties in parliament supported the concerns about the distribution of ATMs, with the exception of the N-VA.

The parties are calling for a moratorium on removing existing ATMs. “Besides the fact that the new vending machines are not ideally located geographically, this will create a greater digital and social divide between the inhabitants of the capital,” said Ghyssels. When distributing ATMs, not only geographical criteria may play a role for the promoters, but also the socio-economic situation of a neighbourhood, the population density, the touristic importance of the area and how easily the area is accessible.

Due to the lack of consultation with the Batopin company and the problem of access to cash, both sides are calling for a democratic debate with associations, banks and citizens. “The purpose of our moratorium is to sound the alarm. On the day when there is no more cash in circulation, the customers will be taken hostage by the banks,” Ghyssels said in La Capitale on Saturday .

But because Brussels is not authorised to impose restrictions on the banks, the federal level is now looking with hope. Ministers Pierre-Yves Dermagne (PS) and Vincent Van Peteghem (CD&V) are currently studying the file.

According to a file by Bruxelles Formation, 25 percent of the inhabitants of Brussels hardly use and understand the internet. One in four Brussels residents would therefore not be on the digital train, and removing the ATMs would further widen the gap. A study by the King Baudouin Foundation even mentions three out of ten .

“Pushing digital payment methods also makes it difficult for local merchants. Newsagents, grocers or fairground stalls cannot be profitable without cash, in the long term they will have to close their doors,” says MP Ghyssels.