A new self picking farm has started in Brussels 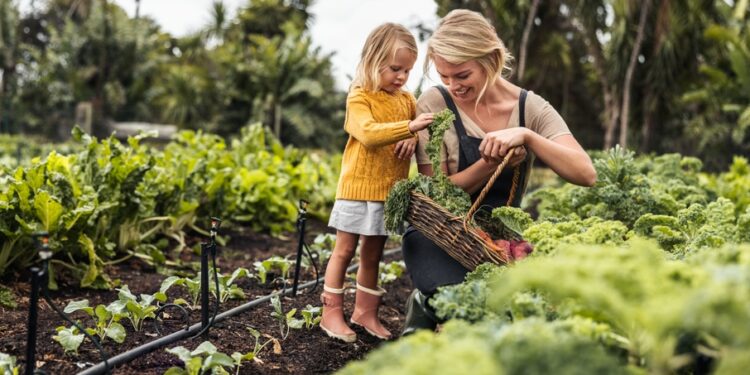 One hundred percent Brussels is not the self-harvest farm: the fields themselves are located in Sint-Pieters-Leeuw, just across the regional border. But the main entrance, a bridge over the Vogelzang Peek behind the park near the Erasmus hospital, is in Anderlecht. The name Perkuus is a reference to the dialect word for ‘burkozen’, the small family farms in the region that used to grow fruit and vegetables for Brussels and the Rand.

Founders are Hilde De Boeck and Charlotte Vandendriessche, Dutch-speaking inhabitants of Brussels from Anderlecht and Vorst respectively, who found each other after a career switch to organic farming in their search for suitable agricultural land close to the city.

After a career as a biomedical researcher, De Boeck worked for about five years for the Het Neerhof petting zoo in Dilbeek, after which he expanded deliveries to a few Brussels organic shops in his own field. Vandendriessche comes from the social sector and started a self-picking project two years ago within the La Finca farm in Wezembeek-Oppem. They decided to join forces. They were given the site of just over three hectares for Perkuus on loan from the Flemish Land Agency (VLM), which organised a call for projects on short-chain agriculture, said  BRUZZ.

“This is a very sustainable way of growing vegetables for a local market,” says Vandendriessche, while standing in her field. “At the same time, we are bringing people back into contact with nature and the places where their food comes from. It’s an experience. They meet new people there, and they can also combine a bike ride to Perkuus with a picnic on the spot.”

The farmers’ wives are targeting local residents, people from municipalities such as Anderlecht and Vorst, and the Vlaamse Rand. “Because parking here is not that easy. This is only possible on a paying basis on the grounds of the Erasmus hospital. But the participants can easily cycle or walk here, as the site is located on the Groene Wandeling, and then spend some time outside. In case of bad weather, the Erasmus metro stop is an alternative.”

Like Chant des Cailles and Courjette, Perkuus is a CSA project: ‘community supported agriculture’. Each year, participants pay in advance for a ‘harvest share’ with which the female farmers pay the costs of cultivation and pay themselves a salary. The participants come to harvest themselves, when it suits them best.

From spinach to celeriac

Because Perkuus only starts on 1 June and the harvest year is therefore one month shorter than usual, the participants pay 366 euros per adult share of the harvest, or 1 euro per day. The age x 21 euros applies to a child. But those who prefer to split the amount can pay in four instalments at Perkuus, or contact us for another customised payment arrangement.

For their membership fee, subscribers can come and harvest the whole year from next month. “The spinach is almost ready to harvest, just like the broad beans, snow peas and peas,” Vandendriessche sums up. “We will also have lots of lettuce, chives, parsley, mint and spring onions.”

“In the summer, tomatoes, radishes and turnips, courgettes, sweet corn, peppers and aubergines follow. In autumn, parsnips, celeriac, Brussels sprouts, carrots, leeks, cabbages and pumpkins are on the menu. When the tomatoes are gone, we refill the greenhouses with, among other things, chervil, purslane and lamb’s lettuce. Many people do not realise how many vegetables they can get in the winter.”

Through an app and a biweekly newsletter, participants are kept informed about what is currently harvestable. On the field itself, a sign repeats those guidelines and they work like most self-picking farms with a flag system: a yellow flag stands for harvesting for normal use – rules can be found in the app and on the board – a red flag stands for abundance. You can take as much as you want with you, because the proceeds are high at that time and many other participants are on holiday, for example.

“Now I buy my vegetables at Abattoir, but soon I’ll be taking a bike ride along the canal instead,” says Jan Denoo (27) from Cureghem, who is already a member of Perkuus.

“I see this more as a weekly or biweekly trip outside the city than just shopping. I have already helped to plant things and such a situation lends itself to spontaneously starting a conversation with others. Or just say nothing and enjoy the sun together. I immediately had a holiday feeling for half a day. You can also easily combine a harvest with a bike ride in Pajottenland. After a year I will evaluate whether I hit it often enough in the winter.”

Sonja Verschueren (43) lives just a ten-minute walk from Perkuus. “I know the place because I often go for a walk with my dog. For someone who, like me, lives in an apartment, a garden is not an option, but I think it would be great fun to dig into the soil with my hands, pick my own fresh vegetables and enjoy nature at the same time. And that too at irregular hours, when it suits me. I bought myself wellies yesterday to be able to harvest ( laughs ).”