Sun&Sea, or the apocalyptic pavilion 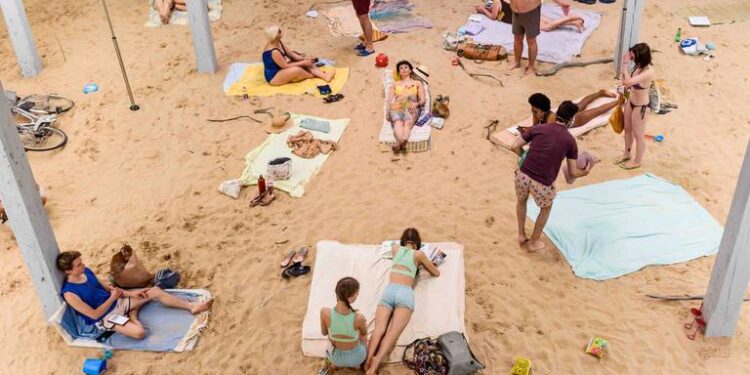 A glance at Sun&Sea, the most apocalyptic performance of the Biennale (edition 2019).

Hot outside, hot inside

Italy (Brussels Morning Newspaper) Hot outside, even hotter inside. In a humid atmosphere, reminiscent of that suffocating sensation felt only at the Tate Gallery within Sun, installation by Olafur Eliasson, you access the Théâtre des Tanneurs in Brussels for a weekend completely sold out. Almost three years of waiting, pandemic permitting, endless queues in Venice in 2019 to enter the Lithuanian pavilion and attend at least a minute of the one-hour performance that sent the public and critics into rapture; but last weekend, the much acclaimed performance Sun&Sea, has finally arrived in the theater.

The audience is given a booklet, like the opera: but we are at the beach. It sweats like the sea, but there is no water anywhere, and the sea seems a distant light-year memory. Only sand everywhere, twenty-five tons: the full of magazines, sunscreen, food and games, deck chairs, a mosaic of beach towels.

And dozens of bodies everywhere, massed like in a real seaside resort: the usual umbrella neighbor, middle aged, who can not stand anything and no one, and complains of every little swing; young people in costume playing, reading, hugging, eating, drinking. A dog passes through the towels, looks at the bananas, sniffs them: he prefers the tennis ball, which he follows with languor and interest, hoping for the mistake of the two players, who will at last drop the ball. He can take advantage of it.

Totally normal, apart from warm, up to here. But the three Lithuanian artists Rugilė Barzdžiukaitė, Vaiva Grainytė and Lina Lapelytė, a female trio, decide to cross the thin line between reality and fiction, in a lyrical form that approaches the “anti-baroque” theater.

A melody spreads, and a few of the imaginary bathers of this artificial beach begin to sing some chants that, from the booklet, seem only apparently almost senseless songs. Then, to a more careful reading, being carried away by the melodies, we discover human restlessness, the boredom of the universe, the concern for a planet increasingly prone to inhospitality, the climate threat that looms.

Too much sun drains the water

This wet heat reminds us even more terrified how close it is: “My eyelids are heavy/ My head is dizzy/Light and empty body/There’s no water left in the bottle”. In very few, and terrible words, one of the bathers, accompanied by the chorus of her beach neighbors, reminds us of the effects of terrestrial warming; too much sun drains the water.

Among pollution, garbage and radiation, the intense and captivating performance launches a desperate and powerful cry of alarm, hidden by an apparent narrative and choral simplification.

And the spectator, in the etymological and literal sense of the term, stands there watching: he watches helplessly at the scene, just as passively as he suffers the disastrous effects of climate change. The delicate balance staged with extreme mastery by the Lithuanian triad confirms the ethical, political and social character of the installation-performance, exposing with equal delicate attention the human body, which in the beach manifests all its cosmic fragility.

One of the most coveted prizes of the Biennale, a Golden Lion more than ever deserved.