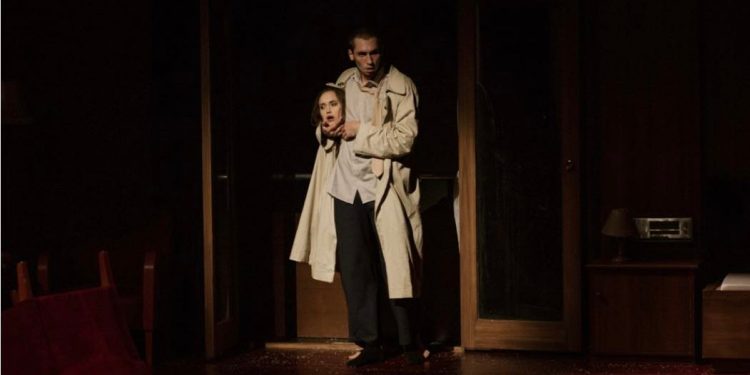 Italy (Brussels Morning Newspaper) One hundred and ten minutes of pure, disturbing, morbid ecstasy. Currently, a draw for sold out daily performances in the Brussels National Theatre. A much longer schedule awaits ahead, including a massive European tour, plus the possibility of live streaming (at this link).

The Belgian dance company, Peeping Tom, along with its two founding choreographers, Gabriela Carrizo and Franck Chartier, is staging an international production of its much acclaimed work, Triptych,  with the support of several institutions, an artistic combination that ensures the success of this almost unprecedented meta-theatrical operation. The commitment and investment represented in this vibrant stage production are long established, having been recognised as far back as 2016 when one of the three featured episodes won the coveted Dutch Zwaan award for most “impressive” dance performance.

A bit of Pina Bausch, a bit of David Lynch

Evoking the realm of renowned choreographer Pina Bausch and the film-maker David Lynch, and infused with heartfelt inspiration from the photographic atmospheres of Gregory Crewdson and the hallucinatory tales of David Cronenberg, Triptych, the title of the choreographic performance, encapsulates in three chapters — The Missing Door, The Lost Room and The Hidden Floor — the exploration of the final, apocalyptic moment of loss. Not just the ultimate loss, the death and loss of existence, but also those of personal and universal human decline: the collapse of thought, the perversion of feelings, how a sense  of precariousness and fear can dominate even familiar and ordinary occasions.

With rigorous live music that perfectly and synchronically punctuates their every minimal gesture and movement, dancers, acrobats and characters invade the theatre’s stage with in a show of  strength and vehemence. The scene transcends the classic bidimensional podium, from which the spectators helplessly witness the events. No curtain or artificial pause divides this triptych as dancers and crew dismantle and reassemble the set, an integral part of the performance, in what is a tangible representation of breaking down “the fourth wall” separating audience and performers.

As the great Italian playwright and novelist Luigi Pirandello used say, the physical and imaginary space that separates the spectator from the unfolding spectacle on the stage can suddenly disappear, troubling the archetypes of narrative fiction. Triptych does this magnificently.

The Missing Door, The Lost Room, The Hidden Floor

The Missing Door, which retraces the last, disturbing moments of a man’s life, is composed of phantasmagorical visions inside a half-empty room, midway between Pina Bausch’s Café Müller, and the menacing rooms of Lynch’s Twin Peaks.

The intermediate episode, The Lost Room, set in a transitory and insecure ship, between freedom and captivity, is no less impressive for its murky setting.

Amidst tormented, violent, rediscovered love affairs and a mysterious murder, the last moments of human life take on almost diabolical contours, reaching their climax in the final episode, The Hidden Floor. A truly apocalyptic scenario, in a violent storm outside a desert restaurant, that seems to drag the damned souls into the bowels of the earth, and which turns into a watery and muddy torrent that pervades the scene and the naked bodies of the characters.

All told, Triptych represents a labyrinth with no exit and becomes an authentic trap in which the dancers fight with determination and hope, transporting the spectator along with them in a convulsive and surreal struggle for survival.