The world has its first nations on UN organized crime index

by Bojan Stojkovski
in Uncategorised 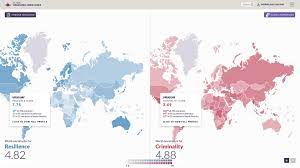 Skopje (Brussels Morning) The Global Organised Crime Index, published by the Global Initiative Against Transnational Organised Crime (GI-TOC), provides the first-ever assessment of illicit economies in all 193 UN member states.
The index is the first clear measurement of the scope, scale, and impact of organised crime. It also shows the penetration of criminal markets, the risks, and impact of organised crime, the dynamics of criminal actors, and the resilience of countries to deal with the problem.

Democracies tended to have higher levels of resilience to organised crime than authoritarian states, while state actors were the most dominant agents in blocking resilience and instead facilitated the growth of illicit economies.
The index also found that human trafficking was the “most pervasive of all criminal markets globally”.
Organised crime and criminal networks had blossomed during the Covid-19 pandemic as criminals found new ways to move contraband and took advantage of ports with low staffing levels.

The interactive map is based on 26 criminality and resilience indicators and allows users to compare and analyse data and scores at the macro as well as local levels. The crime was divided into 10 commodity-based criminal markets, and four criminal actor typologies – mafia-style groups, criminal networks, state-embedded actors, and foreign actors.

The 10 “commodity-based” criminal markets were human trafficking and smuggling, arms trafficking, crimes against flora and fauna, crimes involving nonrenewable resources, and then the separate trades in heroin, cocaine, cannabis, and synthetic drugs.

While criminal dynamics varied between countries and regions, the index highlighted the multidimensional and complex nature of the global organised crime, the report said.

With a resilience of a crime score of 5.21, North Macedonia ranked 76 out all the 193 world countries. North Macedonia was found to have an average criminal market ranking globally.
Aleksandar Srbinovski the field coordinator for North Macedonia stated that the analysis conclusively demonstrates that organised crime is the most pernicious threat to human security, development, and justice in the world today.

– The pandemic shone a spotlight on the inequalities, vulnerabilities, and systemic risk around the world, but it also showed us the need for global collaboration, looking at everything from a domestic perspective the GI-TOC will continue to follow all types of time in the country and in the region of the Western Balkans so in the years that will follow us we will have a clear perspective what kind of crime needs to be tackled so North Macedonia can have a clear European future in the EU – said Srbinovski.