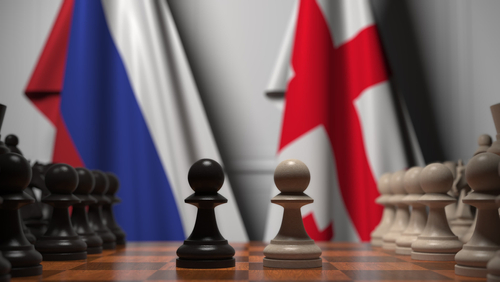 Flags of russia and georgia behind pawns on the chessboard. chess game or political rivalry

Paul M. Joyal paints a picture of Georgian and Ukrainian politician Mikheil Saakashvili – for years hailed as an effective pro-western reformer – as a man who uses Russian secret service techniques to manipulate public opinion at home and abroad.

Washington (Brussels Morning) As the EU mediators return to Tbilisi, Georgia to resolve the current political impasse, a careful review of the methods being undertaken by Georgian/Ukrainian politician Mikhail Saakashvili, aka Misha, and his United National Movement (UNM) Party are worthy of special attention. Caution is advisable, to avoid democratic backsliding and the loss of important milestones reached in the 2020 Georgian elections.

The history of the Soviet and now Russian intelligence service is a continuous refinement of the uniquely Russian or Soviet tradition of “provokatsiya”. This tradition is, in its most classic form, a practice by the state intelligence service to engage in a covertly orchestrated provocation for some strategic purpose. It seeks to obtain a reaction from the target that is in the interests of the actor. The most famous of all provocations is the “trust” conducted by Lenin’s Cheka to delude the Western powers that Bolshevism was weak and decaying, while monarchist opponents were growing stronger. In fact, the organisation was the creation of Felix Dzerzhinsky and the nescient intelligence service of the Bolsheviks to identify and lure traitors back into country for execution (Savinkov and Reilly) and obtain needed gold and funds for other intelligence purposes. This was the proto-typical Soviet strategic deception operation whose history remains part of the Russian intelligence services curriculum to this day.

Today, threads of this tradition are being undertaken in Georgia by foreign intelligence service director Sergei Naryshkin and curiously by a manipulative opposition leader who happens to be a former Georgian president living in the Ukraine and his voice in Georgia, Nika Melia. Melia stormed the Parliament in June 2019 – in the US we call that insurrection – was detained and then cut off his court-mandated tracking device. Melia is a man loyal to the flamboyant and ever manipulative Misha Saakashvili, who is in fact no longer a Georgian citizen but seems to have mastered this arcane art of the provocation for his own purposes.

Maybe Misha took these lessons to heart when he served in the KGB border guard service in Ukraine in his youth. All that is known is that he is bound and determined to capture power again in Georgia by any means. His history proves that he is very comfortable with seizing power by using any means available when he repeatedly fails at the ballot box in Georgia or Ukraine. Saakashvili is now attempting to use these skills to blackmail everyone to comply with his will. Unfortunately, it is being undertaken with the help of other opposition parties and even some of his Western backers and paid enablers.

In Trumpian fashion, Saakashvili set the stage for future provocations with a fiction before the parliamentary election of 2020. Saakashvili, knowing full well from internal polling that his coalition was heading for defeat, emulated Trump and moved to establish a false narrative before the 31 October elections in 2020, Georgia. On 14 October, Saakashvili launched his own version of the “Stop the Steal” campaign with the following social media posts:

“I will do my best; I am ready to sacrifice my life…we should not allow them to legalize the rigged elections”.

“We should make them tired, exhausted; we should create problems everywhere. The so-called government agencies that make illegal acts should be blocked. We should not let them in Parliament. If they start to attack, they will get a response”.

When Saakashvili mentioned the “so-called government agencies that makes illegal acts”, he must have been thinking of the “Constitutional Protection Department” of the Interior Ministry he once controlled, which in 2012, bugged over 50 computers of the nascent Georgian Dream coalition, turning on microphones and video cameras to spy on its leadership.  For some reason, this even included the apolitical Mrs. Ivanishvili’s computer. Leaving that aside, Saakashvili conveyed his intentions to resist and wear down regardless of outcome because of a fictional “stolen election.” However, no pre-election polls predicted the opposition’s victory, even those commissioned by his own party.

In fact, the government’s successful handling of the pandemic assured their victory. He would soon call for large super-spreader rallies against the pandemic, violating assembly restrictions, with few facemasks, very much in a Trump fashion. Georgian infections, which started rising in August would soon accelerate throughout the country after the Batumi UNM rally and Saakashvili’s call for “mass mobilisation”.

This election was extremely successful in implementing new mutually agreed upon reforms to allow greater diversity of representation from smaller political parties in the Georgian Parliament. At the time, the OSCE acknowledged that the “the reduced threshold of one per cent for parliamentary representation increased the competitiveness of the pre-election environment, with many new parties entering the political arena”.

These changes occurred after EU-US mediated negotiations in late 2019 and early 2020 between the opposition and the government, resulting in the March 2020 agreement that entailed “significant constitutional and Election Code reforms”, according to the International Republican Institute (IRI) report. The OSCE concluded that the elections “were competitive and, overall, fundamental freedoms were respected” thanks to “a substantially revised legal framework that provided a sound basis for holding democratic elections”, although “further efforts to address shortcomings are needed.”

The result was largest number of opposition members to the Parliament in Georgia’s history. The OSCE also made a number of recommendations for improvement after the 2020 elections, a possible positive outline for legislatives remedies. But the opposition has refused to enter the Parliament, inflaming the situation, and not participating in the responsibilities of legislative governance. This is essentially an illiberal approach, more in the agitating or propaganda Soviet tradition of provokatsiya than a method akin to a Western democracy.

The opposition, skilled in the art of Russian KGB styled “provokatsiya” refuses to compromise and plunges the country into a precarious position by boycotting entry into the parliament, which now risks the entire reputation of a nation that has carefully developed its democratic credentials under considerable challenges. This refusal is being managed and directed by a Ukrainian citizen who is focused on bending the situation to his will in a way that is not in the best interests of the Georgian people.

As President Putin and Defense Minister Shoigu dine for the cameras in Siberian outdoor splendor, discussions will undoubtedly include how Georgia fits into their plans. Surely, they are reviewing the success of reflexive control operation leading to the 2008 war. The question is, are they engaged in another reflexive control operation now in Ukraine with Saakashvili? The provocative behavior of the opposition, a new government team at the helm, and mediation by the EU, will no doubt factor into their active measure calculus of the Russian intelligence options.

We see it in Director Naryshkin’s statement in its demarche to the US government and its elevation of Saakashvili as the founder of Georgian democracy. It is pure rubbish.

The time is now to short circuit Russia’s plans, convincing elected MPs to enter parliament and begin the work the people expect from their newly elected representatives. If not, it is the perfect field of operations for Russian mischief and maybe even more.

On 10 November, then Prime Minister Giorgi Gakharia, who was recovering from COVID-19, called for dialogue:

“The process, which is being dragged into the streets, must move to political and legal platforms”.

It is now almost April. It will be impossible to achieve progress if the opposition continues to refuse their parliamentary mandates.  At this time, the only chance for these negotiations to bear fruit will be if the opposition accepts the democratic norms and enters the Parliament.

The “provokatsiya” must end free of any other demands or redlines. Western leadership must not allow this to continue. It is illiberal and undemocratic. This is a litmus test for the willingness of all parties to play their role in politics rather than engage in endless street fighting and demonstrations, destroying Georgia’s reputation and ability to attract tourists so vital for Georgia’s economic recovery. Enough is enough. The Western diplomats of good intentions should have no more of it either. The Parliament and all parties should now work to address issues and reforms that ensure Western support. The time of endless street theatrics and unrealistic demands is over.