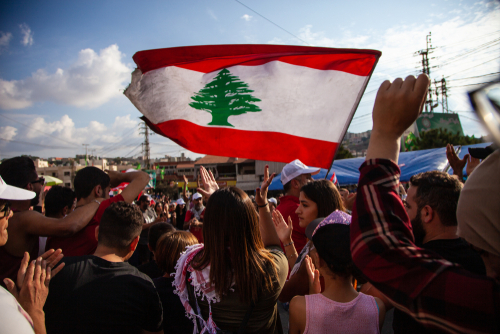 Nabatieh, South Government / Lebanon - 10 20 2019: Lebanese Protesters rising Lebanon Flag in the Sky at the Revolution against the Government

Paris (Brussels Morning) Lebanon still has no government, more than seven months after a devastating explosion at the Beirut port, which obliterated entire neighborhoods and crippled an already destroyed economy.

The egos of the political class egos and geopolitical calculations by regional powers have made it so far impossible to agree on a much-needed cabinet to handle the country’s reconstruction and international aid package negotiations.

As Lebanon faces a deepening COVID-19 crisis and serious lack of hospital material and staff, aid has came in the form of oxygen supplies yesterday, not least from Syria.

Negotiations between President Michel Aoun and Prime Minister-designate Saad Hariri broke down again earlier this week, as the top officials failed to reach a viable agreement since October last year. Hariri was named prime minister almost a year after stepping down when thousands of people took to the streets to denounce government inaction and corruption, and to demand serious reforms. Public outrage is soaring again, as the country sinks into an unprecedented financial crisis and no breakthrough in government formation is to be expected soon.

Key obstacles remain unchanged, concerning mainly granting the finance portfolio to the two Shi‘a parties, Hezbollah and Amal, Aoun’s insistence on holding a blocking third in any new government and Hariri’s refusal to hand the interior and justice ministries over to Aoun and his son-in-law Gebran Bassil.

In this latest spat, Hariri told journalists in Beirut:

“Unfortunately, yesterday he sent me a list of cabinet members, with distribution of posts according to different sects and political parties, with a message that said: ‘It’s best to fill this in’. This is unacceptable, because it is not the prime minister’s job to fill papers given to him by someone and it is not the president’s job to form a government”.

The ruling elite’s stubborn refusal to compromise exasperates the Lebanese who see in it a mere act of mockery and risks a “multifaceted collapse, with no effort to prevent it”.

According to Diwan editor Michael Young, “not only do they fear that a genuine reform process would undermine their political power, but the cartel of sectarian leaders ruling the country has lost all cohesiveness since it can no longer agree over how to collectively divide the spoils of the now-bankrupt Lebanese state”.

There is a lot more that impedes the cabinet formation than the egos of the Lebanese politicians. Regional powers with a historical influence on Lebanon’s factions have reasons to delay any decision on a cabinet, based on their own foreign policy objectives. For their own reasons, Lebanese factions are wary of the regional implications, hence perpetuating the political imbroglio.

Iran-aligned Hezbollah has done less to end the stalemate than its stated position for a swift solution, presumably buying time until negotiations over Tehran’s nuclear program resume. On the other hand, as Saudi Arabia seeks to block Hezbollah’s role in Lebanese affairs, Hariri could be under pressure from Riyadh for his effort to accommodate the Shi’a movement.

According to Mohanad Hage Ali, fellow at the Carnegie Middle East Centre, Hariri’s stepping down at this point would amount to a failure after five months of negotiations, and would pave the way for other Sunni politicians, including his brother Bahaa, to gain Riyadh’s trust. For President Aoun, the cabinet formation along his own terms would allow him enough leverage to secure the presidency for his son-in-law at the end of his mandate in 2022.

A cabinet formation would lead to foreign governments pushing for serious reforms, a prerequisite for the unlocking of billions of dollars in financial aid by the IMF and international creditors. However, these reforms would lead to curb the prerogatives and influence of the various political factions.

“They are all taking part in a spectacle bordering on the ridiculous”, Hage Ali adds.

But this protracted period of political instability is especially harmful for the Lebanese people, with now more than 50% living on the edge of poverty. Officially, one dollar amounts to 1,500 Lebanese lira, but at the beginning of March, this ratio was closer to 13,000 lira in the black market. Inflation and unemployment are skyrocketing as basic goods are inaccessible to the Lebanese. The port explosion and COVID-19 pandemic have exacerbated the crisis, initially due to the state’s massive debt, while Al-Monitor reports that Lebanon’s GDP has shrunk by 20% and the lira lost about 90% of its value in 2020.

Syrian and Palestinian refugees face even worse conditions in camps throughout the country, relying on international humanitarian NGOs. Lebanon hosts an estimated two million refugees deprived from accessing employment and basic rights. Although Lebanon has signed most human rights treaties relevant to the protection of refugees, the country has not signed the 1951 Refugee Convention, thus isn’t bound by the obligation to recognise the refugee status of thousands of people.

“Now that we are almost eight months without a fully-empowered government, isn’t now the time to let go of those demands? To begin compromising?”, Reuters reported the ambassador saying.

Lebanese media outlet Naharnet cited anonymous diplomatic sources as saying that there is coordination among US, France and Saudi Arabia in order to launch a “specific initiative”. The report added that Saudi Ambassador to Lebanon Walid al-Bukhari held separate talks with the ambassadors of France and of the US Dorothy Shea, who share a “general dissatisfaction” over the latest developments.

French Foreign Minister Jean-Yves Le Drian pressed his European counterparts to take action to prevent Lebanon’s collapse, France24 reported. “I want us to be able to discuss together the levers that would allow us to put pressure on the Lebanese authorities”, Le Drian said.

President Emmanuel Macron heads the international efforts to come up with a functional cabinet and start implementing the necessary reforms to reconstruct the economy, but his initiative has produced no tangible results so far.