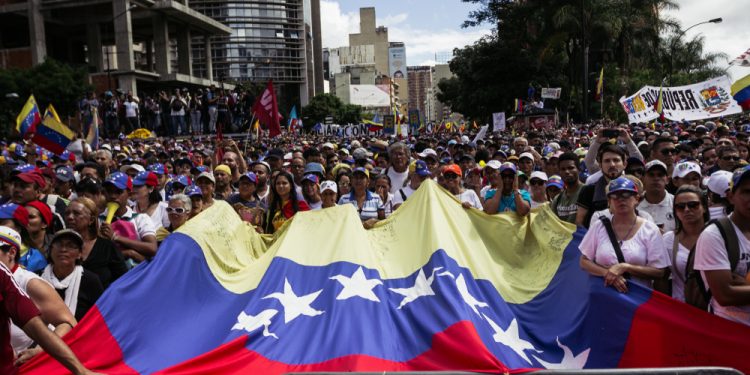 Caracas, Capital District/Venezuela; 01-23-2019: Group of protesters shows their support for Juan Guaido. During his oath

Brussels (Brussels Morning) The EU, the US and a dozen Latin American countries dismiss as illegitimate the outcome of the parliamentary election in Venezuela that President Nicolás Maduro’s allies claim to have won, Reuters reported yesterday, Monday.

The electoral council notes that 31% of eligible voters cast their votes on Sunday, a turnout rate half that of the previous election in 2015. The socialist Great Patriotic Pole coalition that supports Maduro won 68.9% of the reduced vote. The opposition boycotted the polls, calling the election a farce aimed at consolidating a dictatorship.

The pro-Maduro coalition won despite the ruined economy, mass emigration and US sanctions. US Secretary of State Mike Pompeo went on record saying that numerous democracies, including the US, condemn “this charade which failed to meet any minimum standard of credibility.”

High Representative of the EU for Foreign Affairs and Security Policy Josep Borrell said the election did not comply with international standards. A number of Latin American countries including Brazil and Colombia criticised the vote, claiming it lacked legality and legitimacy.

Lead-up to the election

Earlier this year, the Supreme Court reinstated politicians who had been expelled from a number of opposition parties to leadership roles in the very parties that had dismissed them. The politicians in question had been expelled initially because of their alleged tiers to Maduro. Their reinstatement was one of the reasons why the Venezuelan opposition dismissed the election outcome as a sham.

Besides appointing an electoral council without opposition representation, Maduro prevented any meaningful observation of the election. Nonetheless, his supporters and allies insisted that electoral conditions had not changed compared to 2015, an election the opposition won. Meanwhile, the government dismissed foreign criticism.

Despite winning control of the parliament in 2015, the opposition found its hands were tied since the Supreme Court, supporting Maduro, repeatedly blocked its legislative attempts. Two years later, Maduro formed the National Constituent Assembly, a parallel body supplanting the parliament.

Although the parliament was rendered impotent, the opposition used it as a platform to criticise Maduro for corruption, human rights violations and economic mismanagement, in the process riling his United Socialist Party of Venezuela. Opposition politician and House Speaker Juan Guaidó laid claim to the post of President last year, disputing Maduro’s re-election in 2018 as illegitimate. More than 50 countries recognised Guaidó as President, including the US.