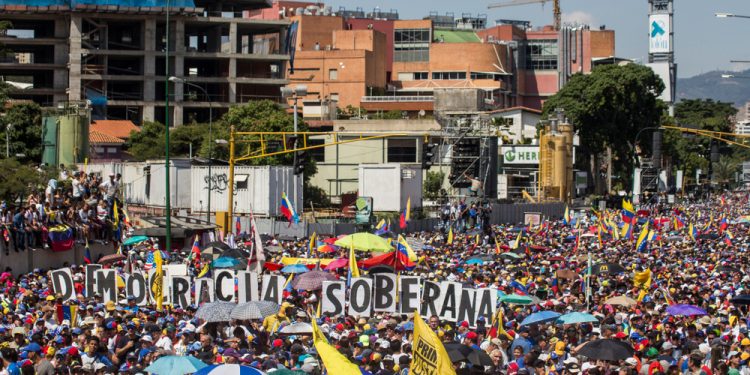 What an absolute brass neck he has! As far as I know, elections are a critical democratic solution, although interestingly not a requirement for some of the EU’s favoured friends, such as Saudi Arabia, Qatar, and many Gulf states.

Venezuela, however, does have elections and invited observers from all over the world to oversee and monitor the 6 December National Assembly polls. Like the old colonial powers, the EU responded to tell this sovereign country that they were not ‘ready’.

The European Parliament’s AFET Committee frantically issued a press statement that the EU would not have anything to with them, so how could they condemn them as not fair, free, or democratic?

No doubt, their concern was sparked by the fact that four elected MEPs dared to answer the international call for observers and travel to Venezuela so that we could see for ourselves. We joined parliamentarians and activists from all across Latin America, from the US, Russia, Turkey, Africa and many EU member states.

Contrary to the Western media narrative, the elections did not take place without the participation of the opposition. In fact, these National Assembly elections were a constitutional requirement and followed dialogue and involvement with most of the opposition parties (including some of those who had previously supported the US puppet self-proclaimed ‘President’ Juan Guiado); several changes were made, including increasing the number of seats to 277.

Over 14,000 candidates participated in the vote from 94% of the country’s political parties. We had the opportunity to scrutinise and witness every stage of the process and speak to the opposition parties and voters.

The voting scheme itself is extremely sophisticated, with electronic voting machines manufactured in India and operational by voters identified by their ID cards and thumbprint.

A paper printout of the vote is placed by the voter in the ballot box and a manual record of the thumbprint and signature on the electoral register for each station. Provision is made in every polling room for witnesses from the government and opposition. Fifty percent of boxes at each polling station is audited with the involvement of all parties.

On election day, we saw people being turned away for not being on the register. Assistance was provided for the elderly and disabled and there were robust COVID-19 precautions.

Those running the polling stations appeared competent and capable, with attention given to making sure the voter understood how to vote. Deputies are elected from a mix of a national list, regional list, and local list of individual candidates with the number of seats based on those registered in each locality. There is also an allocation of seats for the indigenous communities.

Everyone had a chance to vote freely for whoever they liked. In the end, 31% voted, with the alliance led by the PSUV party of President Maduro coming out on top with 67% of the vote. That this is being spun to delegitimise the result does not stand up to scrutiny.

Of course, a higher turnout would have been preferable, but unfortunately, this is not entirely unusual. In many countries, voter turnout is in decline, with citizens fed up with politicians across the political spectrum and in circumstances far less difficult than Venezuela.

In fact, Romania’s Parliamentary elections on the same day had a similar turnout at 33%, while seven of the EU states had a turnout equal or substantially less than that figure in 2019. Where’s the discussion about the legitimacy of the European Parliament?

In Venezuela, traditionally, turnout is less in National Assembly elections. On top of that, the impact of the sanctions and economic hardship has seen millions of voters leave the country, undoubtedly impacted by COVID. The turnout cannot be explained as a boycott, although a small number of parties did not participate and called on people to stay away.

Why would you stay away from an election open to international scrutiny unless you knew you weren’t going to win? Much easier to cry foul as the US and its puppet did even before the election was held. This is not democratic.

Neither is the fact that the US sanctioned opposition leaders who took part in the election. Their only crime, wanting to vote in their own country to determine their fate, free from outside interference either militarily or through sanctions, and how dare the EU facilitate this breach of international law.

Life is very difficult for Venezuelans. The currency has collapsed with 1 million Bolivars equal to 1 US dollar in a country where the monthly wage is about 4 million Bolivars. Queues for petrol go on for hours because despite it being rich in oil the black liquid is difficult to extract and refine because of ageing equipment, the replacement of which is blocked due to sanctions.

Even the election observers got a taste of Venezuelan life with their plane back to Mexico, before its onward flight, forced down and held up for hours due to Colombia refusing permission to cross its airspace. This is an example of harassment that is routine.

If Joseph Borrell is interested in finding a peaceful and democratic solution, would he not be better off lifting the sanctions and demanding that the US does the same?

He is correct that the countries of Latin America are part of the solution, but they have already come together with leading representatives from across the continent coming to Venezuela for the election to rekindle the history of Simon Bolívar and his successful struggle to overthrow the Spanish colonialists. That is the future for peace in the region and the EU has to ask itself which side of history it will be on.