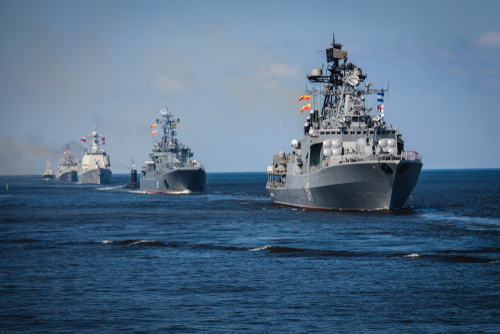 Russia’s deployment of amphibious assault warships in the Black Sea spells war and Russian President Vladimir Putin’s State of the Nation address tomorrow will prove it.

The prospects for this speech justifying military actions are a pregnant possibility and water supply to Crimea is likely to be one such cause the Russian premier will latch onto, not least because the effects of climate change are fully evident in Crimea. The implications are a violation of the Ukraine’s territorial integrity.

Lack of rain during the winter season has critically depleted the 22 reservoirs of Crimea, which have a potential combined capacity of 334 million cubic meters. In response to the invasion of Crimea, Ukraine took away the region’s main source of drinking water, supplied via the Dnieper River — Northern Crimean Canal.

Putin, a master at perception management, will likely rationalise any military action with this public health pretext.

The augmentation of the Black Sea fleet includes eight vessels of Serna, Dyugan, and Ondatra-class landing ships transferred from the Caspian Flotilla and passed under the Kerch Bridge, including three artillery boats and four support vessels. Additionally, four Project 775 Ropucha-class large landing ships, the Kaliningrad and Korolev from off the Baltic Fleet, and Kondopoga and Aleksandr Otrakovskiy from the Northern Fleet.

These new vessels passed northbound through the Bosphorus en route to the Black Sea on 17 April. Russia has also dispatched the Ropucha-class ship Novocherkassk to the Mediterranean, potentially giving the Black Sea fleet eight large amphibious ships capable of landing the naval infantry units of the Crimea-based 810th Naval Infantry Brigade on Ukraine’s coast, which is well beyond any previous naval exercise and must be understood as a war footing decision.

The ‘most likely’ attack plan is a maritime and land assault on southern Ukraine from Crimea to seize water supply facilities.

Since the occupation of Crimea, Russia has continued to build up its military forces in the occupied peninsula, which have sufficient capacity and mass for offensive purposes. The Ukraine military describes this as “potentially used to conduct unpredictable offense escalatory actions” from Crimea. The military further describes the situation as thus: “Effectively, Kremlin had been turning Crimea into a powerful military outpost. Moscow had already created a formidable standing formation in the Peninsula of more than 32,000 military personnel and a very significant amount of naval and air striking platforms”.

Russia has deployed over 50 military aircraft to participate in Black Sea exercises. According to the press service of Russia’s Military Southern District, there is also an air force buildup:

Su-27SM, Su-30SM fighters and Su-24M and Su-34 bombers and Su-25SM3 attack aircraft will participate and carry out rocket launches and bomb sea targets.

“Pilots of two formations (the 4th Army of the Air Force and Air Defence and the Black Sea Fleet – IF) will escort naval strike groups and act as part of reconnaissance strike complexes while ensuring security in the Black Sea”, the press release reads. Furthermore, Su-25SM3 attack aircraft from the Stavropol Territory were redeployed to the airfields of Crimea.

Transfer of formations of the 58th Combined Arms Army, stationed in the North Caucasus, has been dispatched for exercises in the Crimea. Intelligence received from an unmanned aerial vehicle (UAV) from the naval aviation and air defence of the Black Sea fleet was transferred to a detachment of missile ships at sea.

“The events will also involve air-planes and helicopters of naval aviation and air defence of the Black Sea Fleet”, said the fleet’s press service.

By the end of the month, the Russian land component in Crimea could account for 23 battle groups with 42,000 troops. They have integrated all these military assets in joint striking formations capable of implementing the entire range of kinetic weapon systems for offensive combat operations.

These military buildups have been matched with the closure of several sections of the Black Sea to passage by foreign vessels between 24 April and 31 October, according to the weekly bulletin of the Navigation and Oceanography Directorate of the Russian Ministry of Defence, while the US Navy has faced warnings to stay out of the Black Sea “for their own good”.

In summary, with all these recent deployments, Russia could potentially muster 56 battle groups fully combat-ready with 110,000 troops in the vicinity of Ukraine’s borders.

The recent exposure of sabotage in the Czech Republic should now be considered in light of Ukrainian events. The Czech Republic’s decision to charge two known Russian GRU operatives suspected of poisoning a man who allegedly supplied weapons to Ukraine and organising the detonation of a warehouse, which destroyed ammunition intended for the Ukrainian army.

The Czech police have identified two suspects in preparing the explosion: Alexander Mishkin and Anatoly Chepiga. They are the same two GRU operatives from Unit 21955 identified in the 2018 Novichok poisoning of former GRU officer Sergei Skripal and his daughter Julia in Salisbury, UK. The pair, “Russlan Boshirov” and “Alexander Petrov”, have left a trail of death and destruction in operations throughout Europe, inexplicably using the same aliases.

This revelation is a stark warning for all NATO countries that the GRU is operating on a war footing and must be considered an active threat for countries supporting the Ukrainian military, especially with ammunition and military weapons. Ukrainian Military and Security forces should take particular note and special security measures, including denial and deception of their most important weapon and supply systems, including anti-tank, missiles and air defence assets.

Moscow now has at least 110,000 heavily armed troops on the North-Eastern border of Ukraine and in Crimea. Russian commanders have moved forward and deployed sniper units all along the eastern Ukraine border. Russia also has advanced artillery and mortar teams supported by drone aircraft closer to the Northeast Ukrainian border. The Black Sea is filled with naval vessels and most concerning is the consolidation of their amphibious warfare vessels in the Black Sea, which has been matched with over 50 strike aircraft and additional troops have now reached about 50,000 combat troops. The situation is threatening and perilous — Putin’s speech tomorrow is not to be missed.

My special thanks to my old colleague and friend, Bruce Jones, Soviet and Russia expert in the UK for keeping me informed of the latest Russian military deployments. Information contained above have been featured in Janes Naval International, the Mirror. A special thanks to those brave and patriotic members of the Ukrainian Military for keeping me up to date on the Russian status of forces. Lastly, I thank the Jamestown Foundation for its long coverage of the former Soviet space.