Anti-racism is not a passive act. It requires permanent vigilance and limitless solidarity.

by Hande Taner
in Opinion, World 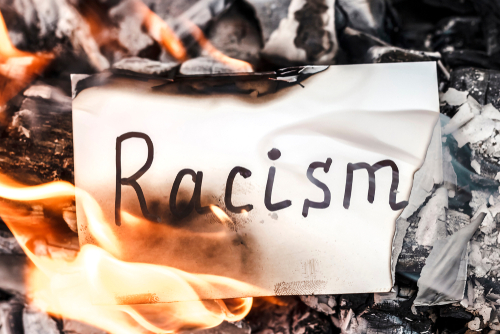 6 days ago we commemorated the Christchurch Attacks which saw the deaths of 51 innocents at mosques in New Zealand. There are few things more horrifying than seeing the livestream footage of children looking up as the murderer cold heartedly pulled the trigger to end their lives, whilst perverse strangers cheered him on online. How could anyone reduce their existence to doing such evil or supporting such evil.

This horror should have broken every decision maker’s indifference towards the growing smog of Islamophobia that has been filling the air we breathe in Europe. Islamophobia isn’t a political strategy, it isn’t an easy excuse for political failure, or a distraction, it isn’t clickbait or a way to sell papers. Christchurch teaches us, much like smog, left unchecked, Islamophobia is deadly.

The racists change their obsessions periodically but in this period the scapegoat is clearly in almost every European country the Muslim. Muslims have been made the answer to every insecurity and every uncertainty. Europe’s worries in the face of an unknowable future have been summed up in an obsession. ‘The Muslim must be stopped.’ ‘The Muslim must be driven out from public life.’ ‘The Muslim must be restrained and restricted.’ ‘Their Europeanness must be challenged even if they were born and raised here.’

We know too well that it is excessively dangerous for European politicians and media outlets to unite around a hatred or suspicion towards a small religious minority. Sometimes it can be sad to feel like the only one in the room to have read European history – the only one that has seen the playbook manifested into some of the worst actions ever seen on our shores.

I speak to young people from across our region every single day and when I ask about the state of racism in the communities they reside in, it is heartbreaking to hear the resignation many have come to regarding their own abilities to effectively engage in their societies. Some of them are not educated in the language to help them understand what they are experiencing – that prolonged glance when entering your lecture theatre, that rejected application due to your ethnic background ‘not fitting in’ within the culture – it’s racism, plain and simple.

As a Muslim woman in my mid-twenties, the anti-racism coordinator in the Joint Council on Youth of the Council of Europe and as the President of the Forum of European Muslim Youth and Student Organisations, I see two plausible futures. One which is full of fear and concern for the people I represent, where their education, employment and security is under constant threat, where their place of birth rejects them. Another, is one where our leaders inclusively represent all their constituents regardless of faith, colour or creed, one where anti-racism is taught in schools and one where every citizen feels like they can exist and be accepted as they are, so the generations to come can compare racism to a floppy disk. Extinct.

Those tasked with the responsibility of governing our societies must make an active effort to recognise the existence of this cancer in our societies and publish National Action Plans Against Racism (as mandated by the European Commission) that encompasses the real challenges faced by all minorities and faith groups.

We must never forget that civil society is the oxygen of democracy. It is how we keep the body politic rejuvenated. Yet it is where the racists seek to exclude Muslims first. They believe they own the European story. Yet it is a story written in dozens of languages by those who call our continent home of every race and religion.

Muslim youth are being locked out of this very civil society. Disinvited from meetings, unable to access the top table as a result of disinformation campaigns waged against by those that seek to ensure that anti-racism isn’t inclusive of our everyday struggles and experience. Anti-racism must be holistic, it must be targeted and it must be intersectional for it to really live up to its name – there is simply no other option.