Europe should take up the fight against Child Labour 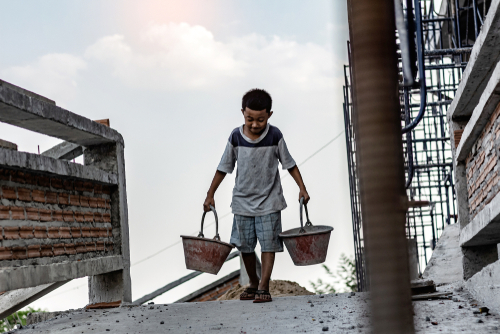 Brussels (Brussels Morning) This year marks the International Year for the Elimination of Child Labour. This provides us with a unique opportunity to shed some light on the plight of millions of children around the world, whose childhood has been abruptly cut short by the disturbing phenomenon of child labour.

It is estimated that 152,000,000 children are affected by child labour. It is of paramount importance to work out specific measures that protect children from being exploited in this way.

Amidst the COVID19 pandemic – that has dramatically hit all corners of the world during the last year and a half – the situation has worsened considerably, forcing many children into the labour market, very often in poor and sometimes dangerous conditions, so that they can try to help their families. More needs to be done to ensure a healthy childhood for all children, leaving no one behind.

The pandemic has prompted a spiralling economic recession, which has further exacerbated the precarious situation of many low income families, forcing them to resort to any possible means for survival, resulting in a sharp increase in child labour cases.

According to the latest International Labour Organization (ILO) and UNICEF Report, in comparison to previous economic crises that caused a reduction in the quality of living conditions, this crisis has resulted in many low and middle income countries experiencing a sharp decrease in the progress achieved in terms of reducing child labour, as well as in maintaining school attendance.

As Vice-Chair of the European Parliament Intergroup on Children’s Rights, I have been following very closely, with particular apprehension, the developments in the fight against child labour.  As Intergroup, we have called on the Commission many times to implement a zero tolerance policy against child labour.

When it comes to child labour, we are confronted with a gross violation of children’s fundamental rights. It constitutes a form of violence against children and as such, a flagrant violation of the UN Convention on the rights of the child, which is the single, most-ratified international human rights treaty in the world.

These are among the most heinous crimes against children. These crimes are by definition crossborder and do require a common, united European response for their eradication.

Children in middle and low income countries are particularly vulnerable when it comes to ending up in the hands of organised crime. Those who profit from organised crime have built a successful and lucrative business model at the expense of children and their families.

It is known that many of the child victims of trafficking are then employed in the labour market, forced to live in unspeakable conditions, where they experience extreme forms of deprivation of their liberty.

According to the 2020 United Nations Office on Drugs and Crime’s Global Report on Trafficking in Persons, the number of both boys and girls trafficked for forced labour has steadily increased over the last years.

The trafficking of human beings for forced labour presents specific challenges of its own, which require the attention of the EU legislator – as well as a wider and better international cooperation – given the crossborder nature of the issue.

In the European Parliament, thanks to the intense work carried out by the Intergroup on Children’s Rights, we have put forward a number of legislative provisions in the fight against trafficking of human beings – including for forced labour – with a special focus on children as vulnerable individuals.

The EU – following the Directive 36/2011 on preventing and combating trafficking in human beings and protecting its victims – appointed an EU anti-trafficking coordinator to address the global and cross-border challenges of human trafficking, in an attempt to better coordinate the fight against human trafficking, by also improving communication and cooperation among the law-enforcement authorities of EU Member States.

The COVID-19 pandemic has further contributed to the exponential growth of child sexual exploitation, leaving children much more exposed online and easy prey of perpetrators on the net.

This horrendous phenomenon poses numerous challenges and it has been at the centre of the tireless work carried out by the Intergroup on Children’s Rights in the European Parliament, in an effort to step up the EU’s action on a more effective fight against child sexual exploitation, both online and offline.

Over the last few months, great progress has been made across many different Committees of the European Parliament and in several policy areas to improve the protection of children in EU Member States and globally. In particular, the new EU Child Rights Strategy is the first of its kind and there is also the EU Strategy for a more effective fight against child sexual abuse and exploitation. The European Commission put forward these two programmatic documents after two important Resolutions of the European Parliament – initiated by the Intergroup on Children’s Rights – which laid out key recommendations for Member States to implement and identify a clear roadmap for specific legislative proposals, to ensure that all children are protected from all forms of violence.

As of next week, in the plenary session of the European Parliament, we are called to vote on the temporary derogation of the ePrivacy Directive to allow online communication services providers to continue using technological tools to detect child sexual abuse and exploitation online. This piece of legislation is an important step in the right direction in the fight against child sexual exploitation, as it aims to greatly reduce the number of cases through detection.

I hold that the fight against child labour requires a multi-stakeholder and holistic approach that involves all actors in society, including the families, to ensure that all boys and girls have access to quality education and are not victims of child labour.

The EU is the biggest donor for international aid in the world, therefore we need to rethink our cooperation and development policies to make them more effective in the fight against child sexual abuse in line with the values and principles of the EU Charter of Fundamental Rights and the UN Convention on the rights of the child.