by Jean-Patrick Clancy
in Europe 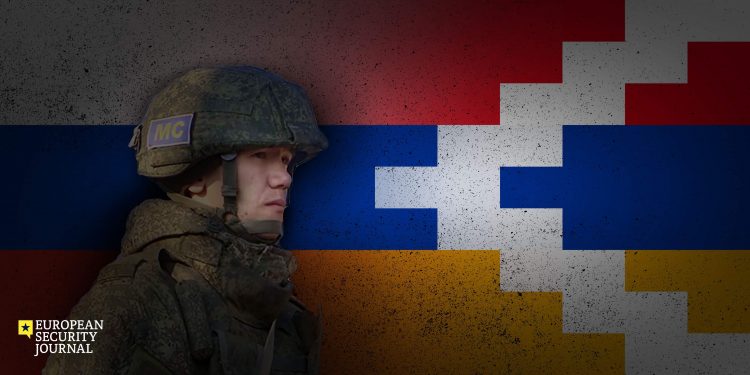 Brokering peace during the Nagorno-Karabakh conflict has allowed Russia to tighten its grip on the region.

Prague (Brussels Morning) The Russian-brokered ceasefire between Armenia and Azerbaijan has allowed Moscow to deploy its military in the strategically important South Caucasus, tightening its grip on the region without opposition from the West. Once again, Russia has turned another frozen conflict to its advantage and strengthened its geopolitical position in a privileged sphere of influence in the post-Soviet space.

Moscow has long maintained a permanent military presence in Armenia within the framework of the Russian-led Collective Security Treaty Organisation (CSTO). Armenia and Russia signed a 25-year basing agreement in 1995 with an automatic extension of five years should no party object to it — extended in 2010 to 2044 — allowing for the deployment of a permanent Russian contingent of between 3,000 to 5,000 troops at the 102nd Military Base near the city of Gyumri, close to the Turkish border.

Despite past controversies and some level of opposition, Armenia’s Defence Minister Vagharshak Harutyunyan hinted in February 2021 at the possibility of expanding and bolstering the 102nd Military Base. This move would allow for the redeployment of Russian forces closer to its border with Azerbaijan that would safeguard Armenia’s security and ensure its sovereignty and territorial integrity, all the while further strengthening Russia’s hold on the country.

The air force component of this military presence, in the context of the United Air Defense System of the CIS countries, is located at the 3624th Russian airbase at the Erebuni airport south of Yerevan and the Shirak airport in Gyumri. From there, 18 MiG-29 fighter jets could be deployed but also replaced by a more modern fleet of Su-30SM aircraft by 2021, according to a source from the Russian Ministry of Defense. A dozen Mi-24 attack helicopters and Mi-8 multi-role transport helicopters could also be deployed.

Unbeknown to many, these numbers are further inflated by approximately 4,500 Russian border guard troops stationed in Gyumri, Armavir, Artashat and Meghri. While initially responsible for protecting Armenia’s border with Turkey and Iran, Russia’s border guard service deployed additional troops to the border between Armenia and Azerbaijan following the truce agreement ending the six-week long war on 10 November 2020.

This presence has long been a source of heated debate between those questioning Moscow’s regional aspirations and the pro-Russian narrative of the need for deterrence vis-à-vis Turkey and Azerbaijan. Successive Armenian governments have viewed this presence as a key element of their national security strategies hence Yerevan’s never-ending security over-reliance on Russia in a region Moscow considers as its exclusive zone of influence.

The Russian-brokered ceasefire between Armenia and Azerbaijan allowed the latter to regain control of most of the territory it lost to Armenian forces in the first war, which ended in 1994. It also saw on 10 November the quasi-immediate Russian deployment of 1,960 service members, 90 armoured personnel carriers, 380 vehicles and various other pieces of hardware as part of the renewable five-year peacekeeping mission.

As well as monitoring the implementation of the ceasefire via observation posts, Russian forces have also been tasked with patrolling the road corridor through Lachin, connecting Nagorno-Karabakh to Armenia proper.

Their mandate and the nature of the peacekeepers’ hearts and minds operations, regularly boasted about on the Russian MoD’s official website, also include demining operations, assisting the safe return of refugees, restoring water and electricity, providing humanitarian and medical aid to the local population and lecturing students on civic defence and security measures.

This deployment, which will remain for at least five years, has allowed Moscow to reassert itself and solidify its footprint in the energy-rich region, strengthening both its power and position.

Furthermore, as pointed out by Laurence Broers from Chatham House, the absence of an exit strategy makes this deployment look more like an occupying force than a peacekeeping operation in the long term. After all, it is safe to assume that Russian forces will remain in the region indefinitely as lasting peace between Armenia and Azerbaijan seems unachievable.

This remains Russia’s largest current peacekeeping contingent with units from the 15th Motorised Rifle Brigade of the Central Military District. The same brigade saw the deployment of service members in Georgia’s Republic of Abkhazia between 2005 and 2008. It is also worth noting that members from the brigade also saw action during the brief 2008 Russo-Georgian war and were accused by InformNapalm activists of directly taking part in hostilities alongside pro-Russian separatists in Donbas, Ukraine.

The prospect of a long-term presence of peacekeepers in Nagorno-Karabakh is also gradually contributing towards the Russification of the enclave. The region’s de facto authorities had announced on 8 February 2021 new entry regulations for foreigners, which required Russian approval for “security purposes”. More recently, local lawmakers approved a proposal to make Russia the region’s second official language alongside Armenia to facilitate communication and coordination with their Russian counterparts and adapt to the prospects of a long-term peacekeeping commitment in Artsakh. In other words, to deepen ties with their security guarantor.

Talks of the possible distribution of Russian passports to ethnic-Armenians in Nagorno-Karabakh could be the last step towards turning Karabakh into a de facto Russian protectorate. A similar scenario to Abkhazia, South Ossetia, Transnistria and Donbas cannot be ruled out according to the head of Karabakh’s national security council Vitaliy Balasanyan, and this would not only justify a military presence beyond the current scope of its peacekeeping mandate, but could eventually rationalise an increase of the Russian contingent should the situation require.

Moscow is actively deepening cultural, military, and economic ties with Nagorno-Karabakh and has now replaced Armenia in becoming the security guarantor for the ethnic Armenians of the Republic of Artsakh, echoing Moscow’s role vis-à-vis breakaway states in Moldova and Georgia.

Putin has no intention of abandoning the Caucasus, and Russia’s unchecked progress in the strategically important and energy-rich South Caucasus is a cause for concern — not only for Moldova, Georgia and even Ukraine — but for the West, which has failed to engage during the conflict.

The absence of international organisations in resolving the conflict and monitoring the trilateral ceasefire agreement prevents international control and accountability over Russian peacekeeping forces and dashes any hope for Western involvement in what Moscow sees as its sphere of influence.

Such passivity allowed Russia to expand its military presence within former Soviet land and revived fears of Russian peacekeepers appearing in eastern Ukraine with little opposition from the West. That would be a preliminary step to total annexation should the current situation escalate in such a dramatic way that Moscow would feel the need to ‘protect’ ethnic Russians, or what Putin calls “co-citizens and compatriots”.

The increased presence of Russian troops in the region in the form of a peacekeeping contingent has shattered all hopes for a rapprochement between Yerevan and Euro-Atlantic structures. It has made Armenia more dependent on Russia without alienating Azerbaijan and has turned the breakaway Republic of Artsakh into a protectorate, further fulfilling Moscow’s long-term regional aspirations.

Furthermore, the ceasefire is just a bandage on a deep historical wound and in no way does it end the conflict between Armenia and Azerbaijan. Instead, this stunted peace temporarily freezes a conflict in which Russia will seek to expand its military and political meddling in its ‘near abroad’.