by Martin Sokolov
in Europe 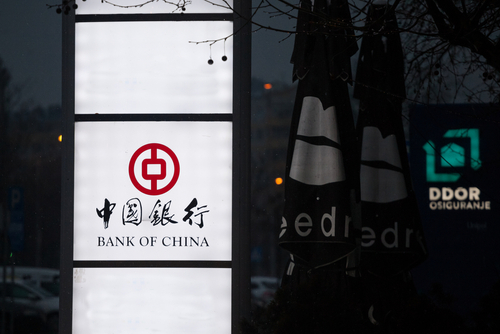 BELGRADE, SERBIA - JANUARY 10, 2018: Bank of China logo on their main office for Serbia. Bank of China is one of the biggest Chinese State Owned banks, investing in Eastern Europe.

Countries in the Balkans are falling into a potential debt trap to Chinese lenders.

Sofia (Brussels Morning) On 26 March 2021, the Deputy Prime Minister of Montenegro, Dritan Abazovic, announced that his country had requested financial assistance from the EU to repay a loan to China’s Export-Import Bank (Exim bank). The credit was for constructing a highway from the port of Bar on the Adriatic Sea to the border with Serbia.

Due to Montenegro’s mountainous terrain, the highway is estimated to be the most expensive road per kilometre in Europe. At the outset, the country’s relatively small economy coupled with the technical challenge triggered concerns for the project’s viability. Since 2014, international financial institutions and rating agencies have signalled their reservations, claiming the project adversely affects the country’s economic profile.

According to Abazovich, Montenegro needed EU assistance to ensure that Chinese influence in the country is contained since such projects usually accompany the understanding that if a loan is not serviced, the collateral is the project itself. The current situation raises broader questions about the vulnerability of Balkan economies to the Chinese debt trap and Beijing’s interests in the region. Most of the countries in the Western Balkans have some degree of engagement in the Belt and Road Initiative (BRI) and China is fronting billions in infrastructural investment.

The construction of the first section of the highway from Smokovac to Matesevo is projected to cost 895 million euros, which is 10% more than the initial forecast. The loan from Exim is about 809 million euros with a 20-year repayment term, a five-year grace period and 2% fixed interest rate. Podgorica began absorbing funds in 2015, and the first tranche of the loan is due in 2021. Abazovic has said that the previous government, loyal to longtime President Milo Djukanovic, had struck a “bad deal” with China, placing the country in a position of possible dependence.

The entire highway from Bar to Boljare is 169.2 kilometres long, while the Smokovac-Matesevo section is 40.8 kilometres long, requiring the construction of 19 tunnels, 36 bridges and viaducts, which represent almost 60% of the total length. The highway is considered the largest civil engineering project in Montenegro and one of the largest projects implemented on the European market. Typically, the construction contract was awarded to the Chinese-owned China Road and Bridge Corporation (CRBC).

To prevent a surge in public debt, the previous Montenegrin government took a series of austerity measures but the Chinese loan increased government debt to over 80% of the country’s GDP, necessitating further tax increases and a partial freeze on public sector wages in 2018. Moreover, economic challenges linked to the global coronavirus pandemic exacerbated the country’s economic crisis as the hard-hit tourism sector accounts for 25% of Montenegro’s GDP.

It is telling that before the deal with Exim bank and CRBC, Podgorica tried and failed to secure Western investment in the project. With a population of about 620,000, Montenegro has low traffic volume and feasibility studies published in 2006 and 2012 by the French company Louis Berger and the American construction company URS suggest the project is not viable. Studies show that viability would require 25,000 vehicles a day but current estimates conclude that traffic is not projected to exceed 6,000 vehicles at the busiest section.

Meanwhile, it was announced that Podgorica would sue CRBC for causing “devastating” damage to the UNESCO-protected Tara river. According to Montenegrin authorities, construction did not comply with the environmental protection regulation and the original specifications of the project, resulting in significant damage along the Tara river.

Additionally, while China itself is often seen as a relatively new ‘player’ in the region, Beijing has maintained close relations with some Balkan countries since 1978. Since the beginning of the new century, the country’s fast-growing economy and ambitions have strengthened its influence in the region.

The Balkans are important to China for three main reasons. First, the region offers new markets with decent growth potential. Second, if Beijing realises its ambitions to restore a strong presence on the Silk Road in the Balkans, it will be able to affirm said dominance along the entirety of the ‘road’. Third, there is no vacuum in international relations.

Given that the countries in the region are unlikely to be integrated into the EU in the medium term, it is understandable that other players will take advantage of such an opportunity. If Beijing succeeds in strengthening its presence and role in the region, it will also likely be able to secure influence in Brussels, which in turn strengthens China’s position as a global player.

Montenegro’s current predicament could lead to a ‘strategic’ compensation for China, as evidenced by China’s approach to other debtors. In 2011, Tajikistan received a loan in exchange for 1,158 square kilometres of disputed territory on the border between the two countries. When Sri Lanka was unable to cover a 1.1 billion dollar loan for the port of Hambantota, Beijing agreed to transfer the necessary funds in exchange for a concession of the port for 99 years.

To secure Chinese investment in the construction of the China-Pakistan Economic Corridor from the port of Gwadar, on the southwestern coast of Balochistan, Pakistan, to the province of Xinjiang, China, Islamabad has agreed to a 40-year concession. Additionally, according to unofficial data, Beijing intends to build a military base in Jiwani, 80 kilometres from Gwadar.

Montenegro is under real threat of falling into a debt trap which, in the long run, poses systemic risks for NATO and the EU. The significance of the Balkan region is not merely economic for Beijing and there is a real question of influence which, if not addressed, will test the resilience of the Euro-Atlantic partnership regionally and possibly more broadly across Europe.

Almost all the countries in the western part of the peninsula are NATO member states but are unlikely to be integrated into the EU in the short term.

This is still in itself a deterring factor for most conventional and asymmetric threats. However, this apparent lack of synergy between NATO and the EU is still problematic in a multipolar environment, which thirsts for foreign direct investment and may be more susceptible to a debt trap with geopolitical significance.