Georgia vs. Russia: Georgia’s bittersweet victory at the European Court of Human Rights

by Tetyana Demyanchuk
in Europe 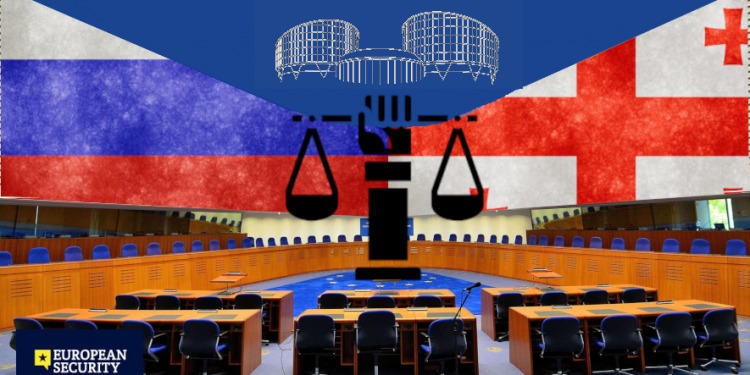 A 2021 European Court of Human Rights ruling found Russia responsible for violations in the five-day war with Georgia in 2008. The result of this twelve-years long legal battle may set a precedent for other cases, including those concerning Nagorno Karabakh and Eastern Ukraine.

Prague (Brussels Morning) On 21 January, the European Court of Human Rights (ECHR) delivered an important judgement on the inter-state case GEORGIA v. RUSSIA (II). The Court ruled in favour of Georgia and found Russia responsible for violating various articles of the European Convention of Human Rights in the immediate aftermath of the conflict. The violations included detaining and torturing individuals and preventing Georgian nationals from returning to their homes in South Ossetia and Abkhazia after the war. The Court further found that Russia has not carried out an effective investigation into the violations that took place.

The August 2008 war ended in less than a week, with Russian soldiers remaining in the Georgian breakaway regions of South Ossetia and Abkhazia. Moscow would later pronounce those regions independent states. In response, Georgia filed a number of lawsuits, trying to hold the Kremlin accountable for violations of the European Convention on Human Rights.

Even though this judgement is undoubtedly a victory for Georgia, this 11-to-6 ‘Solomon Ruling’ leaves a bittersweet taste as it does not recognise alleged human rights violations during the “active phase of hostilities,” as the territories in question were not under Russian jurisdiction.

This was not just a loss for Georgia. The ruling sets a precedent relevant to pending ECHR cases, such as those concerning the conflict in and around the region of Nagorno Karabakh and the conflict in Eastern Ukraine. To understand why, one needs to delve deeper into the ECHR’s decision.

Crucial to understanding the ruling is the Court’s distinction between the period of “active phase of hostilities” (8-12 August 2008) and the subsequent ceasefire period.

After the examination of the case, the Court ruled that Russia did not exercise “effective control” over South Ossetia, Abkhazia and the buffer zone during the “active phase of hostilities”. Hence, Russia had no jurisdiction and is not responsible for many human rights violations, with the exception of the procedural obligation to carry out an adequate investigation into all deaths of arbitrarily detained civilians.

The Court argued that a war zone creates a situation of chaos and it is not possible to talk about “effective control” under those circumstances. The ECHR refers to this principle as a “context of chaos” that emerges during armed confrontation. That is not the case during the ceasefire agreement from 12 August 2008 and until the official withdrawal of Russian troops on 10 October when the Court finds that Russian troops had “effective control” and jurisdiction over the territory. Even after the withdrawal of forces, the continued reliance of these territories on Russia are seen by the Court as “effective control” over these regions.

This judgement is likely to cast its shadow over other ECHR rulings on conflict situations where a “context of chaos” prevails and jurisdiction is contested, i.e., those on Ukraine and Nagorno-Karabakh.

This is a problem as conflicts frequently cannot be clearly divided into neat “phases”. And although it is in conflict control over territory is fluid rather than absolute, especially in the short-term, the concept of “phases” does not capture this complexity. In the example of GEORGIA v. RUSSIA (II), it has been argued that Russia did not have control over some areas on 11 August, but somehow was in total control on 12 August.

Furthermore, the cessation of hostilities does not necessarily mean that the conflict between the two states has ended. In the case GEORGIA v. RUSSIA (II), ‘phases’ were relatively easy to establish, but conflicts do not necessarily stop with the ceasefire agreement and some even continue without formal acknowledgement. This continuance makes the Court’s temporal distinction seem even more arbitrary and very hard to apply.

For example, the case of Eastern Ukraine will be more complicated in many respects, since the 2014 eruption of conflict in the Donetsk and Luhansk regions, control over territories such as the town of Debatlseve went back and forth. A number of ceasefires ensued, followed by periods of hostilities.

The ruling also indicates that the Court’s international rulings are cautious in fear of political backlash that may endanger the Convention. This could set the tone for the credibility of future rulings.

In sum, while the ruling effectively mounts greater pressure on Russia to cease violating Georgia’s sovereignty and territorial integrity and take responsibility for its actions, it leaves us guessing how it will affect future rulings. The outcome of pending cases is now less predictable.