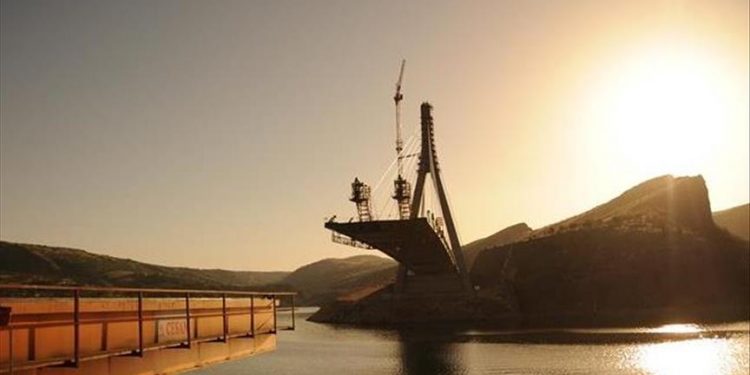 Athens (Brussels Morning) The construction of the Pelješac Bridge could open Croatia up commercially but not everyone in neighbouring Bosnia and Herzegovina is happy with the Chinese-owned project.

The Pelješac Bridge bridges the Croatian coastline that is now divided by a Bosnian enclave. In February, the prime minister of Croatia, Andrej Plenkovic, asserted with confidence that the 550 million euro project in Southern Croatia will be completed by 2022.

The CEO of the Hrvatske Ceste road company, Josip Škorić, echoed this confidence. With the construction of a road junction at Brijest, the bridge will be open for passenger cars and vehicles weighing up to 7.5 tonnes by March 2022. The bridge bypasses the so-called Neum Corridor via Bosnia and Herzegovina, cutting hours from long border crossing checks.

The project is co-financed by the EU with 357 million euros and co-funded by the China Road and Bridge Corporation (CRBC) with a direct investment of 274 million euros. In other words, this is one of the first Belt and Road Initiative European-funded projects.

The project is led by a Chinese consortium while smaller contracts were awarded to Austria’s Strabag and Greece’s Avax for the construction of the access roads to the bridge.

In 1996, Bosnia and Herzegovina and Croatia signed the Neum Agreement in which Croatia was granted unobstructed passage through Neum. However, all traffic passing through the Neum corridor has to undergo border checks on goods and persons.

In 2012, the EU granted Croatia a sum of 200,000 euros for a pre-feasibility study of the construction of the Pelješac Bridge.

Should Croatia join the Schengen Area checks would be considerably more stringent and time-consuming, as the Schengen Borders Code requires passports of all travelers to be electronically scanned against security databases at both entry and exit from the Schengen Area.

The idea of the project, apart from the unification of Croatia’s mainland is that it will allow the bypassing of Neum, thus avoiding the need for border checks.

The Croatian MEP Ruža Tomašić (ECR), born in Bosnia-Herzegovina, notes that in the Bosnian Confederation only Bosniak elites have articulated objections to the Pelješac Bridge projects. Croats have no objections and Serbs just don’t care.

The bridge restores Croatian territorial continuity without limiting access to the sea for Bosnia and Herzegovina. In the long run, Croats argue, the coastal (Bosniak) town of Neum could also benefit.

Bosnia-Herzegovina has long planned for the creation of a commercial pier in Neum, a small town of 5,000 people and the only point of access of the otherwise landlocked country to the sea. That infrastructure project, it is hoped, would allow the country to develop a new cluster of industrial and maritime services.

Tomašić admits that the neighbouring Western Balkans region is not very stable.

“It’s not sustainable for Croatia to heavily rely on the neighboring Bosnia and Herzegovina, which is particularly politically unstable”, she says.

The participation of a Chinese state-owned company raises several concerns about Beijing’s greater foothold to the region. However, should the contractor meet EU standards and places the most competitive bid, the Crotian government would have no grounds to object to the project.

“I must say I’m not too happy with the Chinese state-owned company building the bridge but it seems that the EU and the Government of Croatia have had no concerns over that”, says Tomašić.

“I can live with that if that’s the only way to have the bridge built, but I’d rather have our Croatian companies much more involved in the project,” she adds.