How the pandemic changed the experience and narrative of films

by Tommaso Sgrizzi
in Europe 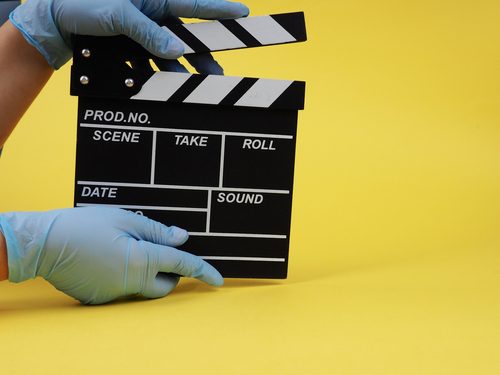 During the period of pandemics, hands in gloves concept of the film industry, a minimalistic composition on a yellow background with glasses and clapperboard. movies and cinema.

The pandemic is itself a story that has altered the cinematic experience, reflects Italian filmmaker Tommaso Sgrizzi for Brussels Morning’s Round the Bloc series.

Sienna (Brussels Morning) It has been exactly one year since Italy went into lockdown as the coronavirus reached our shores. When I look back at the day of the announcement, I remember the hopeful feeling that it would probably be over in a few weeks — months at most. We all know that wasn’t the case and even one year on, the future is still uncertain.

Despite this unknowing feeling, some things have remained constant, such as cinema, which has helped us get through the quarantines and social distancing measures that risked us feeling disconnected.

Cinema itself is a term that’s been facing an ongoing discussion.

The film industry has, above other businesses forced to shutter, been able to survive a closing society, partly in credit to the advent of streaming services in the market, immediately dividing audiences between those who welcomed the innovation and others calling the end of true cinema. For the latter, the essence of a film is intimately and necessarily bound to how we enjoy it. They say, the core of cinema is the collective experience that connects all audience members in the same place and time and for the shared aim of witnessing the same story.

I agree that collective viewing can lead to a different experience from watching the same film alone, but it is also true that the very concept of collectivity has undergone a radical change since the dawn of the Internet and social media. This is striking, especially if we look at the way we experience films today.

Take the release of Mulan (2020), distributed exclusively on Disney+ from last September. Despite the lack of the collective viewing that movie theatres could have given us, a collective experience arose around the movie. Social feeds were flooded by reviews, memes, outraged fans’ posts, enthusiastic discussions, fan art and parodies — and that was just after the movie release, not to mention comments following the pre-hype like trailers, previews and posters.

Even people who hadn’t seen the movie were caught up in the collateral of the film’s collective experience, something that unquestionably goes beyond movie theatres. The fact that the last year has been occupied with only online-releases should be enough to reassure those wary that home viewing is diminishing collectivity in film. Collectivity doesn’t just come from the way we interact with a work of art but also from the stories told.

The year 2020 linked billions of people through the same traumatic event, unprecedented and almost unimaginable had we not all been living through it. Who better than storytellers to help understand such a story, a narrative that goes beyond our own lives, families and communities?

Netflix must have had the same idea when it produced and distributed Italian-Chilean anthology Homemade (2020) as one of the first releases focusing on the quarantine and the pandemic. It was a series of 17 short films written and directed by some of the most talented filmmakers around the world, giving rise to a quirky, lonely, carefree, tender, bitter and sombre portrait of the same collective and yet necessarily personal experience.

Homemade’s experiment proved to me one more time the unfailing talent of cinema to provide clarity among uncertainty, in shining a safe light in the undefinable variety of our experiences — a light we can all look at and marvelously relate to as our own.

As more titles involving the pandemic in some way or other — such as Social Distance (2020), Lockdown All’Italiana (2020), Safer at Home (2021) — it is apparent that our time during the pandemic has spurred the need for more titles to reflect that experience. At the same time, we look to escapism outside of our current reality.

Some of Italy’s popular soap operas like Un Posto al Sole deliberately choose not to reflect the new social distancing reality, masks or mention the pandemic at all within its narrative and content on popular streaming services are still abundant with traditional content.

I think the stories we decide to watch, read and listen to say a lot about how we interact with the actual world out there. They are not only a mirror of our desires, ambitions, hopes, fears and longings but also acknowledge collective feelings that are suddenly visible, jolted out of the usual and familiar space of our individual experience. That is what is truly incredible about cinema; that it can spin out a single story that can reflect thousands of other stories and that power of film has been a glue for many of us during this pandemic.