by Elias Svinos
in Europe 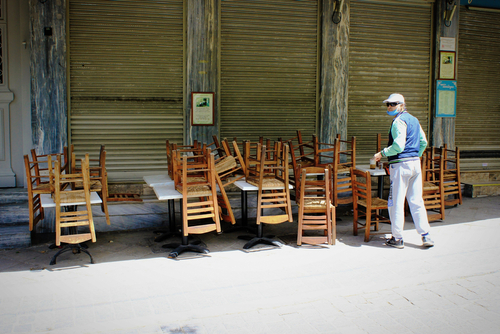 Tables and chairs stacked outside closed cafe-restaurant due the Coronavirus lockdown - Athens, Greece, May 6 2020.

How does an island tourism economy fare in a global pandemic? Kos resident Elias Svinos answers that question for Round the Bloc.

Athens (Brussels Morning) When I moved to Athens, Greece in 2002, I was very optimistic about the country’s prospects for the new millennium. Athens would be hosting the Olympic games again a couple of years later. A new airport had been built and a metro system installed. There were lots of opportunities, and the city was buzzing — Greece was modernising. The euro, as a currency, was still pretty new and the country’s citizens had not yet realised how it would affect their livelihoods and way of life. Just before the country’s debt crisis of 2008, I moved to the island of Kos.

Kos is like heaven on earth; a blessed place, prosperous and lush. It is the island of Hippocrates, the father of medicine. Just across the waters lies Ancient Halicarnassus (today Bodrum, Turkey), where the Greek historian Herodotus was born. Kos has flourished in the Aegean Sea since the beginning of recorded history.

In the modern age, in the 1970’s the first backpackers began arriving on the island, and by the mid 1980’s tourism had become the single most powerful industry on the island, and in the country. In the late 80’s and up until the mid 90’s just about anyone with a plot of land and the means to build had erected their own little family-run “rooms to rent”. Tourism meant easy money, especially when compared to the hardships of the fields and farming.

Kos has been one of Greece’s ‘Top 5’ tourist destinations for over three decades. The early years were times of prosperity and abundance, but the fairytale didn’t last long. Over the last three decades, the global travel industry has become a well-oiled machine and the all-inclusive package holiday a best-seller.

These days, over a million people pass through Kos every year. Annually, thousands of seasonal workers, from the mainland and abroad, flock to the island to cover the staff needs of its many hotels. The game has changed. Today’s travel companies are looking for better deals, which they can secure from bigger hotels, with swimming pools and handicap access, spas and services. Smaller hotels have closed, giving way to massive ones, that have devastated landscapes from north to south, and dominated previously pristine vistas.

Today, up to 60% of the island’s population is directly dependent on the tourist “season” — as referred to by locals — to get by financially. Even if your job isn’t directly involved with tourism, everything is somehow linked to the industry, so a bad tourist season has come to mean a bad winter for the local community. The season traditionally lasts from March to October.

Last year, due to COVID-19, the season opened in June, peaked in August, and ebbed awkwardly into November, following coordinated efforts to extend it. Visitors wore masks in public, as did all those who worked in hospitality. All necessary precautions were taken, but the numbers were down and prospects bleak, so, many hotels and businesses didn’t open at all.

Businesses that did open struggled to break even. Others cut their losses and closed by early September. It was difficult to predict anything; restrictions changed mid-Summer, as did curfews, creating insecurity and making it difficult to plan ahead.

Most seasonal workers struggled to collect 60 work days, the minimum requirement — decreased by COVID — to qualify for unemployment benefits in 2020. Many would not qualify and became dependent on any kind of government or community-based support, to make it through the winter.

The community has mobilised and self-organised, as it had during the Syrian refugee crisis of 2015, and again when it was dealt the blow of a powerful earthquake on 21 July 2017. Both of these summer events had impacted the “tourist season”, but their blow was nothing like that of COVID-19. During 2020, the number of citizens relying on the local municipality and church’s food program has increased by 30%.

In early March 2021, businesses on the island have already started preparing for the next influx of visitors. You can hear the power-drills and see the painters that say: “Summer is coming!” TUI, the global leader of the travel industry, has too much money invested in the area for this summer to tank completely. Yet there is growing discontent among the workforces.

After a year of COVID-19 measures, many are drained financially and at the end of their tether psychosocially. Unemployment and the government’s failure to address issues and disperse financial aid in an effective and timely manner have sent many of the estimated 370,000 travel industry workers into financial collapse.

A year into the health emergency, the underfunded and understaffed Greek National Healthcare Service is working beyond its capacity and essential workers are struggling. Instead of hiring health professionals, the government – while under scrutiny for media misrepresentation and censorship, as well as corruption in the criminal justice system – has increased police recruitment and expenditure and let its right-leaning tendencies run loose, using the occasion of quarantine to pass unpopular laws and reforms with relative ease.

The hospital on Kos cannot handle COVID-19 cases, which are sent to Athens. Many locals fear that tourists will bring mutations of the virus to the islands, that the health system won’t be able to handle. Others believe the prospects for the new season are good. The idea is, everyone has become more aware of what they have to do and the measures that need to be taken.

Widespread vaccinations as a prerequisite for travel will play a part in how this year’s season will play out. No one is expecting anything like the glory days of yesteryear. For now, there will be no line dancing at Greek Nights, and people will probably avoid the customary signs of affection. Hugs and kisses have been put on hold everywhere. It will take a few more seasons for the industry to finds its footing in a post pandemic world.