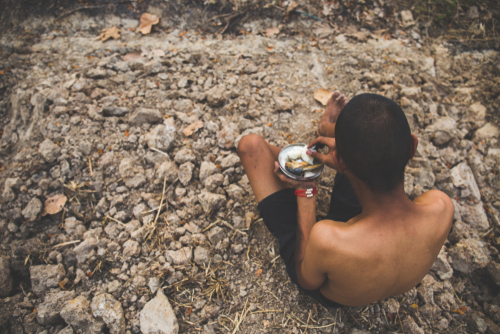 poor child or beggar begging you for help sitting at dirty slum. concept for poverty or hunger people,human rights,donate and charity for underprivileged children in third world

Belgium, (Brussels Morning Newspaper) The world is facing a hunger crisis. Ukraine’s war complicates things in how the EU and other world leaders will respond. Around 20 million tonnes of grain remain stuck inside Ukraine and that, along with high global energy prices, has escalated global food prices.

During this period drought-stricken parts of the Greater Horn of Africa are bracing for a fifth consecutive failed rainy season, which will worsen the crisis which is impacting millions of people.

The forecast for October to December issued at the Greater Horn of Africa Seasonal Climate Outlook Forum shows high chances of drier than average conditions across most parts of the region. In particular, the drought-affected areas of Ethiopia, Kenya, and Somalia are expected to receive significantly below normal rainfall totals until the end of the year.

The European Union and the Horn of Africa have longstanding, deeply political and economic ties, and the region is of undoubted strategic relevance in several aspects, including the political, economic, and commercial ones. However, the area faces a number of similar and critical challenges such as increasing water scarcity, food insecurity, and desertification coupled with low resilience to natural disasters and deepening inequalities, as well as the long-term effects of the COVID-19 pandemic, unresolved ethnic and border disputes, the growing activities of terrorist organizations, and weak national authorities.

The Horn of Africa, as well as the Red Sea and the Gulf of Aden, are turning into areas of primary strategic relevance. Indeed, this macro-region represents a global crossroad and chokepoint for commodities trading, with more than 12% of global seaborne cargo transiting through the Red Sea, and energy flows as approximately 6.2 million barrels of crude oil and other petroleum products transit through the Bab Al-Manded strait every year. For these reasons, several international actors, most notably Russia and China, are competing for increasing their relevance in the region. EU should enlarge its presence to better defend citizens and fundamental human rights.

On this topic, the EU parlament MEP Fabio Massimo Castaldo for Brussles Morning said that we need to move away from the paternalistic approach that has sometimes marked the EU’s engagement with the region, adopting a more egalitarian and mutually beneficial approach to this partnership.

“To achieve that, it will be essential for the EU to base every interaction on a constructive dialogue with the individual countries of the Horn of Africa. We call for a re-focusing on large projects and macro issues, putting the local population at the center of the European interest, with the aim to consistently and tangibly improve their living conditions. Africa needs more Europe and we are here to deliver it” concluded MEP Massimo Castaldo.