Are you ready to remix? Esch-sur-Alzette, European Capital of Culture 2022.

by Lieven Taillie
in Culture and Society 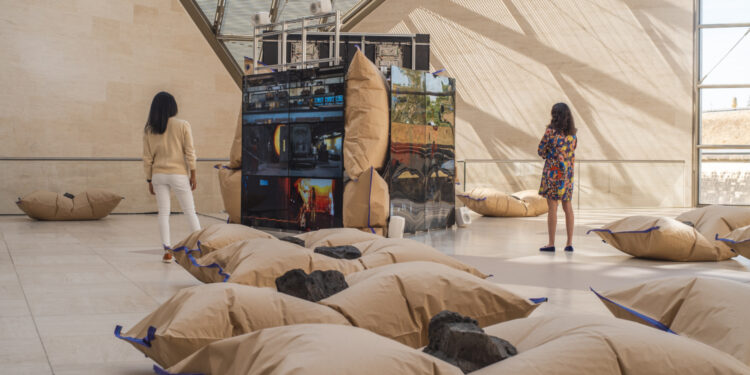 The European Capital of Culture Esch2022 and Mudam Luxembourg have commissioned artist and choreographer Cecilia Bengolea to create a new body of work bringing together dance, performance, sculpture and video installation

Belgium, (Brussels Morning Newspaper) The practice to nominate every calendar year one or now even 3 cities European Capital of Culture goes back to 1985 when Athens first got this honour.

The idea to nominate each year a European city of Culture to counter deficiency of public support for the European project was first brought forward by Melina Mercouri at the time this flamboyant actress, singer, activist, and politician was minister of Culture in her home country, Greece.

She found in Jacques Lang, France’s mythical minister of Culture under President François Mitterand, the perfect allie to convince the then 10 members of the European Economic Community to launch this initiative that has shown over the many years it exists now its effectiveness to communicate meaning about identity and belonging locally but also on a national and European level. Each year a festival of sizable importance not only from a social, cultural, and political viewpoint but also from an economic perspective.

The program developed by Esch-sur-Alzette in the South of Luxemburg, centre of the Minett region, also called the land of the red rocks, confirms this. Esch is the second biggest city of Luxemburg and this year one of the 3 European Capitals of Culture. This region, strongly marked by its industrial past, mostly coal and steel industry, went through some major transformations that are still going on, resulting in a region where the industrial past and new technologies melt into a unique mixture.

This is especially visible in Belval where the most important exhibitions take place. This new city confronts the contemporary architecture of the university and science city buildings with the impressive remnants of the blast furnaces and offers now the ideal scene for all possible kinds of individual and collective remixes: from remix culture, remix nature, remix Europe to remix Future!

As part of its Remix program Esch commissioned in a collaboration with the Mudam Museum in Luxemburg a work by the Argentine artist Cecilia Bengolea who, as we can read on her personal website, sees movement, dance, and performance as animated sculpture.

“The roughness and strength of metal, the hardship of strikes, the mechanical choreography of industrial work and the beauty of dance brought together” as the artist describes it.
Asked when this idea to commission a body of work bringing together dance, performance, sculpture, and video installation to depict a region came up, performance curator Joel Valabraga answers: “Over 18 months ago Vincent Crapon (project manager of the Esch exhibitions) and I decided to work on this new commissioned work. It was really important for us to have a focus on the South of the country and the industrial working class input that is not very explored within Luxemburg. So we invited Cecilia and went with her for several types of visits into this industrial area. We got permission to go and film inside industrial plants in activity.

I think there were many layers of fascination here for Cecilia: the first one in the process of the production and the transformation of steel within this industrial site which she really well linked to alchimie, but also to rituals throughout the world. On the other hand, she was impressed and shocked by what she heard during several sessions of interviews with the workers in the industry. What was very impressive for her was the level of surveillance and the lack of freedom the workers had to respond to tricky questions of her. These were the 2 main elements which convinced her to work on this sort of video installation.”

In the exhibition flyer we read the work is inspired by the artist’s fascination with the mineral origins of our planet and the production of steel as an alluring choreography of the elements reflecting these origins. Describing the industrial production of steel as an ‘alchemie process’, Bengolea maintains that it is not just the orchestration and composition of these elements that interest her ‘but also how they influence and manipulate our bodies, natural cycles and lifestyle’. Dairy Steel thus suggests ‘our intimacy with manufactured heavy objects is non less personal and affective than our intimacy with the metals our body carries’.

“ For me (Joel Valabraga) the body is one the most important elements to tell a story, to have a narrative and in this case especially also the presence of the human, with or without ties in the industrial world. It is so necessary to do so and Bengolea integrated for the first time in her work a new form of dance practice, the ‘Danse libre’ (free dance) developed after WWI in the Swiss ‘Monte Verita in order to find for people a kind of connection with nature. So this is what she is bringing back in relation to the industry. She is trying to bring a link between the joyfulness of life and the hardness of steelwork.”

Asked whether this is also about finding back a relationship with our own physical corps beyond the different new corpses we dispose of in the virtual worlds we are experiencing with our avatars she is swift in her answer: “Absolutely and you really see it because In the tryptic video there is also the presence of an avatar which is the representation of a fictitious body interacting with the industrial site. This game of the real, the non-real, the human, the non-human, the presence, the absence, …is key.” The exhibition is now finished but discussions are going on to make travel this work that exploites relevant themes to our societies with a certain lightness making it thus accessible to a large public.