by Danila Naumov
in Europe 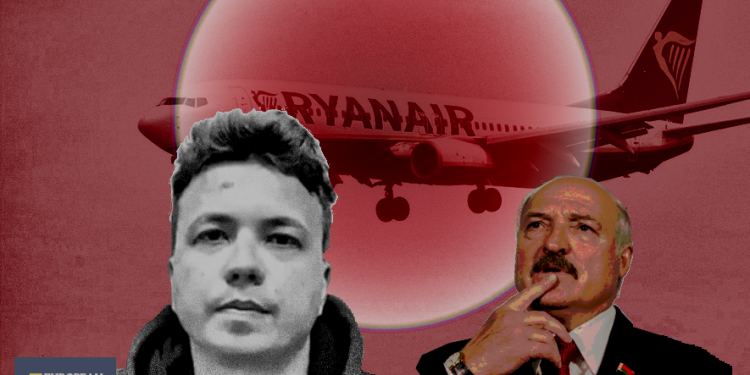 The Ryanair hijacking over Belarus airspace was an audacious act in violation of international law. Minsk’s attempt to deflect any responsibility was crude and amateurish, even by Kremlin standards, writes Danila Naumov.

Prague (Brussels Morning) On Sunday, 23 May, Belarus President Alexander Lukashenko ordered a Ryanair flight en route from Athens to Lithuania via Belarus airspace to be intercepted and grounded. “Escorted” by a Belarusian fighter jet, the commercial plane was forced to land in Minsk. A few hours later, several passengers had disembarked, the flight continued to its original destination.

A prominent member of the Belarusian opposition, Roman Protasevich, had been dragged away together with his partner. Had the pilot not decided to heed the threats, it is quite possible that nothing would have happened. However, from a professional standpoint, the pilot did have to prioritise the safety of the passengers.

Clearly Lukashenko wanted to ground the plane in Minsk to detain a high-profile opposition member but by doing so Belarus opened a political Pandora’s box. Such an infringement on the rights of a foreign national and the security of Europe’s biggest aviation company was bound to create an international backlash. That is why it is important to find a plausible scenario justifying this transgression, to make the event appear technically inevitable rather than the outcome of an authoritarian whim.

However, without the Russian know-how for disseminating disinformation and carefully building a narrative of plausible deniability, Lukashenko has come up with the crudest of excuses. The official reason cited for hijacking the aircraft was that Minsk airport had received an e-mail alert about a bomb threat.

As was later alleged by an insistent Belarus government, Hamas had alerted Ryanair of a bomb on board by way of retaliation for the EU’s sustained support for the state of Israel. It was mere coincidence that the passengers on that very plane included a high-profile opposition member, his girlfriend and, presumably, several Russian agents who exited the grounded plane and never re-embarked despite Minsk never having been the flight’s destination.

Several days later, on Wednesday, Lukashenko added to the surrealism of his initial account, by claiming that the bomb alert originated from Switzerland. This was seen as a further attempt to shift the blame away from Lukashenko’s regime, with little regard for how outlandish those claims appeared to be.

Regardless of Russian involvement, the whole incident attests to Lukashenko’s incompetence in handling the international scandal. In an official statement, Hamas rejected any involvement with the incident.

Despite his closer than ever ties with the Kremlin, Lukashenko has yet to learn the tricks of the deniability trade that Russia has perfected over the years. The reasons for his ineptness are numerous, perhaps the most telling being that such expertise is acquired and developed through experiences that Belarus had never previously been exposed to. Until the protests and unrest in Belarus began in August 2020, Lukashenko had maintained a rather low profile, at least with regard to western media.

Since then, Lukashenko has been feeling increasingly insecure and so all the more prone to resorting to drastic measures in order to retain control over the country. Russia is the only neighbour that is willing to help him, in exchange for loyalty to the Kremlin. Despite Lukashenko’s previous willingness to cooperate and integrate with Europe, staying in power is a greater priority. Therefore, the relationship with Russia has become increasingly exclusive.

A desperate Lukashenko lacks the human resources to help sustain his controversial claim to incumbency or to weather this wholly predictable international crisis. Lukashenko still lives in a long-gone Soviet world, where bullying and scapegoating was an integral part of governance. The rest of the world is not impressed.

Lukashenko has long assumed the role of the strong male chief, dismissing female presidents as “too fragile”. Macho statecraft appeals to his core group of supporters and is in line with the image of a manly state that guards the nation with loyal “militia”, the Soviet-era term for police. Lukashenko himself often strikes iconic poses with an AK-47 assault rifle in an unsubtle display of the masculinity required of an authoritarian leader.

Unlike Putin, whose image is that of a strong albeit shrewd political leader, Lukashenko lacks any intellectually coherent claim to power. His methods are crude and all-too-obvious. This brute force narrative has served him well in domestic politics, where he can control the media and detain his critics, but its crude shortcomings are all too obvious when viewed by international audiences.

Despite the many Russian advisers in Belarus, it seems they have yet to teach their opposite numbers the art of shielding themselves from foreign discontent when fabricating self-serving evidence. The plan to intercept the plane was primitive at best and clearly was not backstopped by a damage control strategy.

Russia approaches its scandals with more care and refined strategic considerations, as seen in the case of the Vrbetice ammo-depot explosion. In that instance, Moscow not only effectively denied its involvement, challenging the Czech Republic to present evidence to the contrary but was able to shift the blame so effectively that it turned the whole affair into a public relations liability for Prague. The Czech Republic case may be unique, but the operational techniques the Russians apply when dealing with foreign pressure are all too familiar.

The Kremlin claimed the Czechs were operating under false pretences and serving the interest of Brussels and Washington, a classic example of the blame-shifting game. The strategy also entailed involving domestic actors, such as the Czech President, Milos Zeman, who brought the authority of the official inquiry into question by offering his own conclusions. In this way, Moscow was able to present the whole case to the public as an internal Czech fabrication that had nothing to do with Russia and to claim that the Kremlin had been the victim of a hostile campaign. Moreover, the ensuing controversy allowed many countries to maintain a “neutral stance” rather than act in solidarity.

While Russia inflicts grievances on its foes, it always paints itself either as a defender of the people, a narrative with Stalinist-era echoes or current activities in the Donbass or it portrays itself as a victim of anti-Russian policies by the West. The Kremlin has competent, intelligent people working on its image as a bastion of truth and defender of morality and faith against the West. This strategy is supported by a strong media ecosystem that creates and distributes the narrative both domestically and externally.

Russia not only preys on the fears of its own citizens; it also preys on the polarities of other societies and political systems. In comparison, Lukashenko cannot turn his enemies against themselves — he has never done that before. All this “active international condemnation” is extremely new to him and it appears that with the Ryanair debacle his regime has shot itself in the foot. Assuming he manages to cling to power, such blatantly false narratives are likely to dominate Belarussian public discourse. It will take years for him to cultivate deniability know-how that is both sophisticated and plausible.

The original version of this article was published at the European Security Journal, Prague.