No solution in sight for Kosovo-Serbia licence plate dispute 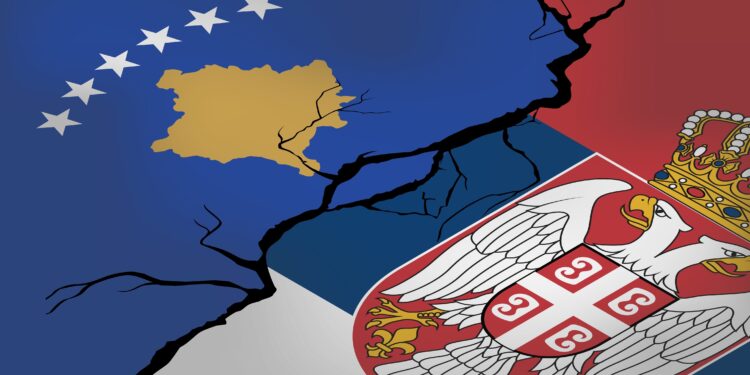 Belgium (Brussels Morning Newspaper) No solution was found for resolving the growing dispute between Serbia and Kosovo over the latter’s licence plate regulations, even after leaders of both countries held emergency talks in Brussels on Monday in a meeting with High Representative Josep Borrell.

According to Borrell, his meeting with Serbian President Aleksandar Vučić and Kosovo’s Prime Minister Albin Kurti lasted more than eight hours, starting early in the morning, but it ended without the two parties agreeing on a solution.

“Since last summer, we have been preoccupied with permanent crisis management, trying to avoid one artificial deadline after another: from deadline to deadline, from crisis to crisis,” said Borrell in a press release.

“This means that we have not been able to address the real issue. The real issue is the normalisation of relations, which would resolve and prevent such crises situations – as the root causes go way beyond licence plates. I made it very clear to both Parties that we cannot continue like this, that this vicious circle of crises and deadlines must stop,” said Borrell.

The latest dispute between Belgrade and Priština started as Kosovo introduced regulation requiring all cars registered in Kosovo’s northern region, which has a majority Serbian population, to have licence plates issued by the Kosovar authorities. Many Serb drivers in the region are using licence plates issued by authorities in Serbia, which continue to regard Kosovo as part of its territory.

For Kosovo, the dispute stems from Serbian authorities operating a parallel state system, issuing licence plates, personal identification and other documents for Serbs living in Kosovo. However, Kosovo’s solution of introducing a requirement to switch out Serbian licence plates for Kosovar plates was met with a wave of protests and mass resignations of hundreds of ethnic Serb officials – police officers, judges, prosecutors and other state workers.

“This leaves a very dangerous security vacuum, a vacuum on the ground, in an already very fragile situation,” said Borrell. “Yes, we have a Mission there, we have the EULEX Mission and, also, the troops of KFOR are present, but they cannot take over the role of the local police: it is not in their mandate nor in their capacities.”

Current tensions between ethnic Serbs and Kosovars are rooted in the bloody Kosovo war at the turn of the century, which saw NATO launch a campaign of air strikes against Serbia to force Belgrade to end its campaign in Kosovo. A peace treaty reached in 1999 led to years of UN-led talks on the future status of the Serbian province, which failed to resolve key issues. Kosovo unilaterally declared independence in 2008, but its international status remains disputed, as a number of EU countries still refuse to recognise its independence.

Borrell met with Kurti and Vučić separately in Paris last weekend, warning both not to start another conflict on European soil, and to find a mutually acceptable agreement before 21 November, when the Kosovar police are expected to start issuing fines to drivers with Serbian-issued licence plates for Kosovar cities.

On Monday, following the failed attempt to reach an agreement, Borrell noted that the EU-proposed solution was accepted by Vučić but rejected by Kurti. Lacking agreement, Borrell urged Kosovo to delay imposing fines, and Serbia to suspend issuing new licence plates for Kosovo’s cities.

Borrell noted that he would inform the Member States and the Council of Foreign Affairs “about the behaviour of different parties and the lack of respect for international legal obligations,” adding that “this goes particularly for Kosovo.”

“I made it very clear to both leaders that if the European Union accession is their ultimate objective, one to which they have both committed, we expect them to act accordingly with that,” said Borrell.

Tags: Brussels LatestKosovo i MetohijaMain-Slider
No Result
View All Result