The Assange case: reporting crimes is not a crime 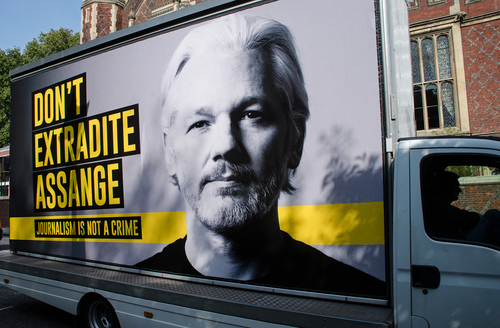 Brussels (Brussels Morning) Letting citizens know the truth cannot be considered a crime. If the European Parliament cares about respect for the rule of law, it should start by defending Julian Assange and demanding his immediate release. His situation is not acceptable to countries that call themselves democratic.

A few days ago, I met John Shipton, Julian Assange’s father, at the European Parliament. He is a calm and tenacious person who, with great dignity, continues the fight for the release of his son, whose psychological and physical condition becomes increasingly precarious by the day. It is not just the state of health of the founder of Wikileaks that worries us, but also that of democracies in general and freedom of information per se, because they related specifically to the work of a journalist and activist who has exposed crimes and background stories that we otherwise would not have known about.

Wikileaks has published information that has proven inconvenient for many governments, including that of the United States, and it is for this that Assange has been condemned to a disproportionate sentence: 175 years in prison. One cannot be considered a criminal for having denounced crimes. Yet Assange has been imprisoned for years, first in the Ecuadorian embassy in London and now in a British maximum security gaol, where he is treated as a dangerous terrorist.

For this reason, I offered John Shipton my full support, both as an MEP and as a journalist, to continue the fight for the release of his son Julian Assange.

The release and protection of Mr Assange is not only a human rights battle. It also represents a battle for the right to information and, as such, serves as an important cornerstone for future battles of the same kind. Moreover, Assange’s arrest bears all the hallmarks of a vendetta and serves as a warning to those working in investigative journalism. His situation comes with a subliminal message, as if to say: “Today — to him, tomorrow — maybe to you.” Wikileaks released news of public interest, including accounts of several serious war crimes committed in Iraq and Afghanistan, just as independent newspapers and media do.

The arrest, the prolonged psychological torture, the arbitrary and suspicious legal and governmental manoeuvres to frame Assange, constitute the most egregious violation of press freedom the world has experienced in the last decade. In 2019, Nils Melzer, the UN’s Special Envoy Against Torture, accused Britain, Sweden, Ecuador and the United States of psychological torture in connection with the Assange case.

For the UN, Assange’s extradition to the US must also be prohibited. His detention is unjust and unjustified. Recent revelations about a CIA plot to assassinate the Wikileaks founder during Trump’s term in office have caused a stir. Unfortunately, no different signals have come from the Biden administration. The idea that the Assange case concerns only the United States is not acceptable. And in a few days, a British court could deliver a verdict on Assange’s fate.

European institutions must respond clearly at a political level to the Assange case in order to ensure not just his release, but also adequate standards of protection overall. Otherwise, in situations where EU institutions talk about respect for the rule of law, they would no longer have any credibility.

Both citizens and the media, including those who publish news like Wikileaks, must stay alert to and sustain the highest levels of awareness about disgraceful episodes such as this that are so and wounding and so damaging to the very concept of democracy.