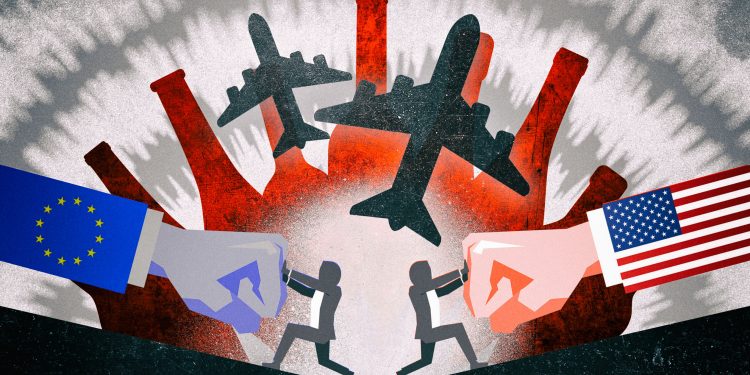 Brussels (Brussels Morning) The EU Council has approved a tariff package with the US, with both sides having made small concessions. According to a Council press release yesterday, Wednesday, the EU is to drop customs duties on imports of lobsters from the US, while the US will lower duties on some imports from the bloc.

The Council stated that the move is aimed at improving trade relations between the EU and the US, and that the tariff package represents the first reduction of duties in the last 20 years or so. The move was approved by EU ambassadors on Wednesday and will be sent for adoption to the EU Parliament, which should vote on the package at the plenary session slated for Monday.

Germany’s Minister for Economic Affairs and Energy Peter Altmaier pointed out that both sides stand to gain from the package, which will lower the cost of imports in the midst of the coronavirus pandemic. EU-US trade is worth more than 1.3 trillion euro annually, he said, making it the most important trade partnership in the world. Altmaier indicated that it was time to further strengthen this partnership and to address outstanding disputes between the bloc and the US.

The Committee of Permanent Representatives greenlighted the joint statement by the EU and the US which aims to reduce and scrap tariffs and is expected to lower US tariffs on imports from the EU worth approximately US$ 160 million. The move targets tariffs on prepared meals, crystal glassware, surface preparations, propellant powders, lighters and lighter parts.

At the same time, the move should lower EU tariffs on imports from the US by about US$ 111 million, including live lobsters and frozen lobster products. Both the EU and the US are to implement these changes in line with existing commitments and the measures will be applied retroactively from 1 August this year, for a period of five years.

In an interview with CNN last Friday, France’s Minister of the Economy, Finance and Recovery, Bruno Le Maire, said he believed that a compromise on EU-US sanctions over Boeing and Airbus could be reached the coming weeks, Reuters reported.

The EU had announced retaliatory tariffs earlier last week, on US exports worth up to US$ 4 billion, after the World Trade Organisation (WTO) approved the move last month. Le Maire pointed out it will be difficult to reach compromise, but pledged he would not spare efforts to reach it as the move is in the interest of both sides.