How many journalists were killed in your country last year? 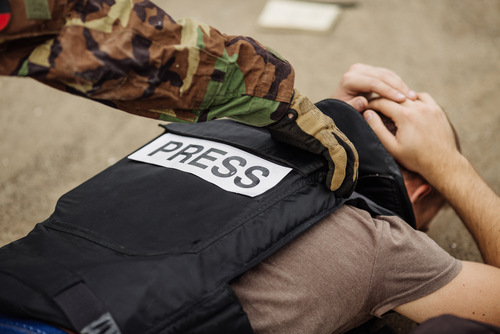 Because of the global correlation between journalist assassinations and corruption, there needs to be higher expectations of media protection in Europe.

Thessaloniki (Brussels Morning) If you want to perform a quick health check on the quality of democracy and media freedom in your country, just count how many journalists were killed the previous year. For Reporters Without Borders (RSF) this test constitutes an indicator of particular gravity in the compilation of the World Press Freedom Index, which it publishes on a yearly basis.

Their 2021 World Press Freedom Index shows that journalism is completely or partially blocked in 73% of the 180 countries ranked, with dramatic deterioration in people’s access to information and an increase in obstacles to news coverage. The pandemic has been used as grounds to block journalists’ access to information sources and reporting in the field, RSF note, wondering whether access shall be restored when the pandemic is over.

Europe, along with the Americas, continues to be among the most favourable continents for press freedom. Scandinavian countries occupy the top three positions of the 2021 Index with Denmark ranking fourth. However, Europe still struggles to defend its own values. It registered a sizeable deterioration in the “abuses” indicator, with acts of violence, including attacks against journalists and arbitrary arrests, more than doubling in the EU, the Balkans, and Central Eastern Europe weighing heavily on Europe’s performance.

Across the continent, new regulations limit the right to information, facilitating the arrest and detention of journalists, thus, limiting inter alia the flow of information on life-or-death issues, such as the pandemic. Coverage of migration issues has also proven a sensitive issue for Southern European governments.

Impunity for crimes of violence against journalists is a problem throughout Europe and not only in Malta, where just one man was convicted in 2020 for the murder of the journalist Daphne Caruana Galizia. Hungary is also setting a negative trend on the freedom of speech agenda, which tends to be followed by other EU member states and states negotiating accession.

The UK’s refusal to extradite Wikileaks founder Julian Assange to the US was celebrated as a victory of democracy by many actors – not by RSF, though, who notably underline that the legal grounds for the refusal of the extradition were rather superfluous and certainly do not uphold European values. Assange was not extradited, due to potential threats against his mental health and not on the grounds of protecting public-interest journalism and free speech. The prospect of amelioration of Assange’s mental health in a high-security prison is highly questionable.

Media pluralism and freedom undoubtedly constitute cornerstones of the rule of law in every country and it is for this reason that these parameters are addressed in the annual EU Rule of Law Report of the European Commission. Freedom of speech is one of the four major pillars of the rule of law in the EU, the other three being justice, anti-corruption, checks and balances.

While all EU Member States have legal frameworks in place to protect media freedom and pluralism and EU citizens generally enjoy high standards of access to information, the pandemic revealed that crises can be used as a pretext to undermine fundamental rights and freedoms for political purposes, according to the 2020 report. The situation is particularly difficult for vulnerable smaller players and local media outlets.

The strength and diversity of the media sector within the EU is at risk. More specifically, the report poses concerns with regard to media politicisation in Hungary, Malta  and Poland and concerns about the effectiveness of national media broadcasters in Bulgaria, Greece, Luxembourg, Romania and Slovenia. Transparency of media ownership, which is traditionally considered as a sine-qua-non precondition for any reliable analysis, is still at issue in the Czech Republic, Cyprus and Bulgaria.

State-funded advertising is an important source of support to media and, therefore, fair and transparent rules on the distribution of state resources is a safeguard of non-exertion of undue political influence over media; Austria, Hungary and Slovakia are still troubled by the absence of such rules, given in particular the significant amounts spent by their governments in advertising. The lack of effective regulations against political interference and ownership of media by political actors pose serious threats to media freedom and pluralism in at least Bulgaria, Hungary, Malta and Poland.

Given the above, it was no surprise that, on 3 May, the EU Commission Vice-President, Vera Jourova, in marking the celebration of the World Press Freedom Day, noted that better EU tools are needed to protect media freedom as a pillar of democracy rather than just a player in the national economy, committing to discuss the issue with Commissioner Thierry Breton, responsible for the Single Market. The plan is to draft a “media freedom act”, so as to grant the EU the means to protect press freedom across Europe.